Not Forgetting, But Forgiving

Posted on October 29, 2011 by seanarthurjoyce

“Forgiving does not erase the bitter past. A healed memory is not a deleted memory. Instead, forgiving what we cannot forget creates a new way to remember. We change the memory of our past into a hope for our future.”

—Lewis B. Smedes, quotation displayed in the Okanagan Heritage Museum, Kelowna, BC, for Art from Memory: Art Inspired by the Stories of World War Two Veterans, October 19, 2011

We seem to be in a time of healing. It’s an odd thing to say with the massive social upheavals going on everywhere in the world. Medicine wheel teacher Duncan Grady has said that his Montana Blackfeet elders see this time as an unfolding of ancestral prophecies—what they call “windy times”—and strangely enough, healing is also a part of it. The elders advise us to “stay out of the tops of the trees,” i.e. our heads, and instead try to centre ourselves in the heart. Not forgetting, then, but forgiving. 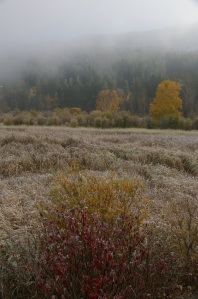 Lifting the fog of collective memory to reveal the stories of 'home children.' Photo Sean Arthur Joyce, near Golden, BC

At the Minto House B&B where Anne and I stayed in Revelstoke, when I explained ‘home children’ to the other two guests, the woman (who is Croatian) said that the government had recently apologized to Croatians who were interned in Canada during the First World War. When I visited the Vernon Museum and Archives I discovered that there were internment camps for anyone with an Austrian passport—mostly Ukrainians as it turned out—at Vernon, Fernie, Edgewood, and other BC Interior towns during that war. Others I’ve spoken to at my presentations have mentioned the restitution made to Japanese-Canadians. And now, we have at last the Australian and British governments’ apologies to the child immigrants and their families.

Yet Canada—as a political entity—remains unwilling to come to terms with the ghosts of its ‘home children.’ Well, you either roll with the tide of history or get blown away by its tsunami, as I wrote in On the Wrong Side of History. British PM Gordon Brown’s apology last year has opened the floodgates whether Harper’s Gang wants it or not. And before that, former Australian PM Kevin Rudd had the cohones to apologize for the horror show the Australian child immigrants suffered. The good news is, people are waking up well ahead of their governments, as the Occupy Wall St. movement is proving.

In the process of giving my Laying the Children’s Ghosts to Rest presentations, I’ve met nearly a dozen people now with ‘home children’ in their past. What I see in their faces when we talk afterwards is gratitude, even joy. As if being gently swept along with the zeitgeist, many are researching their child immigrant ancestors. Some are just starting, others already have some impressive documentation, still others are learning things they never knew before about their ancestors. That takes courage and emotional integrity. Some ghosts are not so pretty. Nearly all have said my talks have taught them much they didn’t know about the history of British child emigration. For some, even a single anecdote has suddenly sprung to life as a tantalizing clue to a ‘home child’ ancestor’s past. That alone is rewarding for me. As I said to the audience in Golden, I only hope we can tease open the doors so these ‘home children’ are no longer people without a history, ‘The Man (or Woman) Without Stories.’

The reality is, sometimes research leads you down blind alleys. I found absolutely nothing in the Windermere Valley Museum archives on ‘home children.’ This possibility had occurred to me, but that likely puts the final nail in the coffin of the idea there were child immigrants sent to the Columbia Basin. It seemed a reasonable possibility they may have worked on farms in the Creston or Windermere valleys. The federal government operated an Experimental Station for agriculture in Windermere during the 1920s and ’30s, a natural destination at least for a handful of child immigrant workers. But nothing. Naturally I didn’t expect to find any living ‘home children’ at this late date. I realized early that I would likely be talking mostly to descendants who themselves had migrated to the Basin, but had an interest in preserving their family stories. Or should I say, piecing back together a picture from many shattered pieces.

During my presentation in the Golden Public Library I discussed the importance of the public apologies that were made by the Australian and British former Prime Ministers, and the restitution funds made available to assist ‘home child’ families to reconnect. One woman wondered whether that was really so important, given that in Canada at least, most of the ‘home children’ are dead now. Before I could answer, another woman who appeared to be at least partly of native ancestry said, “I think it is important, because it gives me hope, what you’re doing, that the human race does the right thing every once in awhile.”

What was striking for me at this session was the fact that seated side by side were two descendants of home children with very different experiences. Lynda Seeney’s grandfather John Henry Bowbrick had a very positive experience. He arrived on the steamship Carthaginian in May 1895 and by 1901 was working on a farm near Blyth, Ontario. The family treated him kindly, almost like a son, and he stayed until 1902. His parents came later with government assistance to settle in Bertle, Manitoba and later, Lethbridge, Alberta. As an adult he went on to become an MP. Understandably, he spoke quite openly of his experience as a ‘home child.’

Shelley Macklin, by contrast, said her grandfather was “treated like dirt.” As has been related in other ‘home children’ accounts, she said he was made to sleep in the barn with the animals. Stories of these children being beaten seemed to resonate with her too, though others present seemed shocked by that. Another woman said she found it hard to accept that so many Canadians treated the ‘home children’ so badly, as it’s a poor reflection on us as a people. Shelley answered (before I could) that the concept of children in the 19th century was very different than it is now, that they basically had no rights. Corporal punishment for children was the norm. And under the terms of the contracts signed by the farmers, they had complete authority over the child. There were cases when abuse came to light, and these children were removed from those homes by the emigrating society or the authorities. 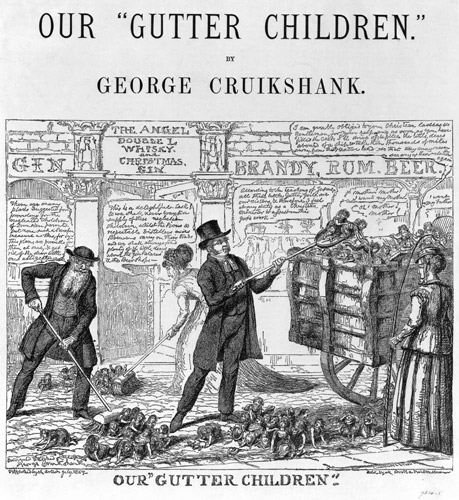 Cruikshank's 1869 editorial cartoon depicting citizens scooping children off the streets like refuse. Lady with whip is saying: "I am greatly obliged to you, Christian ladies and gentlemen for your help and as soon as you have filled the cart I'll drive off and pitch the little dears aboard of a ship and take them thousands of miles away from their native land so that they may never see any of their relations again."

In Revelstoke the issue arose of Tom Fulcko’s father being raised in an orphanage in New Westminster, BC. (Years later he and his father went to look for it but it had been torn down.) Glen McGregor wondered what conditions were like in Canadian orphanages compared to British institutions. There too, the issue of cultural mores arose, and I pointed out that there were contemporary critics of child emigration (although few) such as Andrew Doyle (1875), JJ Kelso (1890s), and even earlier, Cruikshank the editorial cartoonist in the 1860s.

With Kelso heading up the Ontario government’s new child welfare agency around the turn of the 19th/20th century, the tide began to shift, although child emigration seemed to enjoy a boom period in the early 1900s, at least until the outbreak of the First World War. Another critical turning point was the passing of the order-in-council in Ottawa in 1924 banning immigration into Canada of children under age 14 unless accompanied by a parent. (Passed into law in 1925.) Yet even this ban was barely enforced, since the following year some 4,000 children were sent as child immigrants to Canada, my grandfather Cyril Joyce among them. The Great Depression slowed the flow of children considerably during the 1930s, although a special exemption was made for the Fairbridge Farm Schools.

As Roger Kershaw and Janet Sacks write in New Lives for Old (National Archives UK, 2008, p. 192): “Before 1914 Canada remained the destination of most children, as in the previous century, but the mood was changing in the 1920s, with the opposition to young, unaccompanied migrants significantly increased. In 1924 the Director of the Canadian Council on Child Welfare, Charlotte Whitton, denounced the practice at a convention of the magnificently titled Imperial Order of the Daughters of the Empire (IODE), demanding, ‘Why are so many children being brought to Canada? …The only fair inference is that juvenile immigrants are being sought for placements in homes and on conditions which the Canadian authorities will not accept for our children.’ She went on to describe the use of children in farm work as ‘a cheap labour that approaches perilously near a form of slavery.’”

Well, it turns out I started shopping at the Nelson IODE Thrift Store as a teen in the ’70s and for many years afterward. I always knew there was another reason to love those little old ladies at the IODE! But it seems that they have been among many generous contributors to the healing of child immigrants’ ghosts. By trying to snatch their stories from the jaws of time and oblivion, we do as Smedes said in the excellent quotation prefacing this article, and, by forgiving, begin to find a new way to remember.

I am a poet, journalist and author with a strong commitment to the environment and social justice. If anything, I have too many interests and too little time in a day to pursue them all. Film, poetry, literature, music, mythology, and history probably top the list. My musical interests lie firmly in rock and blues with a smattering of folk and world music. I consider myself lucky to have lived during the great flowering of modern rock music during its Golden Age in the late 1960s/early '70s. In poetry my major inspirations are Dylan Thomas, Rilke, Neruda and the early 20th century British/American poets: Auden, Eliot, Cummings. My preferred cinema includes the great French auteurs, Kirosawa, Orson Welles, and Film Noir. My preferred social causes are too numerous to mention but include banning GMOs, eliminating poverty (ha-ha), and a sane approach to forest conservation and resource extraction. Wish me—wish us all—luck on that one!
View all posts by seanarthurjoyce →
This entry was posted in Activism and tagged child immigrants, civilization, empathy, history, home children, social commentary. Bookmark the permalink.