Posted on November 26, 2011 by seanarthurjoyce

I don’t mind saying it: when it comes to popular music I’m hopelessly stuck in the past. Okay, maybe not hopelessly stuck. I’m a big fan of Sam Roberts, Dominique Fraissard, Coco Love Alcorn, Derek Trucks, Jeff Martin, The Tea Party, and U2. But with the exception of Coco and Dominique, you’ll note that most of these artists have something in common: a sound forged in the golden age of blues and rock ’n roll. That era peaked in the 1967-74 period and—except for brief flashes of genius here and there—has gone downhill ever since, in my view. I’ve often pondered why that might be so—and no, me getting older isn’t it. About the only explanation I can offer is two-pronged: the increasing corporatization of music that occurred prior to the downloadable era, with increasing pressure to put commercial over artistic interests; and the general dumbing-down of society and its inevitable diminishment of imagination.

Johnny Winter at the Charles Bailey Theatre in Trail, BC, October 11, 2011. Still alive and well despite appearances.

So you can appreciate what a treat it is to see one of the living legends of that golden era right in your own backyard. For my birthday this year I was treated to concert tickets to see Johnny Winter in Trail’s Charles Bailey Theatre October 11. (This is one late review.) The show opened with a solo set by David Gogo, who was feeling relaxed and chatty, with just the right amount of between-song road stories. It’s been a long road from sneaking into Vancouver’s Commodore Theatre to see Johnny as an underage fan to opening for him on his current tour. Gogo said he found it a bit “surreal” to be on the tour bus with one of his mentors, “watching him eat meatloaf while we watch Alien Predator.”

David Gogo explains the history behind his vintage 1930 National Steel guitar, complete with original Hawaiian scene etched on the back.

Gogo has now done 30 shows with Winter and it’s a match made in Blues Heaven: An hour of Gogo’s expertly played acoustic blues, reeling out originals and old standards with equal intensity; followed by a fully electric show by the master himself, accompanied by Paul Nelson on guitar, Scott Spray on bass, and Vito Liuzzi on drums. Gogo’s lightning fingers and sweet ’n tasty slide guitar work had the audience cheering for classic tunes like In My Time of Dying, Dust My Broom, As the Crow Flies and lesser-known oldies like Aberdeen, Mississippi. But his blues originals are just as compelling: She’s Breakin’ Through, about a BC mining disaster, It’s Killing Me, and That’s How Strong My Love Is.

Johnny Winter was led onstage with the help of Paul Nelson, and once seated, launched his non-stop set like a rocket burning on all fuel tanks with the Freddie King classic Hideaway. Although it’s shocking to see how physically diminished he’s become in his old age, his playing is as ripping as ever. In a rare move since the glory days of his career in the ’70s, Winter included a number of his favourite rock ’n roll classics: Good Morning Little Schoolgirl, Johnny B. Goode, and Bony Morony—all done at triple speed. Johnny has always been a fast player live, but I felt he could have slowed the pace a little and not lost any of his edge. His voice, on the other hand, has not aged quite so well. The characteristic Texan growl is still there from time to time, but much diminished, sadly. 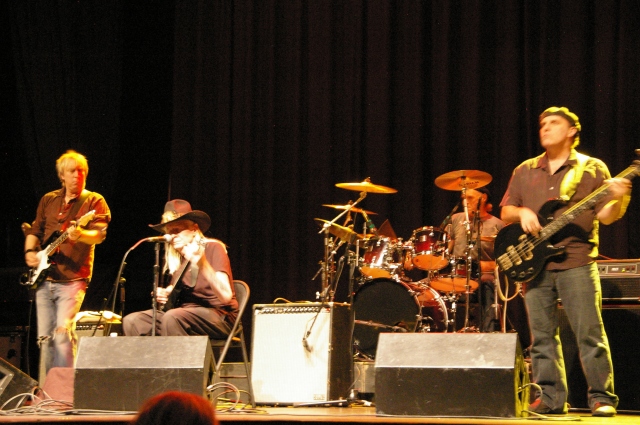 Naturally the blues held centre stage for most of the set, with old standards like Tore Down, Don’t Take Advantage of Me, and the Ray Charles number Blackjack. I’ve never been a fan of the sound of the Lazer guitar Johnny plays; it sounds too electro-metallic and hard-edged to me. Thankfully, he brought out his trademark Gibson Firebird for the Robert Johnson number Dust My Broom. The mellow yet raunchy sweetness of tone created by Gibson pickups, combined with Johnny’s slide mastery, is a reminder of what made him a legend in the first place. The show’s encore brought us to our feet with the Bob Dylan classic Highway 61 Revisited, as only Johnny Winter can perform it—a full-tilt slide blues number.

Johnny Winter's new album 'Roots' is as good as anything he's ever done.

Johnny’s current band is as good as it gets for a blues outfit. Scott Spray’s walking bass lines are smooth and silky as liquid chocolate, keeping up effortlessly with Winter’s triple-speed guitar licks. Vito Liuzzi’s tasteful percussion work adds just the right amount of fills to what is admittedly a thankless genre for most drummers. Paul Nelson’s guitar work is strictly there as support for Johnny except in the instrumental opening to the show, where his lead work shines.

Nelson, another younger musician like Gogo who grew up with a deep admiration for Johnny Winter, has single-handedly revived his career after a former manager nearly destroyed him. (That story is well worth reading: http://www.getreadytorock.com/rock_stars/paul_nelson.htm) It’s another grace note in a chorus of giving back that seems to have arisen amongst masters and mentors of music lately, along with initiatives like Eric Clapton’s Crossroads guitar festivals. (http://crossroadsguitarfestival.com/) We can thank Eric for exposing the world to the phenomenal talents of guitarists like Sonny Landreth—a virtual unknown before performing at Crossroads—as well as Doyle Bramhall, Derek Trucks, Susan Tedeschi and Robert Randolph. In a nice case of the karmic wheel returning favour for favour, Nelson’s rescue echoes what Winter did for blues giant Muddy Waters in the early ’80s, reviving his career and producing some of his best albums.

Now Nelson has returned the favour, producing Johnny’s latest album Roots, with a Who’s Who of Musicians guesting. (See: http://www.johnnywinter.net/) The result ranks among his best albums, along with my personal all-time favourite Still Alive and Well. In contrast to his blisteringly fast live set, Johnny on both these albums allows himself a more relaxed pace, which on Roots especially allows his voice a bit more room to flex. The unmistakable overtones of Sonny Landreth’s innovative slide technique grace the opening cut T Bone Shuffle, and Allman Brothers alumni Warren Haynes adds his honeyed Gibson slide tone to Done Somebody Wrong. In a nod to his own blues hero Muddy Waters, Johnny does Got My Mojo Workin’, made especially sweet by the harmonica of Frank Latorre. This number is followed by another blues harp virtuoso performance, this time by John Popper on Last Night. Bright Lights, Big City unites Winter with singer/guitarist Susan Tedeschi, a woman whose voice was born for the blues. Hearing Johnny and Derek Trucks rip it up on Dust My Broom is worth the price of admission alone, with Mike DiMeo’s tasty organ and piano consistently excellent throughout. Strangely the only bum note on the album for me is when Johnny teams up with brother Edgar Winter on Honky Tonk; Edgar’s saxophone sounds old-fashioned, even corny in places.

Musicians giving back to their mentors—what a concept! Now why can’t writers do that for each other?

I am a poet, journalist and author with a strong commitment to the environment and social justice. If anything, I have too many interests and too little time in a day to pursue them all. Film, poetry, literature, music, mythology, and history probably top the list. My musical interests lie firmly in rock and blues with a smattering of folk and world music. I consider myself lucky to have lived during the great flowering of modern rock music during its Golden Age in the late 1960s/early '70s. In poetry my major inspirations are Dylan Thomas, Rilke, Neruda and the early 20th century British/American poets: Auden, Eliot, Cummings. My preferred cinema includes the great French auteurs, Kirosawa, Orson Welles, and Film Noir. My preferred social causes are too numerous to mention but include banning GMOs, eliminating poverty (ha-ha), and a sane approach to forest conservation and resource extraction. Wish me—wish us all—luck on that one!
View all posts by seanarthurjoyce →
This entry was posted in Uncategorized and tagged music, rock, the blues. Bookmark the permalink.