Personal Experience with the Naming Day

Christopher McLachlan was four months old when his Naming Day ceremony was held in his parents’ garden on June 4, 2005. For both Anne and myself it was one of the most memorable moments of our lives. A bond was forged that day that has made us family and we’ve since become his honourary Uncle and Auntie. A close second to the Naming Day for me will be the memory of him at age 6, literally jumping with delight to see me: “Uncle Art! Uncle Art!”

The genesis of Christopher’s Naming Day developed fairly quickly, the initial spark coming about 10 years before his birth. “In 1994 I was traveling in Guatemala in a tiny village that had a bus that comes in once a day,” recalls Fiona. “There was a Canadian man who used to eat at a little restaurant there who invited me to his summer Solstice celebration back in Canada. It was something that had been held for over 40 years.” Fiona attended the ceremony for the first time that summer and has been attending ever since, eventually taking her husband Brian. “The celebration swung from the sublime to the ridiculous, but one of the most profound experiences was the baby naming ceremony,” she recalls.

The Solstice celebration included a theatrical piece and a dance where the evil was chased away from the baby, a practice common to many native naming ceremonies. “It was such a sacred thing; the first meeting of the child with its final lover, the earth,” says Fiona. “It was in the spirit of that that I wanted to celebrate our son. And I wanted to bring my community together.”

Some of us travel on foot and others in our minds. Fiona has always had an innate restlessness and curiosity about the world that puts her in the category of the former. Given her experience as a traveler, exploring India and much of South America on the rough side, an ecumenical ritual like the Naming Day is in character. So it’s not surprising she and Brian asked his father Jack McLachlan—a retired United Church minister—to officiate at the ceremony. Jack is a tall man with a kindly face, a keen sense of social justice, and a gentle manner. He was the ideal choice. His words were few but straight to the heart of the matter—bringing everyone quietly into the circle of honouring a new life being launched into the world. That circle is only complete when a child is made part of both the community and the Earth.

“It was special to bring him into the world with all those lovely people,” says Brian of the Naming Day. “It was just like a marriage.” 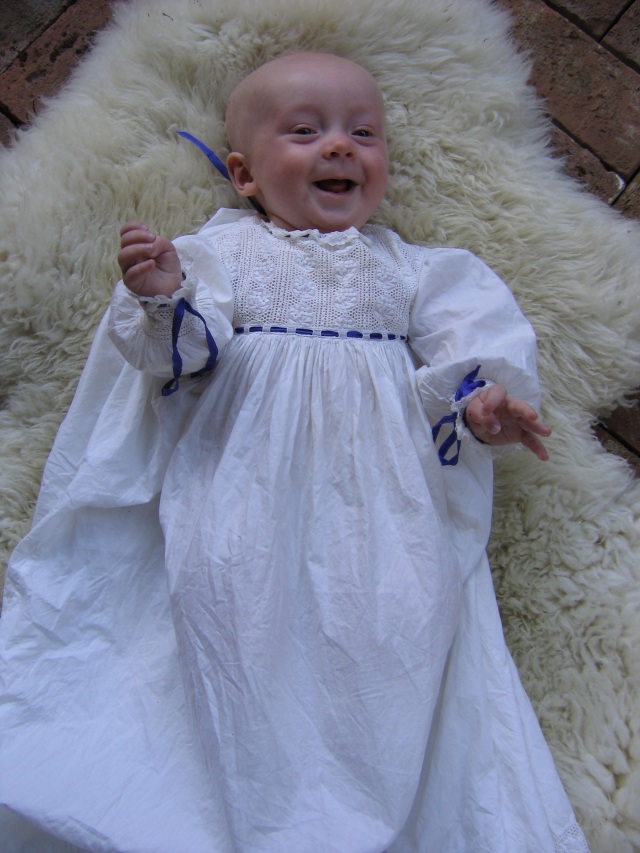 From Fiona’s mother Helen Brown came the baptismal gown Christopher wore on the Naming Day—the same one Fiona had worn as an infant, preserving a link in family history. And it provided a link to the family’s Anglican origins, subtly honouring it without bowing to the full weight of Christian tradition. Yet there were strong traces of aboriginal ritual, especially in the blessings. Brian and Fiona carried Christopher around the circle of gathered friends and grandparents. Each person was asked to offer a blessing or a poem, spoken to him and his parents. If possible they were to state how they would continue to support Christopher in the community as he grew. In a time of deeply fractured community, it was a moving gesture.

A shower of blessings for a new life: Christopher obviously gets what's going on.

What struck me so deeply that day was Christopher’s reaction. At four months old he seemed already an ‘old soul’ to me. He was absolutely alert the entire time, his great blue eyes wide, as if to make sure he didn’t miss a single word or gesture. Unlike some babies that age, he was able to look you straight in the eye. At a certain point in the ceremony, one-word blessings of the assembled people, written on coloured paper, were showered down on Christopher as he lay on a sheepskin. The moment was unforgettable—as the brightly coloured bits of paper floated down on him, a smile lit up his baby face and he laughed heartily.

“There’s such a place in ritual for the loving and grieving of humanity,” says Fiona. “I wanted to do that for Christopher, create a space where he could be lovingly held by the entire community.”

Brian and I had been friends since before he met Fiona, while I was writing my heritage column for the Nelson Daily News, probably during Nelson’s centennial year, 1997. We were both poring over files at the old Nelson Museum on Anderson Street—me for the raw material that would become my columns and Brian for historic images that would eventually become the Millennium mural he created on Hall Street downtown. Museum director Shawn Lamb introduced us and we struck up an instant but lasting friendship. I have never met a man who combines such warmth of spirit with so fine an intelligence, not to mention a sense of humour worthy of a stand-up comic. And like Christopher’s grandfather, Brian is a passionate advocate for social justice. In other words, he is endowed with all the qualities that make Christopher a great father.

Among his other gifts is the ability to memorize passages from great literature and poetry. When I read my poem The Naming Day at the ceremony, Brian and Fiona both later admitted to being mesmerized. As if to repay the favour, when Christopher was about three and a half, his father set him down on a worktable in his shop and said, “Christopher can recite William Blake’s Tyger, Tyger.” And that’s exactly what he did. I could hardly believe it. But then, with two such bright and gifted parents, I shouldn’t be surprised.

Brian, Christopher and Fiona help us with the apple harvest, New Denver, August 2009.

Today Christopher—or ‘Kip’ as we now call him—is a healthy, active seven-year-old who seems to have inherited his father’s ability to build things, as evident in an ongoing fascination with Lego. Both parents are great lovers of language and have seen to it that books, rather than the TV or computer screen, dominate Kip’s intellectual horizon. His favourite books these days are the Adventures of Tintin, which he often reads to us when we come to visit. Its stories subtly introduce kids to archaeology, history and politics, with a vocabulary that would challenge some adult readers. Kip attends the local Waldorf school, and enjoys its emphasis on learning through creativity.

Would we still be in Kip’s life without the Naming Day? Certainly. But for all my dislike of formal religious tradition, there’s something powerful in the act of a public ritual, particularly when it remains fresh and vital. In my view religious rituals should be made to undergo renovation on a regular basis, to clear out the cobwebs of dead habits that no longer evoke a sense of transcendence as they were originally intended to do. As T.S. Eliot reminds us again in Four Quartets: “…the past experience revived in the meaning / Is not the experience of one life only / But of many generations…”

I am a poet, journalist and author with a strong commitment to the environment and social justice. If anything, I have too many interests and too little time in a day to pursue them all. Film, poetry, literature, music, mythology, and history probably top the list. My musical interests lie firmly in rock and blues with a smattering of folk and world music. I consider myself lucky to have lived during the great flowering of modern rock music during its Golden Age in the late 1960s/early '70s. In poetry my major inspirations are Dylan Thomas, Rilke, Neruda and the early 20th century British/American poets: Auden, Eliot, Cummings. My preferred cinema includes the great French auteurs, Kirosawa, Orson Welles, and Film Noir. My preferred social causes are too numerous to mention but include banning GMOs, eliminating poverty (ha-ha), and a sane approach to forest conservation and resource extraction. Wish me—wish us all—luck on that one!
View all posts by seanarthurjoyce →
This entry was posted in Uncategorized and tagged civilization, community, family, social commentary. Bookmark the permalink.