Posted on September 11, 2012 by seanarthurjoyce

Now that September has arrived and the melancholy of another summer passed sets in, I thought I’d post something from my travels this August. Having recently returned from three weeks in Ontario, I was struck by the very different beauty of its landscape compared to British Columbia. 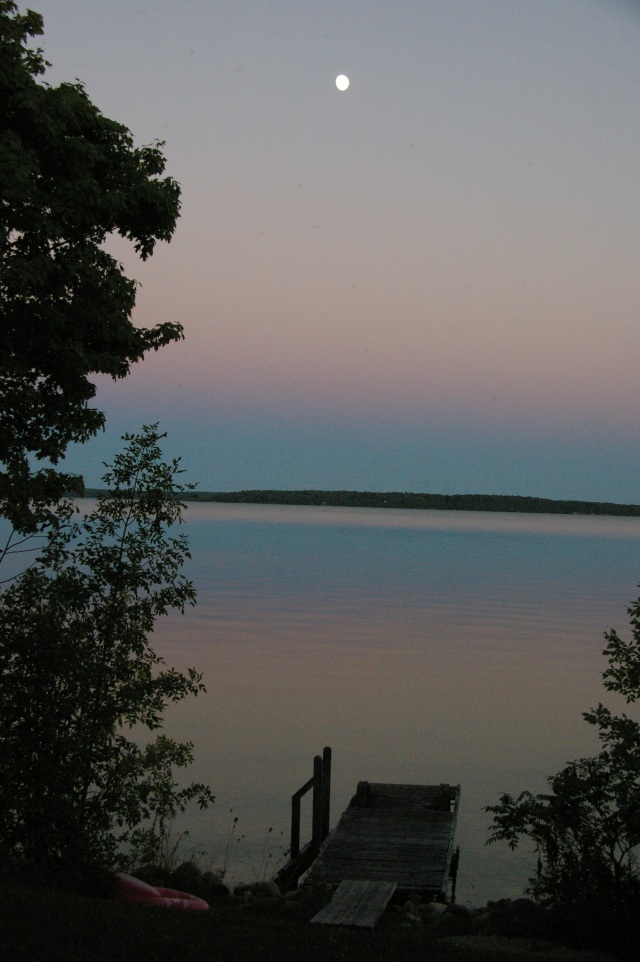 I will always be a ‘mountain man,’ but there are places in the Great Lakes region that can still take my breath away. The lovely green dales of the Cobourg region, with its classic 19th century farmhouses and civic buildings. The well-preserved Victorian red brick homes of Peterborough, and its system of locks on the Otonabe River. The sweeping skies over Lake Huron at Petrel Point, and the Lake’s soul-deepening sunsets over Southampton beach. 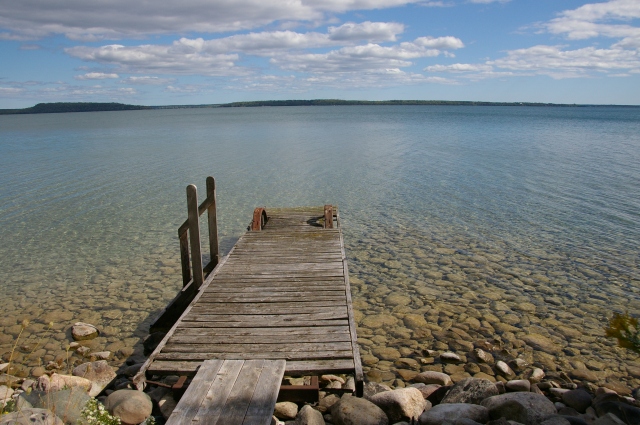 The view from the dock at Lake Mindemoya on a clear, calm day. Heaven. Photo ©2012 Sean Arthur Joyce

And then of course, there’s Manitoulin Island—the world’s largest freshwater island, complete with gorgeous freshwater lakes of its own. At Lake Mindemoya on a calm day you can see through the turquoise waters clear to the bottom—a shallow but immense body of water that is a magnet to bird and animal life. After a hectic travel schedule it was as if the horizon breathed a huge sigh of relief into me. I sat on the dock for hours just letting the scene soak into my pores.

These too are my family: our greeter at Lake Mindemoya. ©2012 Sean Arthur Joyce

And then this poem arrived. Hopefully it can convey something of the essence of this amazing place.

with ribbons of light

I ride the trees’

’til seated in the captain’s chair

Once, they trod the furrows

that mapped a horizon

to flurries of bruised pewter

curious, daring us to play.

head of ladybug, hauls up

on rock lapped by lake water.

I am a poet, journalist and author with a strong commitment to the environment and social justice. If anything, I have too many interests and too little time in a day to pursue them all. Film, poetry, literature, music, mythology, and history probably top the list. My musical interests lie firmly in rock and blues with a smattering of folk and world music. I consider myself lucky to have lived during the great flowering of modern rock music during its Golden Age in the late 1960s/early '70s. In poetry my major inspirations are Dylan Thomas, Rilke, Neruda and the early 20th century British/American poets: Auden, Eliot, Cummings. My preferred cinema includes the great French auteurs, Kirosawa, Orson Welles, and Film Noir. My preferred social causes are too numerous to mention but include banning GMOs, eliminating poverty (ha-ha), and a sane approach to forest conservation and resource extraction. Wish me—wish us all—luck on that one!
View all posts by seanarthurjoyce →
This entry was posted in Poetry and tagged environment, lake mindemoya, manitoulin island ontario, nature, outdoors, poetry. Bookmark the permalink.