The Book of Invasions Part 2

Posted on November 18, 2012 by seanarthurjoyce 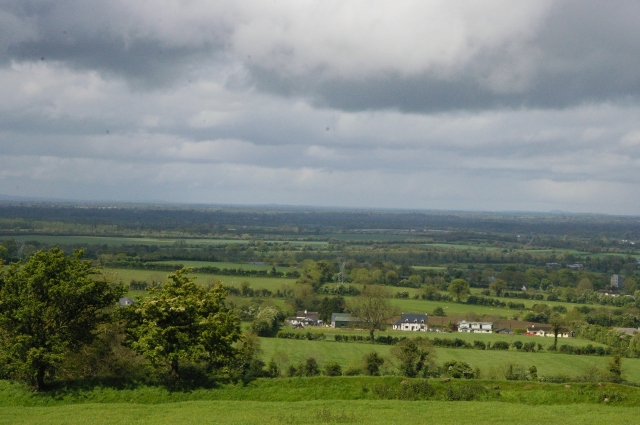 “On a clear day you can see forever…” The view from Tara Hill, seat of ancient Irish Kings: a landscape steeped in myth and legend. Photo Sean Arthur Joyce

When I visited Ireland for the first time in 2009, the Aha! moment was when I realized just how alive with myth, song and story the Irish landscape is. It woke me up to the fact that as a Canadian—or at least, as a Western Canadian—I had inhabited a blank landscape, a landscape devoid of story. Before I arrived, I had studied the stories of the first and second Battles of Moytura from the Lebor Gebala Erenn and knew there were certain places on the landscape of County Sligo I had to see. I had to see the Lake of Balor’s Eye, the Heapstown cairn that had filled up the magical healing well of the Dedannans, the ‘burial mound’ of the Morrigan at Carrowkeel overlooking Lough Arrow. Our tour guide John Willmott of Celtic Ways tours is himself an avid student of Irish mythology and has made a business of taking visitors to these out-of-the-way places.

At the entrance to the passage ‘tomb’ or cairn on Carrowkeel ridge, County Sligo. Where myth and reality collide. Photo Sean Arthur Joyce

Crawling with John through the narrow passageway of the passage ‘tombs’ on Carrowkeel, I could look out across the valley through the aperture built to focus the sun at summer solstice. The cairns on that ridge are at least 3,000 years old. Despite prevailing archaeological opinion, these hardly seem like ‘tombs’ to me. For one thing, human remains are seldom found in Irish passage ‘tombs.’ As my fellow traveller Anne Champagne pointed out, these cairns seem to suggest some form of matriarchal culture. They are built to emulate the female genital system—the long passage of the vagina and the womb-like central chamber with its two ovary-like antechambers on either side. Then what happens? The male ‘sun god’ appears at the right equinoctial moment to spill his ‘seed’ down the passage and into the central chamber. The cairns’ builders clearly had a deep connection with Nature, expressed both in these lasting monuments and creatively in their mythologies.

The view toward Lough Arrow from Carrowkeel ridge, where the ancient passage cairns lie, dating roughly to 3,000 years ago. Photo Sean Arthur Joyce

Creeveykeel court ‘tomb’ near Ben Bulben ridge, Sligo County. These were similar to the passage cairns except they would have been covered in earth or sod. Photo Sean Arthur Joyce

That was Anne’s inspired epiphany. But my epiphany was this: the Irish landscape is alive with myth. Every field, every lake, stream, holy well has a story or a song. You can actually visit the places in Ireland named in the myths and folktales. Suddenly what Joseph Campbell called ‘the power of myth’ becomes very real and immediate. It’s no wonder the Irish have seen themselves, their identity as a people, as entwined with the landscape of Ireland. Of course that ‘Irish’ identity is made up of all the invading and conquered peoples of the Book of Invasions. So in that sense, what is ‘Irish’? Certainly no one there can point to an ‘aboriginal Irishman.’ Even today’s ‘native Irish’ are made up of the accretions of history and mythology, intertwined as deeply and subtly as a Celtic knot. We in Canada may still be too young in our national identity to have quite attained this state. Give it another thousand years or so. But by then, we may be well along the way to a global culture, a global mythology. Even 25 years ago, Campbell was looking ahead to the environmental crises we now face when he said, “The only mythology that is valid today is the mythology of the planet, and we don’t have such a mythology.” 6

Well, if a planetary mythology can root us to the Earth before we manage to ruin it, then bring it on. Meanwhile, we can learn a lot from mythology about intimate spiritual connection with landscape. But will we, before it’s too late?

Today’s corporate raiders are just as ruthless as the marauding armies of past centuries, leaving a swath of destruction and homelessness in their wake.

While the invading hordes of the past waved swords and spears, now in this era of the ‘kinder, gentler’ psychopath they use ‘free trade’ agreements and other questionably legal niceties. The results are largely the same: suffering or deprivation for the majority, fantastic riches for the One Percent. Arguably, the old-fashioned rape and pillage was more humane: one stab of a sword and it was all over. For the thousands of people now losing their homes in the wake of the American mortgage crisis, it’s a slow death by attrition, the death that kills the spirit long before the body dies. The more things changed over the past 10,000 years, the more they stayed the same. Whatever your view of our social evolution, most would agree on one point: the stakes have never been higher.

And we are certainly experiencing a boom of social activism. Paul Hawken, in his book Blessed Unrest, estimates there are up to two million organizations working toward ecological sustainability and social justice. This, he argues, is “the largest social movement in all of human history.” Hawken goes so far as to say that “everyone on earth will be an environmentalist in the not too distant future, driven there by necessity and experience.” 7 The steady escalation of intensity in storms like 2012’s Hurricane Sandy make this obvious.

As Bill McKibben writes in the July 19, 2012 Rolling Stone, “June broke or tied 3,215 high-temperature records across the United States. That followed the warmest May on record for the Northern Hemisphere – the 327th consecutive month in which the temperature of the entire globe exceeded the 20th century average…” 8 In British Columbia, freak landslides at Sicamous in June and Johnson’s Landing in July are now being considered as possible indicators of global climate change. While the Shuswap Lake community of Sicamous suffered serious property damage to homes, vehicles and a marina, four people lost their lives in Johnson’s Landing. Global climate change is no longer something that happens to some country far away.

Residents of island nations stand to lose the very ground beneath their feet as rising sea levels gradually make their countries disappear. With another ice shelf fracturing and slipping into the ocean seemingly every week—the latest being the Petermann Glacier in the Arctic reported in July—this becomes an increasingly urgent scenario for these nations. As Hawken suggests, suddenly environmental activism will shift from being the prerogative of the Western middle class to a survival strategy for the displaced. Only now the ominous tide of invasion comes not in the shape of Viking longships but in a literal rising tide of water. And retreating behind the palisades of the hill fort for protection is no longer an option.

Where polar bears go, we and many other species will follow. Change is no longer an option, but a necessity.

Hawken avoids the fatalism that many burnt-out activists succumb to, using the metaphor of a planetary immune system to describe the huge rise in social activism over the past century. “The hundreds of thousands of organizations that make up the movement are social antibodies attaching themselves to the pathologies of power,” he explains. 9 But McKibben, founder of 350.org, is somewhat more sanguine. Decades of environmental activism have done little to stop us short of the brink of disaster. As McKibben explains, in a capitalist economy, money talks and those with the money set the agenda. “Left to our own devices, citizens might decide to regulate carbon and stop short of the brink; according to a recent poll, nearly two-thirds of Americans would back an international agreement that cut carbon emissions 90 percent by 2050. But we aren’t left to our own devices. The Koch brothers, for instance, have a combined wealth of $50 billion, meaning they trail only Bill Gates on the list of richest Americans. They’ve made most of their money in hydrocarbons, they know any system to regulate carbon would cut those profits, and they reportedly plan to lavish as much as $200 million on this year’s (US) elections.” Care to guess which presidential candidate the Koch brothers are probably backing? An article in The Guardian in June on the eve of the Rio+20 Earth Summit noted that of the “500 internationally recognized agreements in the past 50 years” related to the environment, there has been “some” progress made on only 40. 10

“Sustainability is about stabilizing the currently disruptive relationship between earth’s two most complex systems―human culture and the living world,” Hawken explains. 11 But the problem is not one of people lacking motivation, as Blessed Unrest makes clear. HG Wells summed it up: “History is a race between education and catastrophe.” Like the self-limiting diseases that sweep through animal populations that overrun their ecosystem, our auto-destruct button seems to have been there from the beginning. Or at very least since we first began banding together to form civilizations 10,000 years ago in the Mesopotamian delta. Hence the expression: Where civilizations go, deserts follow.

Next time: How do we maintain our connection to the planet? And can that prevent us from pushing the environment over the brink?

I am a poet, journalist and author with a strong commitment to the environment and social justice. If anything, I have too many interests and too little time in a day to pursue them all. Film, poetry, literature, music, mythology, and history probably top the list. My musical interests lie firmly in rock and blues with a smattering of folk and world music. I consider myself lucky to have lived during the great flowering of modern rock music during its Golden Age in the late 1960s/early '70s. In poetry my major inspirations are Dylan Thomas, Rilke, Neruda and the early 20th century British/American poets: Auden, Eliot, Cummings. My preferred cinema includes the great French auteurs, Kirosawa, Orson Welles, and Film Noir. My preferred social causes are too numerous to mention but include banning GMOs, eliminating poverty (ha-ha), and a sane approach to forest conservation and resource extraction. Wish me—wish us all—luck on that one!
View all posts by seanarthurjoyce →
This entry was posted in Activism, environment, mythology and tagged activism, civilization, history, news, social commentary. Bookmark the permalink.