Posted on December 7, 2012 by seanarthurjoyce

There is a medicine story that tells of Crow’s fascination with his own shadow. He kept looking at it, scratching it, pecking at it, until his shadow woke up and became alive. Then Crow’s shadow ate him. Crow is Dead Crow now. —Jamie Sams & David Carson, Medicine Cards (Santa Fe, NM; Bear & Co., 1988)

“The poems are well turned, with memorable lines that articulate the shadow side of the human predicament, Crow as the Grim Reaper’s clean-up squad, customer at the Roadkill Cafe with a B.A. in philosophy, a sort of lower-case Satan-cum-Nietzsche on a rant. …These elements remind me that I’m in the hands of someone who can use the language, summon up all sorts of vocabularies at the drop of a feather.” —Comment on Dead Crow and the Spirit Engine

Who is Dead Crow? And why do I want to know? He’s a watcher, a player, a cynic with a bad case of existential angst.

Crows and humans have been linked in social evolution for thousands of years. Their influence shows up everywhere in mythology.

Today I give readers a sneak peek at one of the manuscripts I’ve been working on since 2009, Dead Crow & the Spirit Engine. The genesis of the idea for the Dead Crow character came from the quote from Medicine Cards, but I’d been interested in Crow mythology since the early 1990s. As a character the generic Crow first appeared in a cameo role in a limited edition collection titled The Shattered Icons (Chameleon Fire Editions, 1994). Then a long gap opens up until Crow appears again in The Charlatans of Paradise (New Orphic Publishers, 2005) when he spontaneously appears the creation mythology of the poems birth of crow and afterbirth.

Having studied mythology from various cultures I found myself wanting to create a character who was equal parts West Coast First Nations Raven (Creator and Keeper of Secrets), Celtic Morrigan (Changeling and Crow Goddess of Battlefields) and a film noir antihero with a laconic drawl. How did such a powerful creature end up on Earth, of all places? The Prologue gives the back story of Dead Crow interspersed with a kind of incantation in the short verses. Incantation is an ancient device used by storytellers to lull their listeners into the story. Only in this case the story is less a linear than an existential narrative. Dead Crow is ancient and has the long view of history, which poses some interesting philosophical issues, for him and for us.

The poems are written based on the Celtic triad. The Celts used three as the basis of their numeric system, so 3, 6, 9, 12 etc. As it happened I ended up writing 18 poems, or 6 sets of 3. I liked the symmetry of it. Originally there had been two stories as well but after consultation with better fiction writers than myself I decided to abandon them. Elements of plot that form the basis of Dead Crow’s motivation were recast in verse form for the Prologue. In all but the Prologue the poems remain consistently within a three-line verse structure. This tied back into the Celtic numeric system nicely.

The quote above was written by Canadian poet and teacher Gary Geddes.  I was fortunate enough to take a workshop with Gary at Nelson’s Oxygen Art Centre in the fall of 2011. I submitted a selection from Dead Crow and the Spirit Engine and he seemed immediately taken with them. “This is a terrific piece, full of surprise after surprise in terms of language and perception, ranging from the vocabulary of the Classics to down-home diction,” he wrote in his initial critique of the poem Dead Crow: Arrival. “Empires is equally engaging, pulling me back even more to (Ted) Hughes’ Crow and (Robert) Kroetsch’s Raven trickster poems. … Your crow seems to me the voice of a more apocalyptic time, prepared to take on larger issues that Hughes or Kroetsch’s raven poems and What the Crow Said took on, and doing it equally well.” In further ‘workshopping’ he offered suggestions for refining the poems.

The late Ted Hughes. His 1971 collection Crow is a hard act to follow.

This was high praise, as I display Hughes’ book prominently on my bookshelf and have always marveled at the dark ferocity and gemlike brilliance of those poems. What the Crow Said impressed me far less—I found myself wishing Kroetsch had written it as a sequence of linked poems instead. The novel seemed to stumble all over the landscape. But most editors at literary magazines didn’t get Dead Crow. Some even suggested that the mere fact of Hughes and Kroetsch having already written definitive pieces on the Crow mythology meant that nothing more needed to be said on the theme. Either that or they resented my audacity for trying. So far only Kootenay editors have published some of the poems, which says something very interesting about where we live. 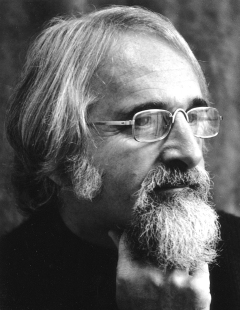 It’s deeply moving to me to have the confidence of someone like Gary Geddes. His compendium 20th Century Poetry and Poetics was the textbook I cut my teeth on as a young poet. When it was first published in the early ’70s it too was possessed of a certain audacity: at a time when ‘world-class’ poetry meant American, British or European, Geddes placed contemporary Canadian poets right next to them in the pantheon. Generations of writing students were introduced to Margaret Atwood, Earle Birney, Leonard Cohen, Al Purdy, A.M. Klein, bp nichol and Margaret Avison (in my battered 1973 edition) in the same context of greatness as Yeats, Robert Frost, Dylan Thomas, Theodore Roethke, Ted Hughes, et al. At the time it was a revolutionary act. Geddes sweetened the deal by including essays on poetics by many of the poets in the anthology. I probably learned as much from that single volume as from everything on poetics I’ve studied since.

Aside from sharing Geddes’ interest in the role of poetry as an advocate of social justice, I appreciate his desire to place poetry within its historical context. Geddes has argued that the short lyric poem has had its grand day—it’s time for the time-honoured long poem form to come back into common use. “After awhile the mature poet longs for a larger canvas, for which he needn’t have recourse to prose or drama. This ought to come as a breath of fresh air to poets and readers who feel that poetry has become too minimal, or that critics are waxing more and more eloquent about less and less.” (Out of the Ordinary: Politics, Poetry and Narrative, Kalamalka Press, 2009) Cinematic storytelling now takes the place in popular culture that was once held by the epic narrative poem. So long poems can now branch out, delve deeply, move in a more elliptical fashion. Poetry, Geddes points out, its “existence in the life of our society,” depends on “its ability to absorb and assimilate new materials (linguistic and otherwise), to take upon itself the widest possible range of information, idea, event, theme.” 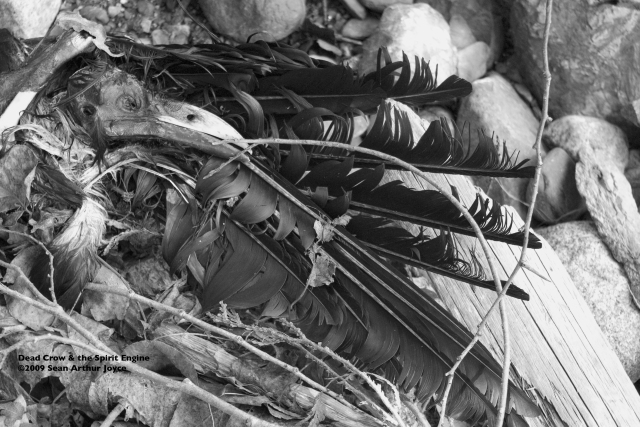 Dead Crow is very much alive and watching you. Photo ©2009 Sean Arthur Joyce

That has been my goal with Dead Crow. If you want a narrative with a clearly delineated, linear plotline, go find yourself a good novel. If however you’re interested in delving deep into the shadows of consciousness and the contradictions of existence in a corporeal world, then these poems are for you. If like me you find history endlessly fascinating, always seeking the long view of social evolution, then Dead Crow and the Spirit Engine is for you. If you sometimes feel jaded about your own species yet remain inexplicably devoted to seeking transcendence in the chaos, you’ll love the character of Dead Crow—a loner, a watcher, a changeling with a bad attitude.

I never wanted this assignment.

Yet here I am—God of Shadows,

Outsider of all outsiders,

Next: Dead Crow and the Spirit Engine: Prologue

I am a poet, journalist and author with a strong commitment to the environment and social justice. If anything, I have too many interests and too little time in a day to pursue them all. Film, poetry, literature, music, mythology, and history probably top the list. My musical interests lie firmly in rock and blues with a smattering of folk and world music. I consider myself lucky to have lived during the great flowering of modern rock music during its Golden Age in the late 1960s/early '70s. In poetry my major inspirations are Dylan Thomas, Rilke, Neruda and the early 20th century British/American poets: Auden, Eliot, Cummings. My preferred cinema includes the great French auteurs, Kirosawa, Orson Welles, and Film Noir. My preferred social causes are too numerous to mention but include banning GMOs, eliminating poverty (ha-ha), and a sane approach to forest conservation and resource extraction. Wish me—wish us all—luck on that one!
View all posts by seanarthurjoyce →
This entry was posted in Poetry and tagged civilization, creativity, poetry, social commentary. Bookmark the permalink.