Part 1: Hope & Compassion in an Age of Decline

NOTE: I wrote this essay as a gift to this year’s high school graduating class at Lucerne Secondary School in New Denver, BC, although it could apply to almost any graduating class. This K-12 school has repeatedly been noted for its innovative programs, such as Spring Into Learning, where kids get to go out camping and canoeing on gorgeous Slocan Lake and learn about their native environment. With food security issues becoming more and more a concern, the school also partnered with the community to create a greenhouse so kids can learn about growing food. The Lucerne Writers Festival brings in noted authors to teach students about writing and English teacher Terry Taylor’s classes have included field trips to writers’ festivals. The school has a very active Parent Advisory Council that informs its curriculum, reflecting community values. The result is graduating students who have a broad base of knowledge grounded in both community and the environment. I predict that some of these brilliant students, like this year’s class of five young women, will become our future leaders in the coming times of crisis.

“It is odd that the orthodox, while decrying free thought in their own day, are quite willing to admit a host of truths which would never have become known but for the freethinkers of earlier ages. …Every intellectual advance, and a great many moral reforms, have had to fight for victory against the forces of obscurantism. …Progress, now as in the past, is only possible in the teeth of bitter hostility.”

To you young graduates I have both congratulations and ‘tough love’ to offer. We have long since passed the time for nice, polite words, for evasive, Pollyanna language. The signs are all around us and we need to stop kidding ourselves that it will all go away if we just wish hard enough or wait for the right conjunction of planets. As I write in my poem Hope: “Banish hope / from your lexicon. / Say instead: Action / or no action.”

If the test of a ‘civilized’ society is how we treat the most vulnerable, then we have failed.

The deafening silence of the crash of civilization is everywhere. But if you’re any kind of an engaged citizen you already know this. I don’t need to add any more to the litany of despair. And if you’re a young person just graduating into the world of work you know it better than anyone. It’s your future that’s at stake. Not only yours, but all generations to come. We are truly all in this together. The myth of the ‘rugged individualist’ so carefully cultivated by Western society is crumbling at the seams, battered by the forces we’ve unleashed. Even if you live in a gated community with specially reinforced walls around you, you can’t escape. Whether it’s the infiltration into our diets of genetically modified foods, the seeping poison of chemical residues or the electromagnetic pollution of wireless devices—rich or poor we’re all affected.

What are we handing off to our graduating students? Photo courtesy Nadine Raynolds

I must confess to a deep feeling of guilt over what we’re passing on to your generation. Not because I participated in the destruction of rainforests, or grabbed every new gas-guzzling toy, or sold fraudulent stocks. To the contrary, I’ve always fought against these forces in any way I can—using my writing talents as a reporter for one of Western Canada’s last independently-owned newspapers, the Valley Voice, posting essays and poems on my blog chameleonfire1, writing and performing poems that advocate for social justice, signing petitions, attending peace marches, etc. But as I say in Hope, “We are all implicated / in the tragic fall, / by action or inaction.” What do I mean by that? Am I throwing up my hands in defeat? Well frankly, on a bad day, yes. But that’s not the point. Please bear with me.

In the poem I juxtapose societal apathy so that it cuts both ways. For example, in the third verse, I write:

but the next day at coffee

This is not an admission of defeat but a frank acknowledgement of an all too human trait—a trait we all share to varying degrees depending on the situation. If we’re to make progress as a species we must first be honest about our failings. Otherwise we live under an obfuscating cloud of denial that gets us nowhere. But then in the final stanza of the poem, I write:

we will meet again

This is the flipside of the earlier verse—that no matter how bad the storm, we humans somehow manage to survive, to brush away the rubble and carry on, to rebuild. Always in my poetry I strive for balance, a clear-eyed appraisal of both positive and negative forces. I believe it’s a quality we’re going to need more and more as time goes on. Only writing about what’s positive can lead to a fatal blind spot, just as only writing about the negative.

For civilization, the party’s over. Time to get to work.

But what about those of us who are activists, who have fought hard for years, even decades—often, it seems, to no avail? This is a much tougher question. And often it seems our opponents—those who would put profit above all human and environmental values—have learned from their mistakes while we haven’t. While the Left has continued to roll out ineffectual peace marches and petitions and the tired mantra of social progress: ‘education, education, education,’ the Right has been busy. It has funded ‘think tanks’ to study the psycho-linguistic levers of manipulation that keep the populace duped and enslaved. By claiming the moral high ground of refusing to ‘stoop to such tactics,’ the Left has made itself irrelevant. Educating people for social justice only seems to work for a small fraction of the populace. (If you want to learn how it all works, then read the short but potent handbook, Don’t Think of An Elephant by linguistics professor George Lakoff.) Journalist Chris Hedges minces no words about what he calls the ‘phantom Left’ in the US:

“If the liberal class concedes that power has been wrested from us it will be forced, if it wants to act, to build movements outside the political system. (Italics mine.) This would require the liberal class to demand acts of resistance, including civil disobedience, to attempt to salvage what is left of our anemic democratic state. But this type of political activity, as costly as it is difficult, is too unpalatable to a bankrupt liberal establishment that has sold its soul to corporate interests.” —Truthdig, Nov. 1, 2010 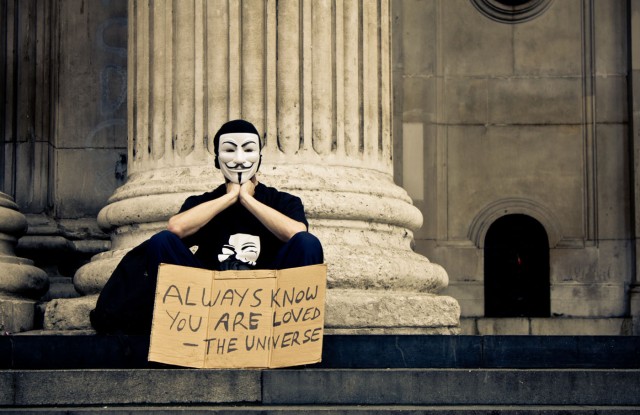 Occupy Love, Velcrow Ripper’s third documentary in his Fierce Love Trilogy, examines the possibilities for our future. Used by permission.

Even in the successes of the ‘Arab Spring’ there’s room for caution. As Naomi Klein points out in Velcrow Ripper’s new film, Occupy Love, the Egyptians have succeeded in ousting a dictator. But will they succeed in eliminating the forces of neoliberalism, the global capitalist hegemony that has been responsible for so much environmental and social destruction? Once the euphoria of revolution wears off, the hard work of rebuilding comes. It won’t do to try to patch up a system that is flawed at its roots. As Hedges says, social systems need to be built that are entirely new and separate from the status quo. My beloved partner Anne Champagne is fond of citing the example of Woman Church, which was founded when a group of Christian women got fed up with waiting for the patriarchy to allow them to be ordained as ministers. Instead they established their own, entirely separate or ‘parallel’ organization.

The Occupy movement was a big wake-up call and a missed opportunity. Photo by Sasha Kimel

The fatal flaw of capitalism is its relentless capacity to turn everything—even air and water—into a commodity for sale. The net effect of this is the greed-driven ‘race to the bottom’ we’re now seeing playing out. When everything is for sale, nothing has any real value. It reaches absurd proportions, as for example in the computer industry, where software is barely released before it’s already obsolete. Why? Because the industry is organized to reward, i.e. monetize, constant novelty, constant ‘newness’ at the expense of quality. Often the ‘innovation’ this creates amounts to very little actual improvement beyond more selling points. There’s no incentive in this type of capitalism to make anything last, whether it’s a type of software or a running shoe. Yet the mountains of waste this creates works directly against sustainability.

The same has happened with post-secondary education. Although universities were historically the domain of society’s elite, for a brief period in the 20th century they became affordable even to the working class. University became the place, not to indoctrinate future rulers in maintaining the status quo, but to teach critical thinking skills. The Right realized the danger of such an approach with the social revolutions that were generated in the 1960s—civil rights, women’s rights, gay rights, the environmental movement, etc. It’s always dangerous to teach people how to think. I’m convinced this is one of the major reasons why students now must mortgage their lives to get a university education. It’s a reversion to the historical situation that kept all but the wealthiest families from gaining access to higher education and therefore, to social and political power. Chris Hedges again:

“We’ve bought into the idea that education is about training and ‘success,’ defined monetarily, rather than learning to think critically and to challenge. We should not forget that the true purpose of education is to make minds, not careers. (Italics mine.) A culture that does not grasp the vital interplay between morality and power, which mistakes management techniques for wisdom, which fails to understand that the measure of a civilization is its compassion, not its speed or ability to consume, condemns itself to death.” — Empire of Illusion: The End of Literacy and the Triumph of Spectacle

I am a poet, journalist and author with a strong commitment to the environment and social justice. If anything, I have too many interests and too little time in a day to pursue them all. Film, poetry, literature, music, mythology, and history probably top the list. My musical interests lie firmly in rock and blues with a smattering of folk and world music. I consider myself lucky to have lived during the great flowering of modern rock music during its Golden Age in the late 1960s/early '70s. In poetry my major inspirations are Dylan Thomas, Rilke, Neruda and the early 20th century British/American poets: Auden, Eliot, Cummings. My preferred cinema includes the great French auteurs, Kirosawa, Orson Welles, and Film Noir. My preferred social causes are too numerous to mention but include banning GMOs, eliminating poverty (ha-ha), and a sane approach to forest conservation and resource extraction. Wish me—wish us all—luck on that one!
View all posts by seanarthurjoyce →
This entry was posted in Activism, Civilization, social commentary and tagged activism, civilization, community, empathy, environment, social commentary. Bookmark the permalink.

1 Response to A Deafening Silence Pt.1