Posted on August 14, 2013 by seanarthurjoyce

When the going gets tough, the tough get going, as the saying goes. Slocan Valley residents affected by the jet fuel spill in Lemon Creek gathered at the Vallican Whole the evening of August 12 to brainstorm ways of responding to the disaster. Dubbed the Slocan Solutions forum by organizers Shauna Teare of the Valley Permaculture Guild and Malin Christensen, the mediated world café format helped channel heated emotions into clear-headed solutions.

• The Slocan River Streamkeepers table was hosted by local permaculture expert Gregoire Lamoreaux, who said the group has been on the river collecting samples since the water ban was lifted by Interior Health. Lamoreaux said the north side of Lemon Creek – which had been ignored until recently – is now also being cleaned up, thanks to pressure from residents. Concerns mentioned were that flushing is an ‘old tech’ approach to remediation that only drives the pollution deeper. “It is removing some of it so it’s not all bad,” says Lamoreaux. “They’re just following the books, not nature.”

• The Farming table was hosted by Judy Morten, president of Kootenay Organic Growers (KOGS), who put pressure on SNC Lavalin to take samples from commercial organic farms in the valley. The results are in on soil samples from five farms; four were clean and one had evidence of contaminants well within acceptable limits. Tissue samples of kale leaves are still being tested. Morten said householders wanting to collect tissue samples should take it from new growth on plants. She’d like to see local fire halls supplied with containment equipment and more emergency response training for local first responders to avoid the mistakes made this time. “I know people are suspicious of these authorities but everybody I’ve dealt with has been lovely and concerned.”

• Colleen Emery of Emery Herbals hosted the Health table, and noted that there’s a need for ongoing mental health care in the wake of the disaster. Children tend to have a delayed reaction to trauma, she said, so counselling will be needed as they head back to school this fall. She advises residents to carefully document all health impacts and report them to their doctors.

• The Emergency Social Services table hosted by naturopath Jessie Speirs reported that a better job needed to be done of evacuation as some people were missed. A local emergency services group or phone tree with local authorities such as Area H Director Walter Popoff needs to be established for more thorough response. There’s also a need to better coordinate animal and livestock evacuation. Everyone should have a landline phone for emergencies, and fire halls used as community hubs. 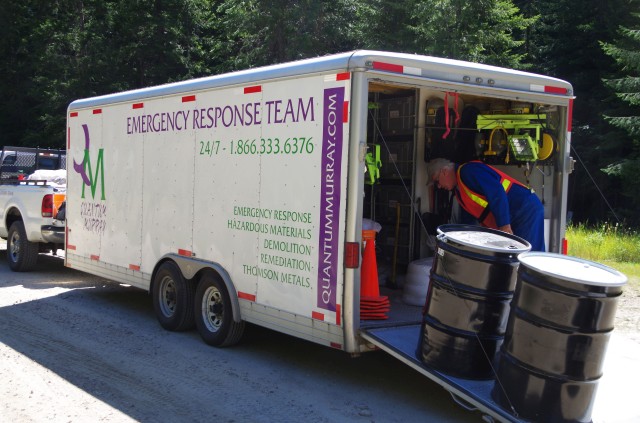 Many residents are concerned that remediation efforts will end too soon. Photo Sean Arthur Joyce

• Richard Johnson of the Slocan Solutions Society hosted the Fish and Wildlife table, noting that there’s a need to coordinate testing and collection of data. Water samples, if not properly collected, can end up being useless. Johnson was alarmed to hear that some fish caught in Slocan Lake have fuel odours, highlighting the need to monitor the entire watershed. What effect will peat moss have on pH of water? What will be the long-term effect on wildlife?

• Nelle Maxey, who was hired by the regional district to manage the Recovery Centre, spoke on Water Use. She reflected many residents’ concerns that Interior Health lifted the water ban too soon. Maxey advised contacting media, friends and neighbours to tell them the water is not safe yet. Get independent water testing for your wells. Long-term monitoring needs to be done for air, water and soil. More pressure on provincial authorities may be needed to ensure that all test results are made available to the public. 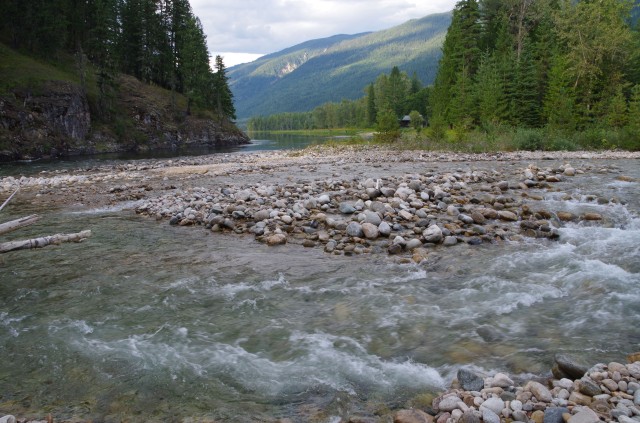 • Hosting the Media table was John Wittmayer, who reported that he was recently interviewed by CBC Radio’s Daybreak program. Like residents, they want to know what ongoing remediation plans will be in place. Wittmayer is concerned that most of the information dispensed so far has come from corporate or government sources. He urged as much reporting as possible of peoples’ personal stories as a means of humanizing the disaster – both on local and national media. He hopes to organize a Clean Your River volunteer day that could be broadcast for maximum effect.

• The Sinixt Nation table reported that if they had been contacted first by government agencies instead of several other non-resident First Nations, they could have guided them to the site within the hour. They urged supporters to let government know that they need official status so this won’t happen again.

• Other issues addressed included shoreline monitoring, which will need volunteers on an ongoing basis. Observers locating fuel deposits need to flag both access points and the sites; flagging tape is available at the Recovery Centre in Winlaw. Dead fish or wildlife collected should be bagged, dated and frozen until delivered to a Conservation Officer for testing.

• A local man employed by Quantum Murray said the day the water ban was lifted the whole clean-up operation was scaled down and his bosses were not happy about it. The Minister of Environment needs to be held accountable.

• One of the most obvious needs seems to be a central community portal or website for information sharing. Those with evidence of fuel such as photos or samples are urged to contact the Slocan Valley Emergency Response Facebook page at https://www.facebook.com/pages/Slocan-Valley-Emergency-Response/407812662661033 or email: info@lemoncreekresponse.ca.

I am a poet, journalist and author with a strong commitment to the environment and social justice. If anything, I have too many interests and too little time in a day to pursue them all. Film, poetry, literature, music, mythology, and history probably top the list. My musical interests lie firmly in rock and blues with a smattering of folk and world music. I consider myself lucky to have lived during the great flowering of modern rock music during its Golden Age in the late 1960s/early '70s. In poetry my major inspirations are Dylan Thomas, Rilke, Neruda and the early 20th century British/American poets: Auden, Eliot, Cummings. My preferred cinema includes the great French auteurs, Kirosawa, Orson Welles, and Film Noir. My preferred social causes are too numerous to mention but include banning GMOs, eliminating poverty (ha-ha), and a sane approach to forest conservation and resource extraction. Wish me—wish us all—luck on that one!
View all posts by seanarthurjoyce →
This entry was posted in environment, News, The Kootenays and tagged community, environment, nature, news, public health, the kootenays. Bookmark the permalink.