Posted on October 28, 2013 by seanarthurjoyce

Despite the deafening silence that has fallen over the Slocan River and Lemon Creek since the Quantum Murray remediation teams left, residents continue to find ample evidence of jet fuel. Lemon Creek resident Jon Burden, profiled in an earlier blog post, is on intimate terms with his watershed. He walks it almost daily, checking for remnants of the A1 jet fuel spilled by Executive Flight Centre on July 26.

Yet the political, legal and insurance elements of society have exerted a dangerous influence over spills such as these, emphasizing the need to escape liability rather than protecting either people or the environment. In my previous blog post, Lemon Creek Monitoring Plan: The Politics of Self-Regulation, I explained how the privatization of environmental monitoring has largely removed the transparency of data available to the public.

Canada is now officially a Third World country in regulatory terms. My research so far into the Transport of Dangerous Goods Act has revealed a convoluted maze of amendments and repeals that is almost impossible for the layperson to understand. But Bruce Campbell, of the Canadian Centre for Policy Alternatives (CCPA), in the October issue of the CCPA Monitor, sums it up well: “Over the last 25 years, Transport Canada has devolved the responsibility for, and management of, safety rules to the companies themselves (self-regulation), with Transport Canada approving the rules that the companies put in place and monitoring companies’ self-regulation systems.” This and other deregulation made inevitable tragedies like Lac Mégantic and the Maple Leaf tainted meat scandal.

In other words, companies transporting dangerous goods such as A1 jet fuel now write their own safety plan, their own recovery plan for spills, write their own self-monitoring reports and merely have to submit them to the Minister of Transportation.

Even the detailed long-term monitoring plan compiled by SNC Lavalin is no guarantee residents will see justice. Leaving aside this corporation’s reputation as one of the most corrupt companies on Earth, we are already seeing indications that the monitoring plan could be highly selective. The release of data could end up being just as selective. Yes, the Ministry of Environment has said it will post SNC Lavalin’s data on the MoE website. But as Microbiologist Jennifer Yeow of Slocan Valley Streamkeepers explains, “it’s all about the metrics.” In other words, depending on how you test the samples, you can massage the results.

Yeow has already been told by Cory Bettles, SNC Lavalin’s lead biologist for the monitoring plan, that her test results are irrelevant. “He’s questioning our results. We’re seeing evidence of hydrocarbons in the water through the end of September and he’s inferring it’s not an issue. He explains it in a technical manner, but that’s the essence of it. If the manager at SNC Lavalin says it’s not going to affect algal growth, then it won’t be looked at.”

Dedicated residents like Jon Burden, acting out of concern for the health of his family and his local environment, are seeing physical evidence of jet fuel almost daily. In an email sent to me by Jon on October 27, he brings us up to date: “It rained a bit last night so I thought I’d venture down to the mouth of Lemon where you and I went the last time you were down this way.

“That area where we turned over rocks, just down from the confluence on the Slocan—below where the booms were, has a lot more rocks exposed now that the water has gone down. The level has dropped considerably since the last time you were here. I turned over a few rocks, like we did last time. Only this time, almost every rock I turned over brought up fuel sheen.  Most of this area was underwater last time you were here. Now that it is exposed you can see the fuel that was trapped there. That little pond that is just to the east of the shoreline has fuel sheen floating around on the top of it.

“The odor that was emitted from the overturned rocks was quite powerful. I walked back up Lemon to just below the train trestle and turned over rocks and the same thing happened. This is three months after the spill and there is still so much of the stuff under the rocks and in the gravel. (italics mine)

“One of the things that is concerning is the Biocide that they add to the Jet fuel. This kills bacteria and fungi that can contaminate the fuel and plug fuel filters and accelerate metal corrosion etc. If you read up on this stuff you will find out that it is toxic to aquatic organisms and causes long-term adverse effects in the aquatic environment.” 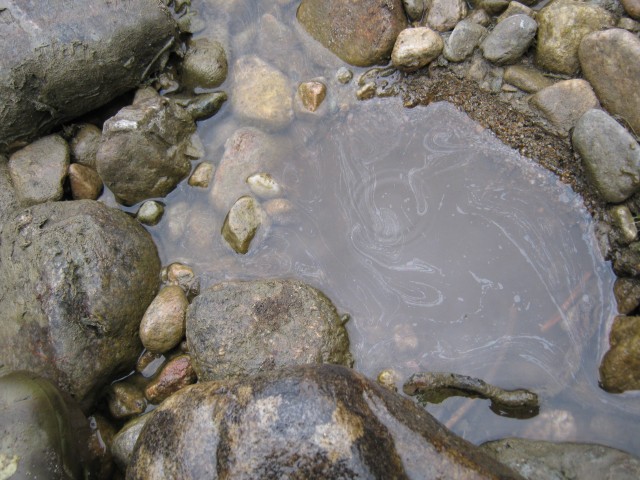 In an email dated October 15, Burden reported these observations: “Two days ago I noticed a slick at Perry’s bridge, on the west bank a few metres down from the bridge. I took pics and video’d it. I went back yesterday and it was still there, swirling around in a back eddy. This was a large slick at least a metre wide and 3 metres long. It’s funny that this only appeared, to my knowledge, after the booms had been removed. Today I noticed it has gone.

“Much of the lower part of the valley bears the slight odor of decomposing jet fuel. Today there was more of a smell further down the valley than here at Lemon Creek. This is probably because the booms have been removed and any residual product is flowing directly into the river, gathering in back eddies and off-gassing.

Another photo taken by Burden south of the confluence of Lemon Creek and Slocan River.

“But of course, as we’ve been told, smell alone does not constitute a health hazard. As health effects aren’t immediately apparent, I guess only time will tell. Sometimes I get the feeling we are all guinea pigs.”

I am a poet, journalist and author with a strong commitment to the environment and social justice. If anything, I have too many interests and too little time in a day to pursue them all. Film, poetry, literature, music, mythology, and history probably top the list. My musical interests lie firmly in rock and blues with a smattering of folk and world music. I consider myself lucky to have lived during the great flowering of modern rock music during its Golden Age in the late 1960s/early '70s. In poetry my major inspirations are Dylan Thomas, Rilke, Neruda and the early 20th century British/American poets: Auden, Eliot, Cummings. My preferred cinema includes the great French auteurs, Kirosawa, Orson Welles, and Film Noir. My preferred social causes are too numerous to mention but include banning GMOs, eliminating poverty (ha-ha), and a sane approach to forest conservation and resource extraction. Wish me—wish us all—luck on that one!
View all posts by seanarthurjoyce →
This entry was posted in Lemon Creek jet fuel spill, The Kootenays and tagged civilization, environment, public health, Slocan Valley tanker disaster, social commentary, the kootenays. Bookmark the permalink.