Notes from the Endgame: Former Quantum Murray worker speaks out

Posted on October 31, 2013 by seanarthurjoyce

INTRODUCTION: A former Quantum Murray employee recently sent me this email expressing frustration with the environmental remediation of Lemon Creek. It’s a pertinent insight into what I’ve called The Politics of Self-Regulation, showing how—once again—people and the environment come last after political, insurance and financial priorities. To protect this worker I have not identified the person.

“Great reporting—these are the stories. Thanks for your continued work on this story. On my last days working for Quantum Murray I felt like they started defending their actions by pointing out that this was an ‘experimental’ cleanup and that we could only continue cleaning if the Minister of Environment said we could. The story was that we were no longer allowed to keep cleaning because the river was declared safe for drinking and the risk of us re-contaminating the river was greater than the benefits of keeping cleaning the mouth of Lemon creek. On the last day, I was told several times that if I was not able to clean without stirring up the ‘product’ I would have to stop working all together.

“The biggest problem with the whole cleanup was that there was little official acknowledgment of the experimental nature of the effort and the environmental monitoring. In my mind, we were cheated of a real opportunity to learn from what was and was not done effectively. Information needs to be available. We need to be able to ask the right questions to learn from our mistakes. As somebody who ran against Walter Popoff in the last regional district election, I can say that the way the spill was handled will be an issue that sticks around for some time to come. If there are things that we can learn from this unacknowledged experimental cleanup they are likely related to the political and insurance issues that determined the approach and scope of the cleanup.

“It’s my guess that most of the local residents feel a little uncomfortable with the information they received and the secrecy surrounding the cleanup effort. If a poor job was done it’s because there was so much secrecy and the crew was working for the people paying for the cleanup. If anybody was supposed to be working for the local residents it should have been the Minister of Environment. Unfortunately it seems that everyone involved just wanted the whole mess to go away and be declared clean as soon as possible. But the reality is, you can still smell the fuel at different times in different places and that means there’s still a mess out there.” 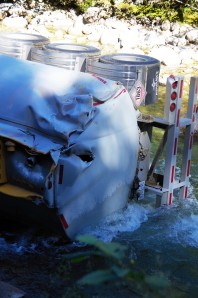 The fuel tanker in Lemon Creek: just one of an increasing number of spills and pipeline breaks. Photo Sean Arthur Joyce

Sadly this seems to be the new paradigm of environmental governance under Corporatocracy in the 21st century. If Prime Minister Harper’s Conservatives form the next government after the 2015 election, they will finish the job they’ve started with the gutting of federal environmental legislation. As retired Fisheries and Oceans biologist Otto Langer told an audience in the Slocan Valley recently, it’s a “get out of industry’s way” policy agenda, and the environment be damned.

That agenda is frighteningly near its endgame. The Conservative national policy convention is being held between October 31st and November 2nd, appropriately enough in Calgary—the real seat of power in Canada now thanks to Harper’s backroom glad-handing of the oil industry. An online conference being sponsored by the Council of Canadians and Common Causes will counter this event on November 1st with special presentations by David Suzuki and Maude Barlow. Entitled Pros and Cons: Policies for People and the Planet, you can get involved here: http://commoncauses.ca/in-action/13/06/12/pros-cons-policies-people-and-planet-free-teach-presented-common-causes

According to a news release from the Council of Canadians, even with what we know of the Conservative agenda, the leaked policy agenda for their upcoming convention is terrifying. It reads like a wish list for the greediest corporations on Earth. I’ve selected just the most bone-chilling items: move to a less progressive tax system; support the sale of public assets (can you guess to whom?); eliminate all public funding of the CBC, Canada’s flagship public broadcaster; support ‘right to work legislation’ while severely limiting how unions can spend members’ dues; gut public sector benefits and pension plans; unilaterally change how land on First Nations’ reserves is governed; and more.

How appropriate they’re kicking off the endgame of their ghastly agenda on Halloween night. That endgame does not include you and me if we earn less than at least a mid-level corporate manager. Globe and Mail CEO Philip Crawley recently admitted of his newspaper that, “We are really only interested in readers who earn more than $100,000.” In other words, if you earn less, you simply don’t count.

By dismantling what’s left of the governance structure that Canadians paid for with their tax dollars, the Conservatives will complete this country’s transformation into a patchwork of corporate fiefdoms. Canada as we’ve known it will be dead. So much for “We stand on guard for thee!” Anyone below a certain income level will have fewer and fewer rights and almost no government services of any kind. In other words, we will be de facto slaves.

North America is starting to look more and more like medieval Europe, or the dissolution of the Roman Empire. The same factors played out 2,000 years ago—the rich patrician class of Rome steadily diverting more and more of the wealth until the social structure that had made it a world power collapsed on its own rotten pillars. The result was the same as today—a fantastically rich ‘One Percent’ who owned everything and an underclass forced into indentured servitude. The empire dissolved into a patchwork of private estates owned by the wealthiest Romans—the republic was dead.

To see the parallels more clearly I encourage anyone to read historian Michael Grant’s masterful book The Fall of the Roman Empire—A Reappraisal (Annenberg School of Communications, 1976). For example, just on the issue of the Roman ‘One Percent vs. the 99 Percent’: “Crushed between the upper and lower millstones, the middle class had virtually been squeezed out of existence. …its destruction contributed very substantially to the Empire’s downfall. For it left a vacuum which nothing could fill, and meant that from now onwards the population mainly consisted of the very rich and very poor.” (page 144)

There are so many vectors of potential destruction closing on Western society it’s hard to predict which one will finally take us down. For the right wing to pursue their me-first, profit-first agenda at such a time is nothing less than despicable. At a time when oil pipeline spills and incidents have doubled in the past decade, permanently fouling some ecosystems (http://www.huffingtonpost.ca/2013/10/28/oil-pipeline-incidents-canada_n_4170381.html?ref=topbar); when the so-called Pacific gyre, an island of plastic garbage estimated between 15,000 and 700,000 square kilometres swirls like a vortex threatening to overwhelm aquatic life (http://en.wikipedia.org/wiki/Great_Pacific_garbage_patch); when electromagnetic pollution from wireless devices is creating what David Carpenter, the director of the Institute for Health and the Environment at the University at Albany in New York, has described as a looming “epidemic of cancers…” (http://electromagnetichealth.org/audio-archives-and-more/#carpenter)

In this respect, the Lemon Creek jet fuel spill will likely go down as little more than a footnote in whatever future histories remain to be written of our time. But I’m willing to predict that the generations that inherit this mess will view our business and government ‘leaders’ as nothing less than the arch-criminals of the day. In discussing the microwave radiation threat alone, former British intelligence operative Barrie Trower states that those who propagated this dangerous technology will be viewed as perpetrators of a “mass genocide” that will make the genocide of World War II look like a cakewalk. According to Trower, as we did with the Nuremberg Trials, we’ll see criminal trials where those responsible will be treated with the same gravity as Hitler, Stalin and Pol Pot. (http://www.magdahavas.com/barrie-trower-speaks-about-microwave-radiation/)

That is, if it’s not too late by then.

I am a poet, journalist and author with a strong commitment to the environment and social justice. If anything, I have too many interests and too little time in a day to pursue them all. Film, poetry, literature, music, mythology, and history probably top the list. My musical interests lie firmly in rock and blues with a smattering of folk and world music. I consider myself lucky to have lived during the great flowering of modern rock music during its Golden Age in the late 1960s/early '70s. In poetry my major inspirations are Dylan Thomas, Rilke, Neruda and the early 20th century British/American poets: Auden, Eliot, Cummings. My preferred cinema includes the great French auteurs, Kirosawa, Orson Welles, and Film Noir. My preferred social causes are too numerous to mention but include banning GMOs, eliminating poverty (ha-ha), and a sane approach to forest conservation and resource extraction. Wish me—wish us all—luck on that one!
View all posts by seanarthurjoyce →
This entry was posted in Civilization, environment, History, Lemon Creek jet fuel spill, social commentary, The Kootenays and tagged civilization, democracy, environment, history, public health, Slocan Valley tanker disaster, social commentary, the kootenays. Bookmark the permalink.