Posted on November 3, 2013 by seanarthurjoyce

Millie Sanderson Takes Up the Cause

1: June 1884. The town of Peterborough is alight with the news. A bona fide star in the heavens of Christian philanthropy is coming—Dr. Thomas John Barnardo. Ladies in afternoon tea parlours spread the news like summer brushfire.

“Can you imagine? Such a great man—the saviour of poor children—coming here!” Mrs. Whyte leans forward as if to emphasize the point.

“Oh, it’s so exciting!” Mrs. Bradburn’s tone is almost girlish. “Did you know he has a reputation as a first-rate preacher?”

“I understand he will be preaching in our very own George Street church!”

Mrs. Whyte is quiet suddenly, delicately sipping tea. Her brow creases as if worried. “Will it be alright, do you think? I mean, having the little urchins coming into Peterborough?”

Mrs. Bradburn examines her companion with a mildly puzzled expression on her face. She decides not to pursue the questions she’s hearing in her brain. “I understand Mr. and Mrs. Cox have fitted out their old mansion on Conger’s Hill quite nicely for the children. Hazel Brae, they call it. Charming.”

Mrs. Whyte goes back to sipping tea, humming through it. “Mmmm. Yes. But will they lower the tone of the town, do you think?”

Mrs. Bradburn now looks mildly annoyed at having to engage the question. “What do you mean, tone?”

Now it’s Mrs. Bradburn’s turn to go silent and sip delicately. After a decent silence, she changes tack. “Well I do love a good preacher. Shall we attend Dr. Barnardo’s Sunday sermon then?”

“The place will be packed to the rafters. It’s the buzz of the town.”

Dr. Barnardo at his desk in the Stepney Causeway office in London, world headquarters for his work. Image: public domain

2: Millie Sanderson is tired. She’s only recently returned from England, chaperoning over a hundred boys and girls from Liverpool. The seasickness had her regretting her job choice, but only temporarily. She does love children, truly. And the chance to spend time in London! To work with the greatest Christian philanthropist of the age, Dr. Barnardo! To be even a finger on the hand of the Lord’s work! To look into those darling expectant eyes over storytime, all asking, “Can I go to Canada, Miss? Can I?” She can’t deny she’s often wondered what fate will greet each boy and girl. Ah, but how much worse off they would be, left to the mean streets of empire?

Millie Sanderson in her secret heart is a poet. But this is not an age for women poets. So she must turn her talents to prose, writing gushing copy for Dr. Barnardo. Now that she is employed at Hazel Brae, her long list of duties includes press secretary. Though busy enough with chaperoning over-excited, sometimes cranky children; answering letters of enquiry from farmers, homesteaders and the occasional lawyer or doctor; and reading bedtime stories to anxious, confused children, Millie can still find time to write. She cherishes this time—late, late at night just before she can finally go to bed. She may not be writing poetry but she can still write poetically. 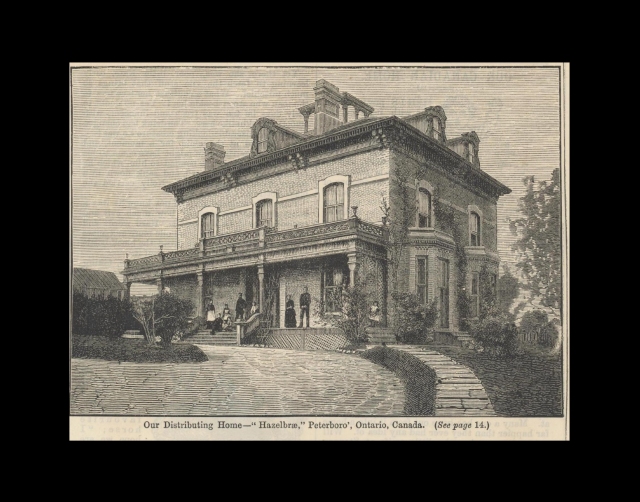 An engraving of Hazelbrae Home in Peterborough. Image: public domain

And so she does. Her story portraying Dr. Barnardo visiting one of his Homes is a vivid, vital portrait of the man in action. Her message is clear: Surely his way with his boys shows that the hand of God is upon him! He is as Jesus was with the crowds—relaxed, friendly yet in complete control. And the thousands of dollars he has raised to house, clothe, feed and train boys and girls! Surely this is greatness in a man. Surely such a man has only the best interests of the children at heart.

And yet how the dark of heart slander his name! The trade unionists, those anarchists! Blaming him for taking away jobs from able men. How they wield the mighty pen in the Toronto press, blaming Dr. Barnardo for “dumping British trash” on Canadian soil. Millie shudders. To call children “trash!” What kind of person could do such a thing?

Millie smiles to herself, pen to her lips. ‘But then, I am confident the Lord works through this man. The Doctor will know what to say. He will be as Jesus among the Pharisees, marvelling at his teaching.’ Yes. She will say a prayer for him. Better yet, she will use her writing talents to alert Peterborough readers to Dr. Barnardo’s imminent arrival.

Millie’s article is published in the June 12, 1884 Peterborough Examiner: “Short, stout, energetic in movement, rapid and graceful in speech, with massive head, clear fresh complexion, sweet winning smile and keen dark eyes which nothing can escape though he does wear spectacles, is a brief summary of the outer man. Of the inner, his abundant, unwearied and marvelously successful efforts on behalf of England’s orphan, neglected and destitute children, reveal the sympathetic heart, clear head and untiring devotion to this work of rescue, which characterize the man.

“To understand his power you should see him as I did, surrounded by 1,600 East London waifs and strays, over whom half a dozen policemen had next to no control; the moment he appeared on the platform there arose such a succession of cheers that one felt stunned with the noise, but his kindly, ‘My lads, I thank you for that welcome, now let me have silence,’ reduced the roaring, wriggling mass to a state of quietude almost incredible. Dr. Barnardo is their friend—kind, but also shrewd and firm, and so they both trust and respect him.

“Last winter when he came down to the Ilford House to give those six hundred girls their Christmas treat, another phase of his character appeared, as he joined with the utmost heartiness in the biggest, most enjoyable game of blind man’s buff I ever witnessed, and wound it all up so happily by saying, ‘Now, my children, we have played, let us also pray together.’ The man is unique in his capabilities and chosen of God for a work, the extent and influence of which no reed of ours can measure.

“In his aim for all these children Dr. Barnardo is striking grand blows at the very taproot of the great question, ‘What is to be done with the outcast population of London?’ That all will not turn out well is a foregone conclusion, but that thousands thus succeed will, by the blessing of God, become good and useful men and women, may be confidently expected. The work is a glorious one, and commends itself by the very force of its Christ-like purpose to the hearts of those who grieve over the world’s great misery and rejoice with the angels over every effort made for the uplifting of the race.

“In conclusion I ask the prayerful interest and practical sympathy of the dear Peterborough friends for the Home now being established among them, feeling sure that in helping to furnish the house and contain the work both gifts and giver will be approved of Him who said, ‘Inasmuch as ye did it to one of the least of these, ye did it unto Me.’”

3. Sanderson’s plea for support of the new Hazelbrae Home does not fall on deaf ears. At a bazaar held to raise funds for the home on July 31, 1884, the sale of various goods nets $185. The scene on Conger’s Hill is idyllic: “Early in the evening the public in large numbers began to throng the beautiful grounds of the Home. The drive approaching the building was illuminated with Chinese lanterns along its sides.

“Curiosity to see the little orphaned emigrants perhaps prompted the large number of visitors. The public so overflowed the building that there was little chance to see the youngsters to advantage. They were ranged on the stairs and sang during the evening several selections of music in a very creditable manner. Their cleanliness of aspect and their modest deportment attracted considerable attention and aroused much favorable remark.”

Sources: June 12 & July 31, 1884 Peterborough Examiner. Special thanks to Heather Aiton-Landry and the Trent Valley Archives for this material.

I am a poet, journalist and author with a strong commitment to the environment and social justice. If anything, I have too many interests and too little time in a day to pursue them all. Film, poetry, literature, music, mythology, and history probably top the list. My musical interests lie firmly in rock and blues with a smattering of folk and world music. I consider myself lucky to have lived during the great flowering of modern rock music during its Golden Age in the late 1960s/early '70s. In poetry my major inspirations are Dylan Thomas, Rilke, Neruda and the early 20th century British/American poets: Auden, Eliot, Cummings. My preferred cinema includes the great French auteurs, Kirosawa, Orson Welles, and Film Noir. My preferred social causes are too numerous to mention but include banning GMOs, eliminating poverty (ha-ha), and a sane approach to forest conservation and resource extraction. Wish me—wish us all—luck on that one!
View all posts by seanarthurjoyce →
This entry was posted in Barnardo's Homes, Home Children, social commentary and tagged Barnardo's, child immigrants, civilization, Hazelbrae Home Peterborough, history, home children, social commentary. Bookmark the permalink.