Posted on December 20, 2013 by seanarthurjoyce

I want to offer this Christmas Letter/essay to all my blog readers as a kind of gift for persisting with me throughout the year. Thank you for your support of my work. And what a year it was….

What a weird year. 13—does it give you a shiver even to say it? You try not to be superstitious but then fate gives you plenty of reason to believe. Hurricane Haiyan—the smashing boots of climate change. Russian meteorites. The Boston Marathon bombing. Parents losing beloved children to drunk drivers or cancer. And dear friends losing parents. 2013—Its Royal Thirteenness—proved itself a banner year in history for all the wrong reasons. We grieve for those who have had their hearts shaken by events this year. And as always we stand in solidarity with all people of integrity who long for a future that is so much above our baser instincts. 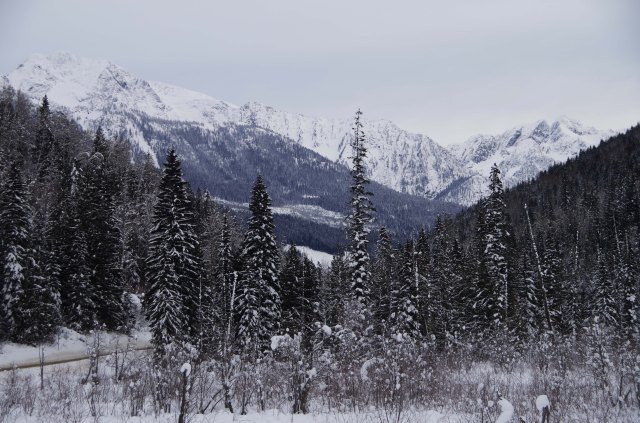 For me I can’t in all honesty say it was as hard a year as for some. A power ‘brownout’ in the depths of last winter nearly killed my computer. Many trips to the repair shop in Nelson and too much money later, it’s still not quite right. Then—amazing grace! A publisher I’d forgotten all about phoned me at home one day, wanting my book. Paul Wilson of Hagios Press in Regina said the magic words: “I think your book is superbly written and I want to publish it.” Sure, it’s not the big leagues like Penguin Books or HarperCollins, but give me time. And anyway, great presses like Hagios continue to push the boundaries and are where the real action is.

The year limped along like a wounded beast until July 26, when a terrible confluence of events conspired to pollute our valley. It started when a fuel tanker driver delivering jet fuel to a firefighting base went up a decommissioned forestry road, having taken a wrong turn. Realizing his mistake, he somehow managed to turn around. I’ll never know how on a road that narrow. On his way downhill, he hit a soft patch on a high bank, causing the truck to tip over into Lemon Creek. Within minutes, 33,000 litres of jet fuel were coursing down the creek into our watershed. In a split second, everything changed for our valley. Black Friday, indeed. Within days a town hall meeting was held, jammed with angry people. The same day, a ceremony was held by Slocan River at the Winlaw bridge. Songs were sung, tears were shed, people who were complete strangers—and friends—held hands. People here are bonded with this land. They feel both its pain and its joy.

I was at Lemon Creek the morning after, just hours after the cordon was taken off Highway 6. Slowed to a crawl to avoid giant potholes. Right behind me was the BCTV news crew with senior anchorman John Daly. Looking the 15 feet or so down the bank, seeing the twisted tanker on its side, knowing what that meant, was one of the most sobering moments of my life. It summed up the whole sickness of our civilization in one sad gesture. This is the blackjack table, folks. How much are we willing to bet? How high the stakes? If Fukushima has ghosts, it too is surely asking these questions. Hurricane Haiyan certainly has ghosts—hundreds of thousands of them, snapped from life in a millisecond. Joining the Mayan, Roman, Easter Island and Home Children ghosts….

Slocan Valley resident John Wittmayer: a tireless advocate for justice in the wake of the spill. Photo Sean Arthur Joyce

The weeks that followed were a blur. The mainstream media gave the story its usual microsecond attention span before patting us all on the head with corporate bafflegab, as if to say, “It’s alright now, folks. You can all go back to sleep now.” I made it a personal challenge to keep it in the news as much as possible. Volunteers like John Wittmayer have been similarly dogged in seeking justice for both people and the valley itself. At last count I’ve written 20 stories in a little over four months for the Valley Voice. Not to mention I don’t know how many blog posts on chameleonfire1.

CUE: Broadcasting voice: “The Valley Voice—one of the last independently-owned newspapers in Western Canada.” We’re hopelessly behind the times in some ways. But if that means not succumbing to corporate PR masquerading as news, then damn the pay and full speed ahead. If that means not closing our doors like the 300 American newspapers that died in 2009 alone—great! Jan McMurray, our editor-in-chief, sweats bullets to keep it all together. Dan Nicholson, our publisher, has his heart imbued in its very ink.

This photo hardly does justice to the lovely Jan McMurray as her other half Dan Nicholson of the Valley Voice does a poor imitation. Photo Sean Arthur Joyce

Anne had to go off to Ontario alone because as fate would have it, the Lemon Creek fuel spill happened right around the time she had to leave. It was a tremendous opportunity to see a retrospective exhibition of her Mom’s artwork at the Southampton Art Gallery. I once wrote of the paintings of the late Jane Champagne that she had “a brush full of sky.” I’ve never seen anyone who can render skies as living with breath as she could. I regret that I couldn’t be there. By remaining behind I was also able to give Jan a desperately needed break while I sat in on the editor’s chair for an issue. Then when Dan’s Mom succumbed to cancer, two other friends from the community quickly assumed his chair at the layout desk to get the paper out. Thanks Kevin and Nikta. As I’ve written of Canada’s Home Children, ‘heroes’ aren’t just people who survive battles but those who endure ordinary, everyday trials.

At about the same time Lemon Creek, the Slocan River and everything downstream was being fouled by jet fuel, our local Silverton Gallery was imploding. The gallery society’s president was trying to hold it up with just one other active director, the lease was running out, and the building needs thousands of dollars worth of work. Another ‘perfect storm.’ Sometimes life calls and you have no choice but to answer. So I joined the board, hoping to prevent the closure of a beloved venue that has served the community through dedicated volunteers for 35 years. We have a helluva lot of work ahead of us. But already some amazing allies have stepped forward—Bob Inwood, Steve Cannon, Michael Sweeny, Jim Berrill, and our dedicated new board. As president I do at times feel the vertigo of steering a ship from a teetering deck, hopefully not the Titanic.

My Vice-President Penelope Stuart has promised to stand by when I have to be away next year for the book launch tour. Both those facts continue to support me, and make anticipation of 2014 bright and exciting. Paul at Hagios is helping me plan a tour that will take in dates in Ontario, Manitoba, Saskatchewan, Alberta and BC. Now if I can just remember to pace myself…. My health has stabilized but I worry about spending a lot of time in microwave-saturated environments.

As always I thank whatever divine presences there are for Anne. She has made the past 10 years the most memorable of my life. As Bowie sang so perfectly: Golden Years. (As in radiant, not geriatric!) This year she’s been taking time to do more of her own writing. For someone who hasn’t written much since university, I’m always amazed by what she turns out. Anne is a natural poet. Her creative writing course at Selkirk College with instructor Almeda Glenn Miller has been a real eye-opener. Anne got 98% on her final mark! And her insights into the writing of Laying the Children’s Ghosts to Rest have been invaluable. She has an uncanny knack for picking out the deeper resonances in things. I wouldn’t be where I am today if it weren’t for her. And not one syllable of a cliché.

Sadly the Christmas season has been permeated by cliché in the services of marketing. It occurred to me the other day that the best ad man ever invented was Santa. Though based on cultural mythology millennia old, he’s been turned into a Wal-Mart greeter. “Love, peace, and— Oops! Cleanup on aisle 9!” (Thanks for that line, Anne.) Maybe this year Father Christmas should be the ghost of Nelson Mandela. All the glowing tributes in the media struck me as sycophantic, insincere. In this Golden Age of Corruption, to praise the values Mandela stood for while enslaving ourselves to the God of Economy is far more than merely ironic.

So let’s call Mandela Father Christmas this year and meditate on what he stood for. Oh, and by the way, imitation is the sincerest form of flattery….

I am a poet, journalist and author with a strong commitment to the environment and social justice. If anything, I have too many interests and too little time in a day to pursue them all. Film, poetry, literature, music, mythology, and history probably top the list. My musical interests lie firmly in rock and blues with a smattering of folk and world music. I consider myself lucky to have lived during the great flowering of modern rock music during its Golden Age in the late 1960s/early '70s. In poetry my major inspirations are Dylan Thomas, Rilke, Neruda and the early 20th century British/American poets: Auden, Eliot, Cummings. My preferred cinema includes the great French auteurs, Kirosawa, Orson Welles, and Film Noir. My preferred social causes are too numerous to mention but include banning GMOs, eliminating poverty (ha-ha), and a sane approach to forest conservation and resource extraction. Wish me—wish us all—luck on that one!
View all posts by seanarthurjoyce →
This entry was posted in Christmas, Lemon Creek jet fuel spill, social commentary, The Kootenays and tagged Christmas, civilization, environment, Slocan Valley tanker disaster, social commentary, the kootenays. Bookmark the permalink.