Twilight of the Renaissance Man? Pt.2

Posted on January 20, 2014 by seanarthurjoyce

Part 2: The Author as Visionary

“Men with strong religious and revolutionary faith, men with well thought-out plans for improving the lot of their fellows, whether in this world or the next, have been more systematically and cold-bloodedly cruel than any others.” —Aldous Huxley, Eyeless in Gaza, Flamingo Modern Classic edition, 1994, p. 296

Eyeless in Gaza was first published in 1936, yet Huxley’s meditations on politics in this novel never lose relevance. They should be taught in every Politics 101 course under the heading, The Dangers of Ideological Purity. The Communist movement during the 1930s was constantly bubbling just beneath the surface of European politics in the lead-up to World War II. Huxley treats it with suspicion—again, perhaps anticipating the atrocities of Stalin. In Eyeless, the Communist purists insist that revolution can only come about by a cleansing in blood of the old order.

A younger Aldous Huxley: Brave New World continues to strike the ire of censors 80 years after its publication. Must be doing something right! Courtesy The Guardian

“As though you could use violent, unjust means and achieve peace and justice! Means determine ends, and must be like the ends proposed. (italics mine) Violence and war will produce a peace and a social organization having the potentialities of more violence and war. The war to end war resulted, as usual, in a peace essentially like war; the revolution to achieve communism, in a hierarchical state where a minority rules by police methods… Peace and social justice, only obtainable by means that are just and pacific.” (p. 211) Clearly this lesson had not been learned by the dawn of the 21st century, as America prepared to violently impose its economic and political philosophy on Iraq and Afghanistan.

The character of Dr. Miller, a medical doctor in Eyeless, reveals the real secret of politics, which comes down to the personal level: “Thoughts determine actions. If you call a man a bug, it means that you propose to treat him as a bug. Whereas if you call him a man, it means that you propose to treat him as a man. …If one looks for men, one finds them. Very decent ones, in a majority of cases. For example, go among a suspicious, badly-treated, savage people; go unarmed, with your hands open. Go with the persistent and obstinate intention of doing them some good—curing their sick, for example. I don’t care how bitter their grievance against white men may be; in the end, if you’re given time enough to make your intentions clear, they’ll accept you as a friend, they’ll be human beings treating you as a human being.” (p. 381)

To be a Brahmin or a revolutionary? That is the question… Courtesy Wikimedia Commons

Huxley had a clear-eyed awareness of the nature of paradox. This was no starry-eyed idealist offering a simplistic prescription for enlightenment. He understood the challenges for activists dedicated to social justice, who often feel powerless against the status quo and may be tempted to use violence. This is where the genius comes in—Huxley had a mind capable of grasping the complexities of almost any situation. Like the Buddhists and the Brahmins he understood the fundamental dance of opposing forces that exists from the micro- to the macroscopic, from the cell to the star system. Here is his meditation on unity vs. separation in Eyeless:

“The unity of life. Unity demonstrated even in the destruction of one life by another. Life and all being are one. Otherwise no living thing could ever derive sustenance from another or from the unloving substances around it. One even in destruction, one in spite of separation. …Reality of unity, but equal reality of division… One is constantly aware of it. Constantly aware of being unique and separate; only sometimes, and then most often only intellectually, only as the result of a process of discursive thought, aware of being one with other minds, other lives and all being. Evil is the accentuation of division; good, whatever makes for unity with other lives and other beings. …And of course, if there is to be existence—existence as we know it—being must be organized in closed universes. Minds like ours can only perceive undifferentiated unity as nothing. Unescapable (sic) paradox that we should desire that n should be equal to one, but that, in fact, we should always find that one is equal to nought.”

It’s the perpetual conundrum for those concerned with social justice: Do we try to change the status quo, or accept it in the knowledge that the pendulum will swing yet again in the universal dance of opposites? If we merely accept it based on this philosophic premise, are we complicit in its crimes and misdemeanors? 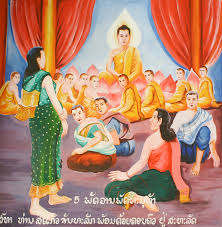 Huxley anticipated the West’s fascination with Buddhist concepts in his novel Eyeless in Gaza. Courtesy Wikimedia

“Separation, diversity—conditions of our existence. Conditions upon which we possess life and consciousness, know right and wrong and have the power to choose between them, recognize truth, have experience of beauty. But separation is evil. Evil, then, is the condition of life, the condition of being aware, of knowing what is good and beautiful.” (A very Buddhist idea.) “That which is demanded, that which men come finally to demand of themselves, is the realization of union between beings who would be nothing if they were not separate; is the actualization of goodness by creatures who, if they were not evil, would not exist. Impossibility—but none the less demanded.” (pp.404-07)

The point, Huxley writes, “is that one demands of oneself the achievement of the impossible,” in contrast to establishment ‘realists’ who attack artists motivated by conscience to protest injustice. The desperate, vicious attacks against Neil Young for his stand on the tar sands is a prime example. (http://www.cbc.ca/q/blog/2014/01/13/neil-young-oilsands-occupation/) “Man’s reach must exceed his grasp or what’s a heaven for?” (Robert Browning)

Kurt Vonnegut: another novelist who defied literary conventions and wrote some great essays.

There’s enough just in one quote from Eyeless to chew over for years and find still more jewels missed the first time around. And I haven’t even touched on the technical virtuosity displayed by Huxley in this novel, with its constant shifts forward and backward in time. For 1936, this was a radical innovation, one that would not be picked up again until Kurt Vonnegut’s Slaughterhouse Five (1969). It has since become a staple of storytelling, especially in film. It granted Huxley the long view as he played out the logical contradictions of his characters’ ethical and philosophical positions over two decades or more.

I have no doubt that our intelligence-operative-turned-novelist would trash Huxley’s novels as unreadable, or at least as unpublishable in today’s literary market. Many creative writing instructors might agree, arguing that in today’s highly specialized world, it’s best to leave philosophy to philosophers, economics to economists, history to historians, and “just stick to the story.” There are enough specialists out there—more than ever as our population reaches the 7 billion mark. And who reads essays anymore? Huxley was a first-rate essayist in a long tradition that was born with Montaigne and the 18th century Enlightenment writers. Yet to deny ourselves the coruscating shower of ideas falling from the pages of the great essayists is both tragic and limiting. It leaves no room for the individual as Renaissance Man or Woman in training, the willing, hungry mind eager to learn as much as possible within the short frame of one lifetime.

And ironically, the ‘Information Age’ fostered by the Internet has devolved to the Age of Misinformation, where critical filters seem mostly offline. As Nicholas Carr has written in The Shallows (http://www.theshallowsbook.com/nicholascarr/Nicholas_Carrs_The_Shallows__Excerpts.html) the very nature of the click-a-minute Google-everything universe is changing our brains, making it harder for people to integrate information into ‘big picture’ thinking. We’ve exchanged quality for quantity, and it shows in the infantile bantering and bullying of social media. Meanwhile, our writers—the ones society once looked to for leadership in thinking—are being told crap like, “Dostoyevsky would never be published today.”

So is this indeed the Twilight of the Renaissance Man or Woman? For the sake of our future, our richness as a culture and our ability to grow spiritually, let’s hope not. We can be grateful to stellar practitioners of the written word like Huxley, whose scintillating prose will continue to illuminate thought for generations. “The spirit of the dead lives on in God,” he writes in Eyeless. “But it also lives on in the minds of the living—helping them, making them better and stronger.” (p. 69)

UPDATE: It seems Huxley’s writing continues to strike a chord in readers, even if some still don’t get the point. (Increasingly the problem these days, it seems.) The Guardian reports that Brave New World was among the top 10 books Americans tried to ban in 2010 (http://www.theguardian.com/books/2011/apr/12/brave-new-world-challenged-books).

I am a poet, journalist and author with a strong commitment to the environment and social justice. If anything, I have too many interests and too little time in a day to pursue them all. Film, poetry, literature, music, mythology, and history probably top the list. My musical interests lie firmly in rock and blues with a smattering of folk and world music. I consider myself lucky to have lived during the great flowering of modern rock music during its Golden Age in the late 1960s/early '70s. In poetry my major inspirations are Dylan Thomas, Rilke, Neruda and the early 20th century British/American poets: Auden, Eliot, Cummings. My preferred cinema includes the great French auteurs, Kirosawa, Orson Welles, and Film Noir. My preferred social causes are too numerous to mention but include banning GMOs, eliminating poverty (ha-ha), and a sane approach to forest conservation and resource extraction. Wish me—wish us all—luck on that one!
View all posts by seanarthurjoyce →
This entry was posted in Activism, social commentary, Writing and tagged activism, books, civilization, politics, social commentary, writing. Bookmark the permalink.

2 Responses to Twilight of the Renaissance Man? Pt.2