Posted on March 2, 2014 by seanarthurjoyce

Death by Bureaucrat. It’s a helluva way for a civilization to go. And I don’t just mean government bureaucrats. I’m talking about the whole executive and professional class. This class is in single-minded pursuit of a platinum card lifestyle at a time when many are lucky to have a job at all. Add to that the lobbying to legislate professional services in building codes and other regulations, and you have a double whammy. Even some of the trades are getting in on the act. Recent revisions to the BC Building Code now require licensed technicians for a job as simple as installing a septic tank. Overnight, by ‘professionalizing’ this service, the price jumped from as low as $500-1,000 to three times that amount for an average residence.

Meanwhile, with infrastructure in North America averaging 50-100 years in age and crumbling, capital funding to address the problem is drying up. Right at the very time we need it most. Talk about a recipe for disaster. Australian newspaper The Age reported in its business section: “Australian business leaders have called on international governments to boost infrastructure spending and unlock $US 57 trillion ($63 trillion) of funding over the next two decades, as finance ministers and central bankers gather in Sydney for the annual G20 meetings.” You know things must be bad when even businessmen are sounding the alarm. Normally they’re busy convincing politicians why they should be de-funding public infrastructure so they can pour more into business subsidies and trade deals.

It’s a bizarre dichotomy. At the very time when neocons are pushing to eliminate government—or at least, any government services they might have to pay taxes for, or any regulation of their activities whatsoever—the bureaucracy continues to mushroom. It’s something my father lamented often in his final years with the BC Ministry of Forests. I used to dismiss it as mere conservative dogma but recent experience proves me wrong. 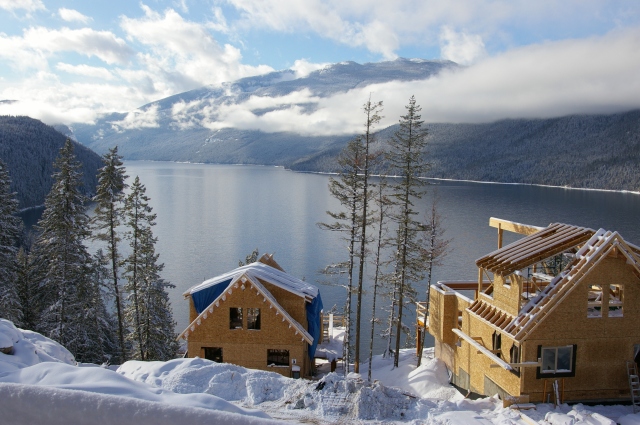 As a reporter I’m acquainted firsthand with the travails of small town mayors and councils struggling to keep up as more and more services are downloaded from higher levels of government. Minus the funding, of course. Communities across BC are having a larger bureaucracy foisted upon them as federal and provincial authorities jettison responsibility. Villages like Nakusp and Kaslo (population about 1,500 each), New Denver and Silverton (population 550 and 200 respectively) now have on average three professional staff members, including a CAO (Chief Administrative Officer), CFO (Chief Financial Officer) and administrative assistants. In the past these small rural communities would have functioned quite well with a single staff member. Grants available to municipalities must now increasingly be used to pay for staff salaries while once again infrastructure (and public services) go begging.

Not least on the top of the hit list are the salary and benefits rates of top BC Hydro executives and specialists. This electricity provider is one of the last publicly owned energy corporations in North America. It was a triumph of partnership between government and the public, providing the cheapest energy on the continent for generations of BC taxpayers. That was Premier WAC Bennett’s pitch: you the Public put up the money we need to build the dam infrastructure, we guarantee you and your children cheap electricity.

Province reporter Michael Smyth wrote in a September 26, 2013 article that BC Hydro has 2,667 employees who made more than $100,000” in 2012, or more than 45 percent of the Crown corporation’s workforce. So at least the ‘rank and file’ isn’t as badly paid as a Target or Wal-Mart employee. But wait a minute. Look at BC Hydro executive Charles Reid, who pulls down over $500,000 annually. “His compensation included a $57,240 performance bonus and an $85,450 pension contribution,” Smyth reported. Greg Reimer, Hydro’s vice president of transmission and distribution, saw his “compensation package soar more than $100,000—a 33 percent increase—in just three years.” Three other BC Hydro executive salaries are in the $375,000–440,000 range. While this may be chickenfeed compared to what Disney or Wal-Mart executives earn, it illustrates a managerial culture out of control.

Of course, the entire corporate culture of the past 20 years has been overrun by bloated executive pay. According to the AFL-CIO, “The CEOs of S&P 500 Index company made, on average, 354 times the average wages of rank-and-file US workers in 2012.CEOs in the United States don’t just make a lot more money than their own employees. On average, US CEOs also make far more than CEOs of comparably sized companies in other developed countries.” In the case of corporations such as Wal-Mart, the differential is even steeper: 1,034 times the average worker. (Source: payscale.com) Target, Walt Disney, McDonald’s and Honeywell executives top out at around 500 times the pay of their workers.

It’s the classic con job: ‘Trust us, we’re experts. We have the expertise you lack. Therefore we deserve more.’ I have no problem with paying more to someone who knows how to service a computer, write and edit a book, or run heavy equipment than to McDonald’s counter staff. But 500–1,000 times more? Is business management so esoteric, so rare a skill that an executive is worth 500 times more than a service technician? Who makes such a decision? (No points for guessing.)

As I said earlier, the net effect of this top-heavy bloating of corporate salaries is that it drains resources from the very workers who create the wealth in the first place. Disenfranchise enough of them, and your whole economic model collapses. It’s estimated now that up to 70 percent of the American economy is based on consumer spending. What happens when unemployment hits 25–40 percent? Meanwhile the recession deepens, largely thanks to Wall Street and the banksters siphoning off huge amounts of bailout money. As I’ve always said: Wealth is not infinite. Resources on this planet—including financial—are finite. For someone to be obscenely rich, someone else must be obscenely poor. 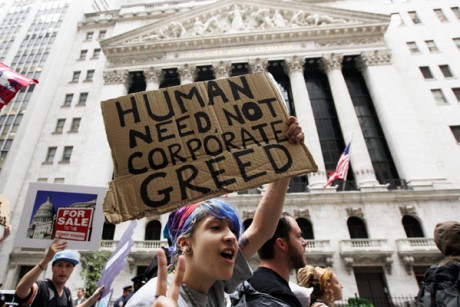 Occupy Wall St. protestors in the heart of the beast.

The opening quote from Australia’s business elite reveals that even they are starting to realize this is an unsustainable equation. (Though it doesn’t yet seem to have penetrated the rigid brains of the North American business community.) Canadian humourist Terry Fallis does a masterful job of satirizing the situation in his novels The Best Laid Plans and The High Road. He speaks of the well-hidden “infrastructure deficit” that successive regimes in Ottawa have put off in the name of “national deficit reduction,” arguably another neocon scam. Meanwhile, our roads, bridges, schools and hospitals continue to deteriorate at a rate that outpaces money spent on infrastructure.

I hate to sound like a broken record, but it’s a pattern that’s played out before. If I refer too often to historian Michael Grant’s assessment of the fall of the Roman Empire, it’s because his analysis is so thorough and penetrating. He describes the same phenomenon of mushrooming bureaucracy, so that the Empire became “essentially a bureaucratic state. …For it becomes clear that the bureaucracy of the later Roman Empire was not only rigid, over-conservative and slavish, but also desperately corrupt.” Grant explains how Theodosius I and his contemporary writers “confirm that efficient public servants had become so rare that they are singled out in astonished tones for exceptional praise. The best type of man just did not go into such jobs at all. Even retired officials still remained rapacious. ‘An office once held,’ remarked Salvian, ‘gave them the privilege of a perpetual right to rob others.’” An attempt by later emperors to cut back on bureaucracy by the age-old tactic of centralization not only backfired, it “slashed personal freedom still further (and) harnessed the government with increasing responsibilities which it was quite unable to carry.” In their European dominions the oppression of the Roman bureaucracy was so great that it practically guaranteed the Visigoth invasion of 378 AD.

Please note: I’m not making a commentary on any individual civil or corporate executive. But unfortunately the nature of a bureaucracy of any kind is to expand, at the expense of everything around it. After awhile you can’t put a nail in the wall without a license. And after you’ve paid all the fees and the executive salaries there’s no money left for nails anyway…

The Fall of the Roman Empire: A Reappraisal, Michael Grant, Annenberg School of Communications, 1976, pp. 148, 153

I am a poet, journalist and author with a strong commitment to the environment and social justice. If anything, I have too many interests and too little time in a day to pursue them all. Film, poetry, literature, music, mythology, and history probably top the list. My musical interests lie firmly in rock and blues with a smattering of folk and world music. I consider myself lucky to have lived during the great flowering of modern rock music during its Golden Age in the late 1960s/early '70s. In poetry my major inspirations are Dylan Thomas, Rilke, Neruda and the early 20th century British/American poets: Auden, Eliot, Cummings. My preferred cinema includes the great French auteurs, Kirosawa, Orson Welles, and Film Noir. My preferred social causes are too numerous to mention but include banning GMOs, eliminating poverty (ha-ha), and a sane approach to forest conservation and resource extraction. Wish me—wish us all—luck on that one!
View all posts by seanarthurjoyce →
This entry was posted in Civilization, social commentary and tagged activism, civilization, democracy, economy, social commentary, the kootenays. Bookmark the permalink.