Posted on May 1, 2014 by seanarthurjoyce

Now that spring has finally arrived here in the mountains, the bullshit just keeps right on flowing along with the glacial melt. As I reported in the April 23 Valley Voice issue (http://www.valleyvoice.ca/_pdf_2014/ValleyVoice140423web.pdf), MLA for Kootenay West Katrine Conroy did a fine job of taking Environment Minister Mary Polak to task for the government’s inaction on the Lemon Creek jet fuel spill. Polak waffled on the question of compensation for affected Slocan Valley residents, claiming the government “has no authority” in this area despite the Provincial Emergency Program’s Compensation and Disaster Financial Assistance Regulation, which provides relief to BC residents affected by “uninsurable” natural disasters. Of course, the Lemon Creek spill is man-made, so no doubt the government will exploit this fact when it comes to compensation. 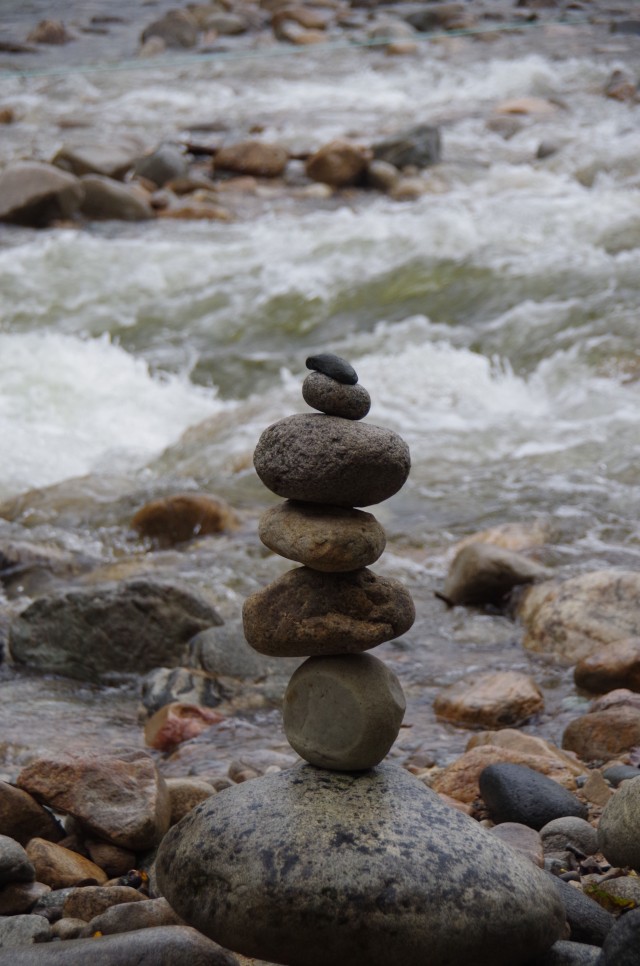 Another point that was brought up with Conroy’s grilling of the minister was the fact that the Ministry of Environment did not recognize the years of baseline data collected by Slocan River Streamkeepers. While Polak said they would accept the data, there’s no guarantee it will be incorporated into a review of the assessment being done by SNC Lavalin, the firm hired by Executive Flight Centre (EFC) to do post-spill monitoring. SNC Lavalin has claimed Streamkeepers’ data is “not required.” According to Streamkeepers biologist Jen Yeow, it was actually a letter from Lemon Creek resident Claire Dicken that prompted Conroy’s debate with the minister. Dicken followed the chain of authority, first submitting the letter to her regional district representative for Area H, Walter Popoff, who then sent it to Conroy.

“But it was a citizen who was angered by events that started the ball rolling, not us,” says Yeow. “The government can brush us off but it has more force when citizens complain. It’s important for people to see how ineffective this government is.”

SNC Lavalin said they aren’t seeing evidence in the ecosystem of the complex hydrocarbon chain C19-32 despite the fact that it was present in initial post-spill monitoring of both water and sediments. This is significant because it’s these hydrocarbons that tend to persist in the environment, whereas lower chain hydrocarbons do not. Further testing will need to be done for these persistent hydrocarbons once the spring freshet has had a chance to flush out the watershed. Yet SNC Lavalin has said there’s no point in monitoring for higher molecular weight hydrocarbons. Another report from the  firm, with test results for both hydrocarbons and benthic invertebrates, is expected within two weeks.

“If they don’t report the presence of C19-32 then we’ll be all over them like a ton of bricks,” Yeow says. “But if they’re honest then we can have a dialogue. We know the invertebrates are impacted because we sampled downstream and there was none there, absolutely nothing. So if the report is missing key data or testing parameters we’ll be challenging them.”

Yeow explains that without a high invertebrate population, the fish will start dying off for lack of food. That could have disastrous consequences for all the flora and fauna in the Slocan River watershed.

EFC has launched its own lawsuit against the Province of BC, asserting that responsibility for the accident accrues to the Ministry of Forests, Lands and Natural Resource Operations (FLNRO) for not properly decommissioning resource roads and for providing improper directions. The Province will naturally deny culpability, resulting in a legal brawl described by valley resident Jim Ross as “a festival of finger-pointing.” Meanwhile residents – human or otherwise – are left out in the cold.

“My cynical thinking goes that EFC will withdraw its lawsuit in exchange for lowered standards of monitoring and cleanup,” Yeow says. “You have to assign blame somewhere and I have to say, EFC has a pretty good case because the Province hasn’t done a good job of maintaining its decommissioned roads. What we’re pretty suspicious about is that we’ve caught wind that they’re not going to keep monitoring after this year and we say it should be at least three years post spill.” 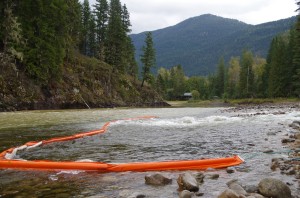 The gutting of compliance and enforcement staff in the ministries of forestry and environment means this government has taken mostly a hands-off approach to environmental monitoring. Allowing the company that created the spill in the first place to hire its own monitoring agency gives residents here little confidence in the process. Especially when the firm in question has been cited as among the most corrupt on the planet, as Claire Dicken notes in her letter. Yeow doesn’t expect to be doing any more hydrocarbon testing this spring but Streamkeepers will be assessing the Slocan islands – just downstream of the spill site – to monitor impacts. Once again it’s clear that British Columbians are getting very little value for their taxes. And once again Slocan Valley residents can be thankful for the expertise and willingness that exists here to do the job right.

I have reproduced Dicken’s letter below since it’s such an excellent example of citizen advocacy – clear, carefully fact-checked and with a devastatingly focused argument.  In desperation she addressed it to Kathy Eichenberger, Executive Director of the Columbia River Treaty Review, Ministry of Energy and Mines.

I am writing you because we have had inadequate or no response from individuals at the Ministry of Environment. I am told that you have a long-standing connection to our region and serve as head of the negotiating team for the Columbia River Treaty (CRT) renewal.

I want to express my grave concerns regarding the transparency and effectiveness of the monitoring process being conducted after the Lemon Creek fuel spill by SNC Lavalin for Executive Flight Centre. My husband and I own the first piece of private property downstream of the July 26, 2013 spill. We have approximately 38 acres adjacent to the creek and over one kilometre of creek frontage.

We have had an aquatic biologist, a microbiologist, a biologist, and a hydrological geologist view this area since the spill. All have expressed serious concerns regarding the ongoing contamination from the spill and the very minimalistic and non-transparent monitoring plan put forth and implemented by SNC Lavalin. A private sediment sample was done and analyzed the end of September 2013, which showed hydrocarbon levels nearly as high as the samples done four days after the spill!

When we enquired, we learned that SNC Lavalin claimed that C19 carbon range found was “not associated with the Jet-A1 Fuel” (they claimed it had not been detected in any of the samples collected to date). However, when we reviewed the Ministry data released at the end of September, C19 was, in fact, detected at over 6 parts per million (sample labelled WB 01-20130808) in water. I am not a chemist, but this inconsistency does not engender confidence in SNC Lavalin’s effectiveness in monitoring and Ministry’s ability to give direction.

We also learned that SNC recently monitored a large back channel on our property; we reviewed the report submitted by SNC on November 26th. We were disappointed to see no analytical testing of sediment for hydrocarbon. In addition, there was no reference to the prolific growth of algae noted below the spill site and no monitoring of the critical wetlands below the Slocan-Lemon confluence. Lavalin’s response was that Jet A-1 was toxic to algae and so they had no need to investigate. In our nearly 25 years as owners of this property, we have never seen an algae bloom; the demarcation at the spill boundary in Lemon Creek (above vs. below the spill) regarding algae bloom is visually stark. As far as we can see, their report only looked at fish, dead fish and enumerates vegetation without citing any baseline data.

Resident Claire Dicken says in 25 years of living near Lemon Creek she has never seen an algae bloom like this one post-spill. PHOTO: Jon Burden

Per Section 36 of the federal Fisheries Act, deleterious substances in fish-bearing streams are considered a criminal offence. It is my understanding that the federal government will be using data generated by the Province, through SNC Lavalin, to determine if such an offence occurred. Lemon Creek is a spawning creek for the endangered Brown Trout. It has been monitored for years by the Slocan Streamkeepers, and their baseline data should definitely be incorporated into any monitoring program. It is my understanding that the Slocan Streamkeepers have offered to make this data available (e.g. Benthic invertebrates, and fish counts) if they are allowed to participate in the monitoring process and have equal access to SNC’s data. MoE should also be on-site to represent public interest and to ensure the transparency of the process.

Are you aware that Canada is #1 on the World Bank’s Corrupt Companies Blacklist, with SNC Lavalin and its affiliates being credited for 115 of 117 infractions listed?  Here’s is the link to the article:

This outrageous distinction does not engender trust in the current process, quite the contrary.  We need to be able to trust the process; we need transparency.

The Province is currently negotiating with the US on the CRT. How will we have a credible position at the negotiating table if the Province does not recognize the value of, and acknowledge and support the credible community-based groups that have data (like the Slocan Streamkeepers and the Slocan Valley Monitoring Programs of the 1990’s)? Slocan Streamkeepers is a member of the cross-border Columbia Roundtable, which is comprised of Non-governmental Organizations from the US and Canada working together for a unified environmental position for the CRT negotiations.

I await your response.  Thank you.

I am a poet, journalist and author with a strong commitment to the environment and social justice. If anything, I have too many interests and too little time in a day to pursue them all. Film, poetry, literature, music, mythology, and history probably top the list. My musical interests lie firmly in rock and blues with a smattering of folk and world music. I consider myself lucky to have lived during the great flowering of modern rock music during its Golden Age in the late 1960s/early '70s. In poetry my major inspirations are Dylan Thomas, Rilke, Neruda and the early 20th century British/American poets: Auden, Eliot, Cummings. My preferred cinema includes the great French auteurs, Kirosawa, Orson Welles, and Film Noir. My preferred social causes are too numerous to mention but include banning GMOs, eliminating poverty (ha-ha), and a sane approach to forest conservation and resource extraction. Wish me—wish us all—luck on that one!
View all posts by seanarthurjoyce →
This entry was posted in environment, Lemon Creek jet fuel spill and tagged environment, Lemon Creek fuel spill, nature, politics, public health, Slocan Valley tanker disaster, the kootenays. Bookmark the permalink.

1 Response to Spring in the Mountains: Lemon Creek update