For as long as we’ve been on this planet, light has been a symbol of hope, warmth, rebirth. At Halloween we light bonfires to chase away not only the dark but the evil spirits. And at night we light candles to take us softly into the evening. Light that holds the dark at bay.

When we made it to the Centennial Park beach just before 9:00 pm there were already hundreds of people there. Many were struggling with the hot air balloons that seemed to be a big hit. Dozens of orange globes were already soaring into the twilight over Slocan Lake. Someone said they thought they’d seen one make it all the way across the lake to Valhalla Park—a fitting and beautiful destination for departed souls. Some of us watched nervously as others drifted into the trees lining the beach and the cloth balloons started to burn. An indigo sky kept the mountains half in daylight. 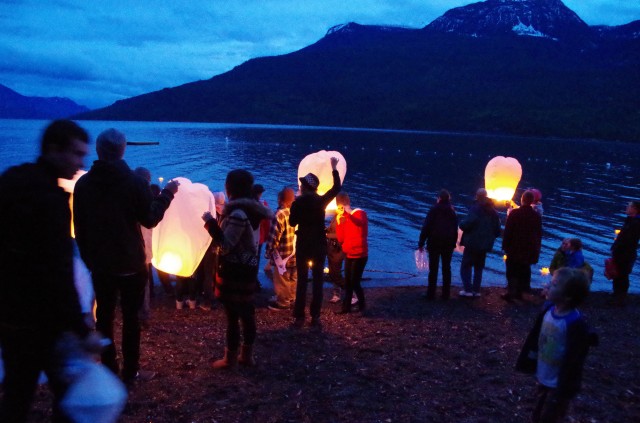 Strung across the waves like a living garland were the candles floating pearly on paper lilies. It all felt like such a relief after probably the worst week in the village’s history. The loss of four vital, promising young lives. This tragedy has affected an entire village, even those of us without children. During my time away on the book tour there were moments when the tears wouldn’t wait, even in the middle of Calgary International Airport. Often we were asked by people we met in Calgary and Saskatchewan about the progress of the recovery effort on Slocan Lake.

The Japanese lantern ceremony Tōrō nagashi is held on the last evening of the Bon Festival, releasing paper lanterns onto a river. The ceremony is based on the belief that this guides the spirits of the departed back to the other world. As with the terrible loss just experienced by the New Denver community, the Tōrō nagashi is often held to commemorate events of great loss of life such as the bombing of Hiroshima.

Watching those orange-lit globes lofting gracefully into the evening sky made me think of the spirit’s journey. Here in Western Canada we have a mosaic of cultural traditions that includes the Japanese who were forcibly relocated to the Slocan Valley. The primarily British, Irish, Welsh, Scottish, and Scandinavian families that followed the early mining prospectors to this valley brought with them Western traditions of honouring departed souls. How serendipitous then that the 19th century surveyor who came this way was Scandinavian and christened these mountains the Valhallas. The great mountain hall of the gods—a place of feasting and continual happiness such as they never knew while on Earth.

Watching these balloons soar into the night sky over the Valhalla Mountains was a spiritual experience. Photo Sean Arthur Joyce

But that may be but little comfort to grieving parents. What’s of more comfort is knowing the incredibly supportive nature of this community. They were certainly all there at the lantern ceremony. Suddenly the usual divisions between people fell away. Someone said to me, “Maybe this was their great gift to us, that they brought a whole village together across all lines.”

The late Irish poet and mystic John O’Donohue, in his book Eternal Echoes, offers spiritual guidance to those facing tragic loss. “The time of grief is awkward, edgy, and lonesome,” even in the midst of a crowd of well-meaning people. “At first, you feel that it is totally unreal. With the belonging severed, you feel numbed,” O’Donohue explains. What accounts for this feeling that eviscerates us as no other feeling can? “When you love someone, you are no longer single. You are more than yourself. It is as if many of your nerve lines now extend outside your body towards the beloved, and theirs reach toward you. You have made living bridges to each other and changed the normal distance that usually separates us. When you lose someone, you lose a part of yourself that you loved… Grief is the experience of finding yourself standing alone in the vacant space with all this torn emotional tissue protruding. In the rhythm of grieving, you learn to gather your given heart back to yourself again. This sore gathering takes time. You need great patience with your slow heart.” (John O’Donohue, Eternal Echoes, pp. 241-42)

The American Blackfeet people believe—as do many other First Nations peoples—that the realm of the dead walks beside us and even interacts with us from time to time. This is an ancient belief, reflected in many myths and religions around the world. How ‘true’ it is doesn’t really matter. What matters, as O’Donohue points out, is that we receive some sustenance for the spirit through our contact with the memory of the departed. “As the years go on, you may not remember the departed every day with your conscious mind. Yet below your surface mind, some part of you is always in the person’s presence. From their side, our friends in the unseen world are always secretly embracing us in their new and bright belonging.” (John O’Donohue, Eternal Echoes, p. 244) Often they reach out to us in both dreams and waking thought.

So it’s fitting that an entire community turned out at dusk on the shores of Slocan Lake for the lantern ceremony. It was a chance both to send off the souls of four young people with love and to remind ourselves that, as the wisdom traditions teach, they are always with us.

I am a poet, journalist and author with a strong commitment to the environment and social justice. If anything, I have too many interests and too little time in a day to pursue them all. Film, poetry, literature, music, mythology, and history probably top the list. My musical interests lie firmly in rock and blues with a smattering of folk and world music. I consider myself lucky to have lived during the great flowering of modern rock music during its Golden Age in the late 1960s/early '70s. In poetry my major inspirations are Dylan Thomas, Rilke, Neruda and the early 20th century British/American poets: Auden, Eliot, Cummings. My preferred cinema includes the great French auteurs, Kirosawa, Orson Welles, and Film Noir. My preferred social causes are too numerous to mention but include banning GMOs, eliminating poverty (ha-ha), and a sane approach to forest conservation and resource extraction. Wish me—wish us all—luck on that one!
View all posts by seanarthurjoyce →
This entry was posted in Slocan Lake tragedy and tagged community, empathy, Slocan Lake tragedy, the kootenays. Bookmark the permalink.