“Poetry is the universal language which the heart holds with nature and itself.” —William Hazlitt

The following poem was written in the horrendous emotional aftermath the New Denver community has been suffering since the deaths of four young people on Slocan Lake May 10, 2014. I had tried to write a poem in their honour but a year later as I write I find myself unsatisfied with the result. As so often happens in the aftermath of tragedy, it can be difficult to see or think clearly. Writers often find they need a long period of gestation in order to moderate the initial rush of emotion into something that will be readable and not mired in extremes. 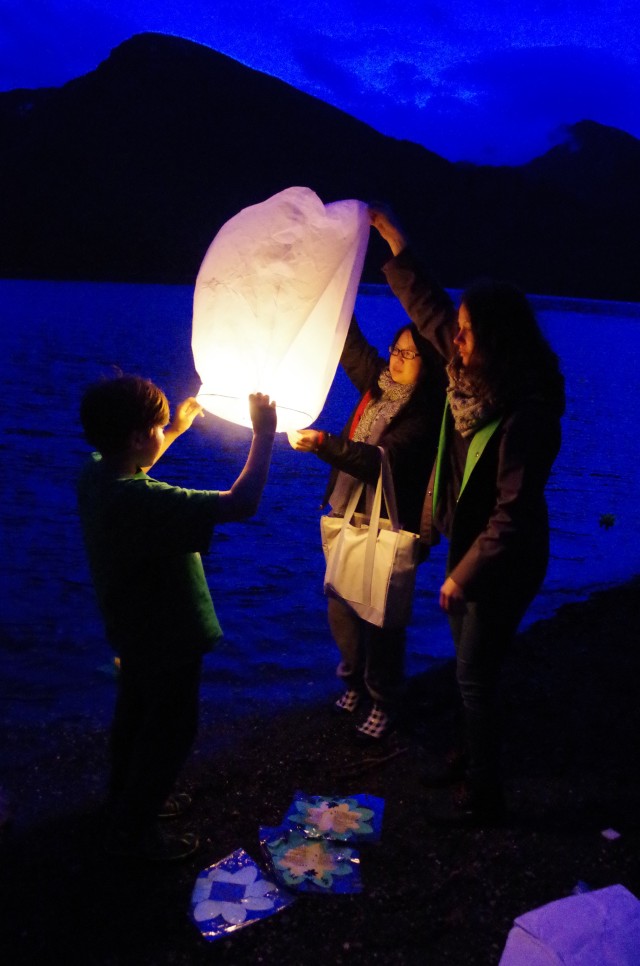 Launching lanterns into the sky above Slocan Lake in memory of Lily, Hayden, Skye and Jule. Photo Sean Arthur Joyce

But time equals distance and distance often equals clarity, and the poem I originally published on this blog in May 2014, Grandfather Raven: Ache, turned out to be a pastiche of two different and rather incompatible voices. In other words, two poems, not one. I re-absorbed the Grandfather Raven passages into the Dead Crow poems and finally finished the poem you now see here, Blind Eye. I sincerely hope it does justice to the memory of four lives tragically cut far too short.

Poetry has always been the most spiritual of the arts, in my view. Skillfully written, a single line can offer the reader multiple levels of meaning. Time and time again in my life when I’ve been confronted with pain and struggle, poetry has come to my aid and comfort. Poetry offers us a view of realms we only occasionally glimpse in our waking lives. By connecting with heart, with spirit, the poem reminds us that those who leave us are always present at levels far deeper than the physical.  That’s poetry’s great gift to us.

—for the four young people—Lily, Skye, Jule and Hayden—killed in a canoeing accident, May 10, 2014, New Denver, BC

that sits so serene

behind the wedding party

by the spring melt

while on the mountainside

new lives busy in the air.

We awake to life still

grasps at the sun too soon—

to press an ear to Earth,

for the stem crushed

by a thoughtless heel,

of a spinning globe.

The world rises with us,

folds its beak in soft moss

and wakes hungry enough to kill.

This is not personal.

This is a force that walks in fire

and sings in water—

a voice spun out of beauty

and ugliness, and too often,

only the aged can hear it.

I am a poet, journalist and author with a strong commitment to the environment and social justice. If anything, I have too many interests and too little time in a day to pursue them all. Film, poetry, literature, music, mythology, and history probably top the list. My musical interests lie firmly in rock and blues with a smattering of folk and world music. I consider myself lucky to have lived during the great flowering of modern rock music during its Golden Age in the late 1960s/early '70s. In poetry my major inspirations are Dylan Thomas, Rilke, Neruda and the early 20th century British/American poets: Auden, Eliot, Cummings. My preferred cinema includes the great French auteurs, Kirosawa, Orson Welles, and Film Noir. My preferred social causes are too numerous to mention but include banning GMOs, eliminating poverty (ha-ha), and a sane approach to forest conservation and resource extraction. Wish me—wish us all—luck on that one!
View all posts by seanarthurjoyce →
This entry was posted in Poetry, Slocan Lake tragedy and tagged empathy, poetry, Slocan Lake tragedy. Bookmark the permalink.