Posted on August 4, 2014 by seanarthurjoyce

For a historian, it’s a rare day you get to unearth and publish an original manuscript. Cole Harris, whose grandfather Joseph Colebrook (‘JC’) Harris was one of the first permanent European settlers in New Denver, will release a series of history booklets based on his family’s writings. The first, Boom Days in the Slocan, will feature excerpts from a manuscript written by JC Harris in 1944, never before published. JC arrived here from Vancouver Island in 1896. The book – published by Chameleon Fire Editions – will be launched at New Denver’s Knox Hall Thursday, August 14, 7 pm. 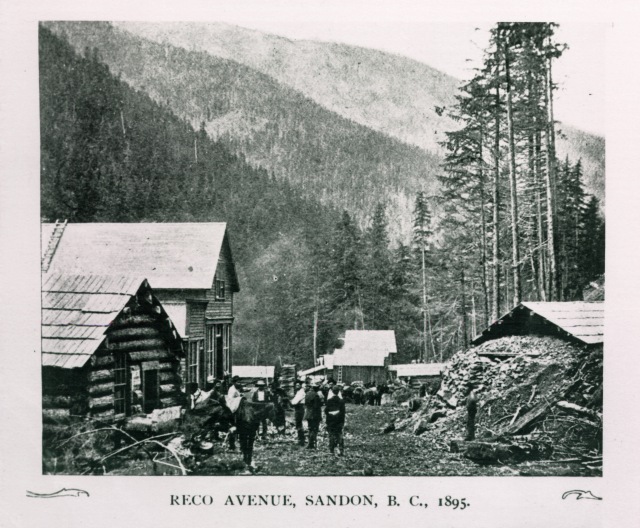 The beginnings of Reco Ave. in Sandon. Courtesy BC Provincial Archives

“It was written because my mother asked my grandfather to write an account of his coming to Canada from England, attending Guelph Agricultural College, moving to Vancouver Island and then to the Slocan Valley. My mother was working for the CBC and thought they might possibly be used for some broadcasts. My grandmother had died and so she thought, ‘Well this might be a way to take a grieving old man away from his grief.’”

The tactic worked – JC Harris pounded out 150 pages of reminiscences on a typewriter. But after his death in 1951, the manuscripts sat in boxes of family papers for decades. Cole Harris, by then embarked upon an academic career in historical geography, decided about 1970 they should be preserved in the BC archives in Victoria along with others of his grandfather’s papers. It was Cole’s son Douglas who reignited the spark of interest in JC’s manuscripts. Upon retirement, Cole decided it was time to do something with these valuable historical documents.

“My son Douglas copied a number of them and tried to set them in some sort of order. My grandfather went off in a number of tangents and just wrote what came into his head, although he was a very competent writer. Then I spoke to you about it and I think you called it a ‘gold mine.’ So that convinced me it needed to be published.”

Although JC Harris came from a well-educated, somewhat privileged English family, his writing is primarily anecdotal. But what anecdotes! Imagine getting an eyewitness glimpse of the characters who first populated or passed through the upper Slocan Valley in the late 1890s! While New Denver pioneer Eli Carpenter is well known historically, JC writes of even earlier settlers, including West Kootenay pioneer Martin Fry. “Twelve men wintered in the Slocan at the mouth of Carpenter Creek in the winter of 1891–’92,” he writes in Boom Days. “[The next year] hundreds were flocking in from Revelstoke down to Nakusp and from there over the nearly 40 miles of rough trail to New Denver. Still more came in by boat up the Kootenay Lake to Kaslo and from there by trail (soon to be made into a wagon road) to Three Forks and on down Carpenter Creek to New Denver.”

The thread that has tied local history to our American cousins was evident even in the earliest days, when the mining boom brought prospectors from all over North America. But while ‘lynch law’ prevailed in many American frontier outposts, from the start our more British way of life meant a strict enforcement of law and order. JC seems to have had an eye for the unforgettable moment, the frontier characters etched indelibly into memory. He writes of Gold Commissioner Alex Sproat and a local policeman named MacDonald calmly taking weapons from a tough American mountain man without so much as raising their voices. Bribery – another tactic occasionally indulged south of the border – also failed to subvert the course of British justice here. These are just two examples of many recorded in Boom Days in the Slocan, making it a vital addition to the canon of local history along with John Norris’s Old Silverton.

The next booklet planned for the series, The Beginnings of the Bosun Ranch, will recount JC Harris’s memories of building a life for his family here. To this day Cole and Muriel Harris maintain a summer home on property originally staked out by Cole’s grandfather. The mark made on the historical landscape by his grandfather has been echoed by Cole on the academic landscape. The three-volume Historical Atlas of Canada, released in 1987, has become a standard text in universities. Cole edited the first volume, covering Canadian prehistory up to about 1800 and the first 300 years of early contact with First Nations. It was a monumental task that he says “took far longer than it should have.”

Three Forks, near Sandon, just being carved out of the bush. Courtesy BC Provincial Archives

When asked if his grandfather’s fascination with history had any effect upon his own choice of career, Cole has little doubt. “My whole experience with the Bosun Ranch, the creation of this new place on the edge of a new land, has influenced my whole scholarly career. A new geography of settlement was being created and in some respects what was happening here in this farm was going on across the whole country. My first book was on early French settlement in Canada; that was another valley, another set of characters, farms on terraces overlooking the St. Lawrence so the parallels are definitely there with this valley.”

He emphasizes however that the booklet series will not be academic writing and will feature writings both from himself and his father. Not insensitive to our First Nations predecessors on the landscape, one booklet will discuss evidence of their presence on Idaho Peak. JC Harris was that most valuable of settlers – a literate and astute observer, fully capable of setting down his observations for future generations. Although not all of his writings have survived, according to Cole, “his memory was sound and he was fond of wry and amusing incidents.” His legacy is a body of lively writing, a priceless snapshot of a brief moment in Western Canadian history.

“My grandfather arrived here as a privileged young Englishman but he wasn’t English by the end of his life, he was resolutely Canadian. There could be no counterparts for this life in the British Isles, it was impossible. Life was moving along in a different trajectory. Just as it did for those British Home Children who were shipped here; their lives took a very different turn.”

For more information visit the Chameleon Fire blog at www.chameleonfire1.wordpress.com.

I am a poet, journalist and author with a strong commitment to the environment and social justice. If anything, I have too many interests and too little time in a day to pursue them all. Film, poetry, literature, music, mythology, and history probably top the list. My musical interests lie firmly in rock and blues with a smattering of folk and world music. I consider myself lucky to have lived during the great flowering of modern rock music during its Golden Age in the late 1960s/early '70s. In poetry my major inspirations are Dylan Thomas, Rilke, Neruda and the early 20th century British/American poets: Auden, Eliot, Cummings. My preferred cinema includes the great French auteurs, Kirosawa, Orson Welles, and Film Noir. My preferred social causes are too numerous to mention but include banning GMOs, eliminating poverty (ha-ha), and a sane approach to forest conservation and resource extraction. Wish me—wish us all—luck on that one!
View all posts by seanarthurjoyce →
This entry was posted in History, Slocan Valley, The Kootenays and tagged books, Cole Harris, history, JC Harris, New Denver, Slocan, Slocan Valley history, the kootenays. Bookmark the permalink.