Food, big sky, horses, love, loss, redemption. How Canadian is that? To find out, check out one of the readings by Saskatchewan-based author dee Hobsbawn-Smith, who will be visiting the north Slocan Valley as part of her Western Canada tour. She will read from her new collection of short stories from Thistledown Press, What Can’t Be Undone. A versatile writer, Hobsbawn-Smith will also feature readings from her 2014 poetry collection from Hagios Press, Wildness Rushing In, and Foodshed: An Edible Prairie Alphabet, based on her experience as a chef and restauranteur. Local launch dates includes the Nakusp Public Library on Tuesday June 23, 7 pm, and at Knox Hall, New Denver, Wednesday June 24, 7 pm. I recently interviewed dee to provide some background context for her three books.

dee Hobsbawn-Smith at the launch of Wildness Rushing In at Calgary’s Shelf Life Books, May 2014. Photo Sean Arthur Joyce

Foodsmith was my restaurant. I opened it in 1992, after years in the trenches as a cook and sous-chef. We served and honoured local food on our menu as one of two ‘first locavore’ restaurants in Calgary, way ahead of the locavore zeitgest. It seated 37. I changed the menu daily and made everything from scratch. The restaurant was a huge critical and popular success, but not a financial one, and continues to be viewed as a game-changing restaurant that re-imagined the face of food in the city of Calgary. I sold it in 1994 because of health problems, and because I had two young sons. After I sold it, I started to work on the first of three best-selling cookbooks.

My column did not arise directly from my restaurant. I started writing as a freelance journalist in 1995, writing for the Calgary City Palate, an excellent bimonthly food mag [still in existence!] and several other local and national magazines before I started as a columnist for the Herald in 2001. My weekly column in the Calgary Herald was called The Curious Cook. In it, I explored cooks, chefs, local food growers, wide ranges of food issues and philosophies from urban hunger to local sustainable food production and ethnic influences. Calgary has a huge and diverse ethnic population, and of course, recipes. It was an incredibly popular column and was widely admired and respected by chefs, restaurateurs and consumers alike, and was picked up and run in the newspaper’s syndicated sister newspapers across the country. It spawned my fourth book, Shop Talk, the definitive ingredients resource guide for cooks. In 2008, when the Herald started to bleed red ink, I was let go, along with many other freelancers.

I started cooking as a kid, and made supper every night for my family by age 15 when we moved from the west coast to the family farm in Saskatchewan. Feeding others has always fed something in me, and it contributes to my sense of community, as does Slow Food, which I have been involved with for 15 years. My mom tells me that my great-grandmother was a pastry chef, and I grew up in a family that always ate home-cooked meals. 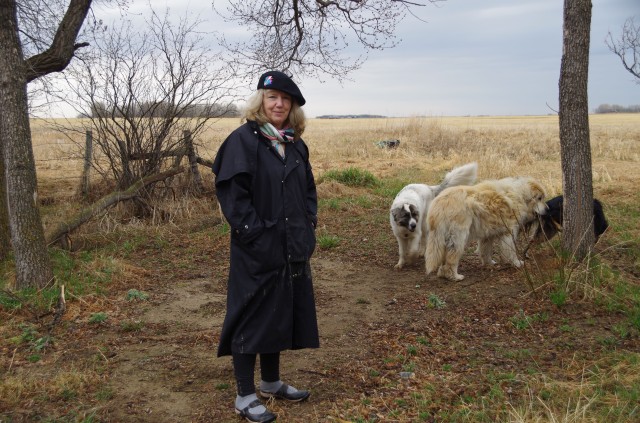 Dee on the Saskatoon farm she inherited from her parents. Photo Sean Arthur Joyce

I went to professional cooking school in Vancouver in 1981-82, and moved to Calgary in ’83, where I worked in a series of small specialty restaurants. Then I attended cooking school with one of the great French grande dames, Madeleine Kamman, in France, which was a life-changing experience, and taught me the importance of ‘eating your view’ and trusting your palate as you develop a personal cuisine. I later attended professional cooking schools in Ireland and Calgary, where I earned my Red Seal as a chef. I ran a high-end catering company in Calgary before I opened the restaurant in 1992. After I sold my restaurant, I wrote the first of my cookbooks, which was published in 1997, followed by 2 more cookbooks, then a food sourcing guide, and in 2012, Foodshed.

Foodshed arose from far more than my column. At the time, I was also organizing and leading annual farm tours, and was the leader of Slow Food Calgary, and I was teaching thousands of adults and children in Calgary how to cook. Sourcing local ingredients was a common theme, and I had also developed personal connections and ties with local growers as a chef, restaurateur and caterer. In the pursuit of these ends, I and for my column as well, I drove all over the province, interviewing growers and learning the foodshed. The book, which profiles 76 food families, is not a compendium of columns, but new material. I wrote it in 2011, after moving to Saskatchewan. It explores the issues, politics, challenges, satisfactions, risks, distribution conundrums, ups, downs and pleasures of small-scale food production for a local market, from succession planning, labour, land and water issues, GMOs, chemical vs. natural farming, CSAs and other distribution models, Slow Food, government interventions, oil and gas, etc. It also includes my own photographs and 26 recipes, matching its whimsical alphabetized approach to ingredients, in keeping with my belief in gate-to-plate. [NOTE: The book has received three international awards.]

I’d been a full-time freelance journalist and writer since 2001; by 2005, I was writing not-very-good poems and short stories as well. When a poet friend suggested I apply to Sage Hill Writing in SK to improve my skills, I realized that if I was to become the poet and fiction writer I imagined I might become, I needed to learn more about writing and put some serious effort into the craft. I believe that writers only write as well as they read, so I started to read more widely, and attended Sage Hill for the 1st time in 2005. (Sage Hill offers small group workshops with leading authors to allow writers to improve their craft and develop their writing projects.) I realized soon after that I wanted to shift my focus from food writing to literature. I attended Sage Hill again in 2008, 2009, 2012, 2013 and will return this summer for the 6th time, this time to work on my new novel-in-progress with author Miriam Toews.

I moved to Saskatchewan in 2010 to re-organize my life and become a full-time literary writer, living on my family’s land west of Saskatoon, land where my mom had been raised. Before I moved, though, I began attending writers retreats in the province, and in 2011, I took part in the Saskatchewan Writers Guild mentorship program, with poet Elizabeth Philips. In 2012, I enrolled in the MFA in Writing program at the U of S in Saskatoon, and graduated in 2014. My thesis was a novel, which is now in its sixth draft. I also have an essay collection and a new poetry collection underway.

These stories had their genesis long before I attended the U of S. I started two of them in Calgary long before I ever imagined moving to Saskatchewan to become a full-time writer. One was begun at Wallace Stegner House in Eastend, a writers’ retreat. Another was started at Emma Lake, former home of the Saskatchewan Writers Guild summer writers and artists retreat, and a third had its start at St. Peter’s Abbey, site of the Writers Guild winter writers retreat.

The theme is indeed tied to human resiliency. In life, we all face disasters and disappointments on many scales, and how we respond to the challenges we are dealt determines to a great extent the quality of our lives. I’ve always considered intelligent perseverance to be among the cardinal virtues, and in this collection, my protagonists find ways to make the most of their lives after tough times come calling. That’s life—getting on with it, finding ways to be happy if you can. Or at least getting on with the new reality as best you can. 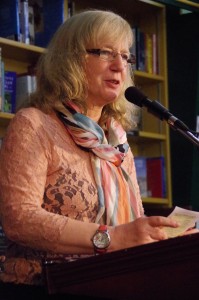 Dee reading her poetry at McNally-Robinson Books in Saskatoon, May 2014. Sean Arthur Joyce

The poems in Wildness Rushing In had a long gestation—ten years, but as with any ‘new’ genre, the first book takes longest to produce as one masters the form, and it took me ten long years to get these poems right. The second book of poems won’t take so long, I hope! The poems are arranged in several sections; the ones that chronicle and reflect on my move to Saskatchewan were relatively quick to write, [as such things go!] taking form after the flood of 2011, for the most part.

What prompted them? Many things: a failed romance, falling in love in my 50s, a flood—unexpected in dry land. My sons, my mother, my family, my dad, my brother who passed way at 19. Moving as a teen to SK. Some of these poems are unflinching looks at painful family moments; some of them are pieces my mom can’t stand to read. There is not one consistent overriding theme throughout the collection; I tend to view such poetry books with suspicion, but there are themes that present themselves repeatedly: count the chickadees, the horses, the water images.

Dee wishes to acknowledge the support of her partner and well-known author Dave Margoshes in her blossoming writing career. Margoshes is the author of two new books, God Telling A Joke, a collection of short stories from Oolichan Books; and Wiseman’s Wager, a novel from Coteau Books.

I am a poet, journalist and author with a strong commitment to the environment and social justice. If anything, I have too many interests and too little time in a day to pursue them all. Film, poetry, literature, music, mythology, and history probably top the list. My musical interests lie firmly in rock and blues with a smattering of folk and world music. I consider myself lucky to have lived during the great flowering of modern rock music during its Golden Age in the late 1960s/early '70s. In poetry my major inspirations are Dylan Thomas, Rilke, Neruda and the early 20th century British/American poets: Auden, Eliot, Cummings. My preferred cinema includes the great French auteurs, Kirosawa, Orson Welles, and Film Noir. My preferred social causes are too numerous to mention but include banning GMOs, eliminating poverty (ha-ha), and a sane approach to forest conservation and resource extraction. Wish me—wish us all—luck on that one!
View all posts by seanarthurjoyce →
This entry was posted in Books, Poetry, Writing and tagged books, CanLit, creativity, dee Hobsbawn-Smith, interviews, poetry, Sean Arthur Joyce, writing. Bookmark the permalink.