A steady stream of people responded to an invitation to the open house for the Sinixt archaeological pit house site near Lemon Creek on Sunday, July 12, hosted by Drs. Nathan Goodale and Alissa Nauman. Students from the archaeology program at Hamilton College in New York State and the anthropology program at Selkirk College in Castlegar, BC provided interpretation of dig results at four separate sites along the Slocan River significant in the prehistory of the Sinixt people (pronounced “Sin-eye-kst”, meaning “People of the Place of Bull Trout”).

The Sinixt, dubbed the ‘Arrow Lakes band’ by government agents in the early European settlement period, were declared an ‘extinct people’ in 1956 by the Canadian government, when less than a dozen of the tribe still lived in the region. That decision provokes controversy to this day, not least with the Sinixt themselves, who were mostly dispersed to the Confederated Tribes reservation in Colville, Washington. In the late 1980s, Sinixt elders from Colville re-established a permanent presence in the Slocan Valley in response to plans to build a road through a traditional burial ground at Vallican. Since that time their efforts have resulted in the repatriation of many ancestral bones to the burial site from various museums. However, despite a quarter century of legal efforts, neither the provincial nor the federal government has granted their appeal to revoke the extinct status. Former Sinixt spokesperson Marilyn James believes the decision is not only political but financial. She thinks government officials fear legal status could provoke a massive compensation claim for traditional territorial lands flooded under the Columbia River treaty. However, archaeological excavations have established that—to use a Sinixt term—they are the ‘mother tribe’ of the southeastern British Columbia region, with roots extending back some 3,500 years. 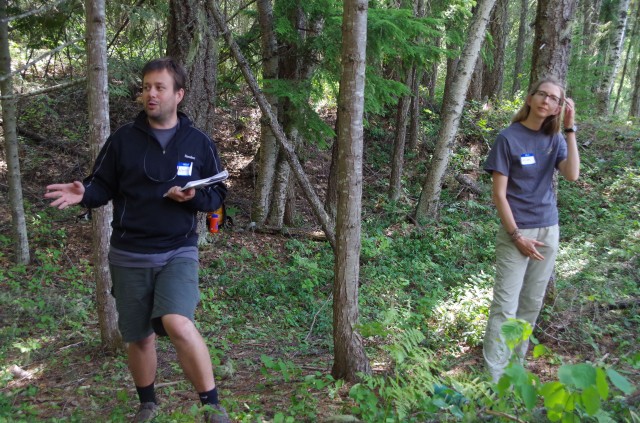 Drs. Goodale and Nauman stand in a depression that would once have been a Sinixt pit house. Photo Sean Arthur Joyce

Dr. Goodale explained that the site along the Slocan Narrows is one of the most significant archaeological sites of its kind in North America due to the fact that the river has not been dammed, leaving most pit house sites intact. There is evidence of a substantial winter settlement between here and Slocan city, with some 90 pit house sites identified. At the narrows, the settlement was divided by the river, with some 23 houses located on the west side and another nine on the east. Goodale said the original mapping of the site was done by ethnographers in the late 1970s—valuable because even since then, the river has risen, flooding some of the sites and bisecting others along the banks.

The pit houses would have been lived in from late fall to early spring, at which point the seasonal round of migration to fishing and food gathering sites would have begun. About once every couple of decades, the pithouses were burned as a means of cleansing them and removing rotten or insect-infested roof beams. (The roof was covered with branches, earth and other readily available local materials.) There is now reliable carbon dating to prove occupation as early as 3200 years BP (before the present) until the time of first contact with Europeans in the late 1700s, when a smallpox epidemic decimated local Sinixt populations. Although occupation was not continuous, many sites were re-used repeatedly over the centuries. An unexplained gap in occupation occurs between about 2500–2000 BP. Dr. Goodale said studies on the west coast of BC have shown that a sudden drop in fish populations around this time may have had something to do with the sudden abandonment at Slocan Narrows.

Each site is assessed for four archaeological markers: lithics (stone implements), charcoal and faunal remains (bones), identifying features such as hearths, post holes and tool-making areas, and of course artifacts such as arrowheads. Due to the acidity of the soil along the Slocan River, where the forest floor is covered by evergreen needles, bones deteriorate fast and are typically only found in small fragments. Others would have been burned in hearth fires. The oldest pit house excavated by the team has been dated to two separate occupations: 2600 and 600 BP. Each site is divided into several one metre by one metre squares and carefully excavated using time-honoured archaeological techniques—old fashioned brushes and trowels and careful, back-bending labour. Modern techniques come into play when soil samples are taken and sent back to the lab for chemical and geological analysis. Fragments of carbon from wood fires used for cooking, light and heating in the pithouses are assessed using radiocarbon-14 dating. Dates are accurate to within two or three centuries, so other means are used to narrow down dates, such as dating artifacts found at the same site.

The most recent pit house at the site was dated to only 300 years ago. Another one dated to about 1100 years ago. At a site closest to Slocan River, visitors were shown a pit house site bisected by the rising waters; this site has been buttressed along the shore by stones to prevent further deterioration. Also at this site was a small excavation that revealed a different kind of habitation, probably a ‘mat lodge,’ made similar to a teepee and covered with birch or other bark. In contrast to the winter pit houses, this was likely used as a summer shelter. Evidence was found of heat-cracked rocks. The Sinixt traditionally heated rocks and then put them into cedar baskets full of water in order to cook food or soften fibre.

Archaeology students stand in a pit house depression. All sites are filled in once analysis is completed. Photo Sean Arthur Joyce

The digging season at the site has only a few days remaining this year before students head back to the lab. But their excitement was palpable as they spoke of their finds—a stone bowl probably used in a mortar and pestle, flakes of chert showing that arrowheads and other tools were made or sharpened here, and a Kamloops-style arrowhead found close to the river. Evidence of Sinixt travel from the southern reach of their territory at Kettle Falls, Washington comes in the form of quartzite fragments originally used for tool-making as well as small pieces of volcanic rock—both positively associated with Washington geography. (The northern reach of traditional Sinixt territory was near Revelstoke, BC—headwaters of the Columbia River.)

Because the site is on Crown land, it is protected by the provincial regulations governing heritage and archaeological sites, making it a crime to disturb pit house sites or remove any artifacts. Dr. Goodale said Hamilton College has an agreement with the Royal BC Museum to eventually return any artifacts to that facility for appropriate storage or display. This year marks the 15th anniversary of archaeological excavations at Slocan Narrows. All pit house sites are carefully filled back in once research and analysis is completed. Consultation with some 11 BC Interior First Nations bands—including the Sinixt—is routine for all excavations.

I am a poet, journalist and author with a strong commitment to the environment and social justice. If anything, I have too many interests and too little time in a day to pursue them all. Film, poetry, literature, music, mythology, and history probably top the list. My musical interests lie firmly in rock and blues with a smattering of folk and world music. I consider myself lucky to have lived during the great flowering of modern rock music during its Golden Age in the late 1960s/early '70s. In poetry my major inspirations are Dylan Thomas, Rilke, Neruda and the early 20th century British/American poets: Auden, Eliot, Cummings. My preferred cinema includes the great French auteurs, Kirosawa, Orson Welles, and Film Noir. My preferred social causes are too numerous to mention but include banning GMOs, eliminating poverty (ha-ha), and a sane approach to forest conservation and resource extraction. Wish me—wish us all—luck on that one!
View all posts by seanarthurjoyce →
This entry was posted in Archaeology, Sinixt First Nation, The Kootenays and tagged archaeology, Hamilton College, history, Nathan Goodale, Selkirk College, Sinixt pit house excavations, Slocan River, Slocan Valley tanker disaster, the kootenays. Bookmark the permalink.