“Mythology is not a lie, mythology is poetry; it is metaphorical. It has been well said the mythology is the penultimate truth—penultimate because the ultimate cannot be put into words.”  —Joseph Campbell[1]

For me as a writer—and particularly as a poet—the hero’s journey has been one of realizing the hidden potential of mythology. Campbell said that “mythology is poetry,”[3] and that poets are among the prime movers of myth. He wrote that, “poets are simply those who have made a profession and a lifestyle of being in touch with their bliss.”[4] This touches on another phrase coined by Campbell, “following one’s bliss” as a prime characteristic of the Hero’s Journey. It’s a byword that has been sadly oversimplified in mass culture to mean a kind of narcissistic pursuit of self-interest at the expense of others. Given his emphasis on the hero as one who returns from a journey of self-discovery to return a gift to the community, to serve society with his talents and awareness, this is a grave misinterpretation of the role of mythology in our lives.

After many years of studying world mythology, I embarked upon my own Hero’s Journey in 2009 when Anne Champagne and I travelled to England and Ireland. It became both a cultural pilgrimage to explore my family history and a journey that followed the footsteps of mythology. As a side benefit, I also found myself serendipitously falling into a kind of writer’s pilgrimage, visiting sites of significance to great writers—George Bernard Shaw’s English estate in Wheathampstead, Tennyson’s relics in the museum of Carisbrooke Castle on the Isle of Wight, the grave of Yeats in Sligo county, Ireland. Although I hadn’t planned it that way, my English relatives, knowing I was a writer, were keen to point me toward such sites of literary pilgrimage. Amazing how things often fall into place when you’re following the spirit’s prompting, or what I like to call the Path of the Ancestors.

The author at Yeats’ grave in the shadow of the Ben Bulben ridge, Sligo County. Photo Anne Champagne

Before we ever left Canada I spent months researching Irish mythology. I have as much Irish ancestry as English, so I’ve naturally always been drawn to that side of my family legacy. The Irish mythic cycle, its Gaelic title (Lebor Gabala Erenn) translated loosely as ‘The Book of Invasions,’ had fascinated me for years. This story of an invading nation—the legendary De Danaan, whose resemblance to Tolkien’s Elvish race is probably not accidental in his books—and the already established Fir Bolg, a kind of proto-prehistoric race—is emblematic of Irish history. An island nation, battered not only by the spume of Atlantic tides, but by successive waves of invading peoples—Norsemen, Normans, Anglos—to mention only the featured players. What was outstanding about ‘The Book of Invasions’ was its showpiece, the two Battles of Moytura, located in the Lough Arrow valley of County Sligo. Unusually for a battle tale, instead of simply streaming an occupation force over the Irish plains and valleys, the leaders of the De Danaan and the Fir Bolg agreed to first have a meeting of their two champions to see if they might resolve their differences peacefully. The two warriors, Bres the De Danaan and Sreng the Fir Bolg, became fast friends. But as is all too often the case, fear and politics undermined their attempt to avert a bloodbath, setting off not one but two fierce battles in Moytura.[5] 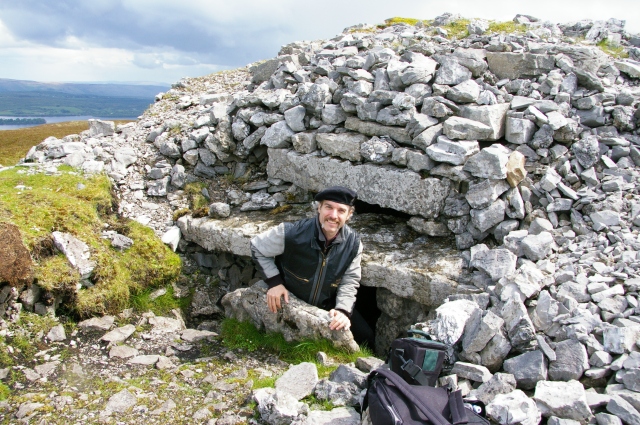 At the entrance to the passage ‘tomb’ or cairn on Carrowkeel ridge, County Sligo. Where myth and reality collide. Photo Sean Arthur Joyce

For me this was definitely not going to be a tour-bus vacation hitting all the tourism ‘hotspots,’ kissing the Blarney Stone and buying shamrock-festooned souvenirs. So I researched off-the-beaten-track tour guides and found John Willmott of Celtic Ways tours. Incredibly, his home is in Sligo County—serendipity again on the Hero’s Journey. John is a transplanted Brit who probably knows as much about Irish lore as many of the locals. Once I learned you can actually visit the sites mentioned in the Battles of Moytura, I was hooked! There’s the Heapstown cairn, a house-high pile of stones that was said to be the place where the Fir Bolg filled the magic well the De Danaan were using to heal their wounded at the end of each day’s battle. There’s the Lake of Balor’s Eye, which periodically and rather mysteriously empties out. Balor was a mythical one-eyed giant who fought for the Fomorians, who allied themselves with the Fir Bolg after their defeat at the First Battle of Moytura. Balor was said to have a ‘baleful eye’ that destroyed anything or anyone in its path, like a laser beam. This time the De Danaan hero was Lugh, who used a magical spear to pierce Balor’s eye. The eye was said to have fallen out the back of his head and created a deep hole in the earth that later filled with water to become the Lake of Balor’s Eye.[6] You can visit it today in Sligo. John Willmott joked that the lake had emptied out twice in living memory—once when Hitler came to power and again when George Bush senior became president of the United States.

John also took me to the high ridge overlooking Lough Arrow (‘lough’ is an Irish Gaelic word meaning lake, similar to the Scots ‘loch’) where there are the remains of several ancient ‘burial’ cairns at Carrowkeel, dating back some 3,000 years. These are built to the same plan as the giant stone mound at Newgrange, although on a much smaller scale. Sadly the Irish government has allowed the Lough Arrow cairns to deteriorate with time. Meanwhile thousands of people visit Newgrange every year. Thousands more bid ridiculous prices to be allowed into the mound when winter solstice sunrise sluices its rays all the way back to the inner chamber—one day a year. As Anne said, the interior floor plan—a long narrow passageway leading to a central chamber with two smaller side chambers—could easily be a figurative representation of a womb. The sun being the ancient symbol of male fertility, it fits well with the fact that the ancient designers of Newgrange aligned it perfectly to the rays of the winter solstice. One of the cairns at Carrowkeel is said to be the ‘burial mound’ of Irish warrior-goddess The Morrigan, a shapeshifter often taking the form of a crow. The Morrigan fought Cuchulainn, the hero of the Ulster mythic cycle, later becoming his ally. She was often seen as a portent of evil tidings, just as crows are in European mythology due to their presence at battlefields or during plagues. 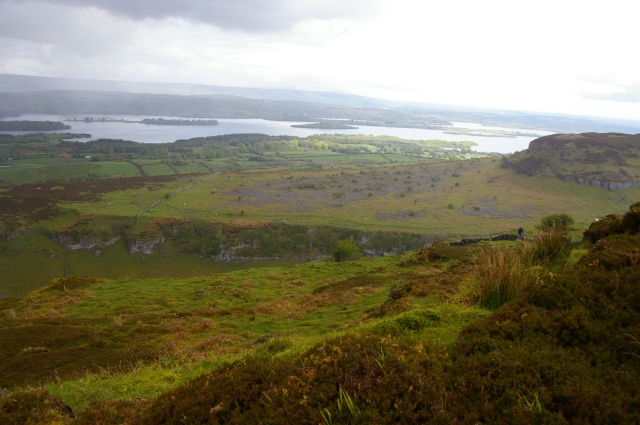 It was a breathtaking experience for a poet with an excitable imagination. Standing high up on Carrowkeel, sifted by its stiff winds, it wasn’t hard for me to picture the two armies massing below. Adding to the impression, I crawled inside one of the mounds and looked out over the valley through its entrance portal, where the sun’s rays pour in at summer solstice. The ‘Aha!’ moment came when I realized just how alive with myth, song and story the Irish landscape is. Every field, every lake, stream, or holy well has a story or a song. It woke me up to the fact that as a Canadian—or at least, as a Western Canadian—I had inhabited a ‘blank’ landscape, a landscape devoid of story. This spoke to the bankruptcy of my public school education, which in the 1960s and ’70s pretended that First Nations history and mythology didn’t exist. So naturally, we didn’t know their stories on the landscape. And because people of British and European descent are newcomers here, we had yet to layer our own mythology over the landscape the way such accretion of stories has occurred in England, Ireland, Wales and Scotland over the millennia.

Suddenly what Campbell called ‘the power of myth’ became very real and immediate to me. I was literally breathing the same air as the ancient bards who recorded these stories, standing on their ground. As Chief Seattle said of his people on the landscape: “We know the sap which courses through the trees as we know the blood that courses through our veins. The shining water that moves in the streams and rivers is not just water, but the blood of our ancestors.”[7] Our precursors on the Canadian landscape—our First Nations—had this sensibility well embedded in their cultures long before we arrived.

Thankfully our Canadian writers have done a fabulous job of bringing First Nations stories to the attention of the reading public, starting with the first wave of mostly Caucasian writers—notably Robert Bringhurst and Anne Cameron on the west coast—and now the rising empowerment of First Nations and Métis writers reaching a mass audience—poet Gary Gottfriedson and novelist Thomas King, to name only two. Ethnologists also played their role—albeit a controversial one—in the preservation of North American native cultural narratives. Naturally some distortion occurs when native stories are focused through another cultural lens. But to look on the bright side, at least it saved many such stories from oblivion, especially in cultures that had nearly been wiped out by disease or attempted genocide. Books such as Black Elk Speaks by John Neihardt, The World’s Rim by Hartley Burr Alexander, and The Gift of the Gila Monster: Navajo Ceremonial Tales by Gerald Hausman are thus invaluable, if imperfect. It was rare during the centuries of their disempowerment by the dominant white culture for native writers to have a voice. Which is what makes the rare occurrences, like the writings of Zitkala-sa, of the Sioux nation, and Beverly Hungry Wolf of the Blackfoot nation (The Ways of My Grandmothers), all the more remarkable.

I am a poet, journalist and author with a strong commitment to the environment and social justice. If anything, I have too many interests and too little time in a day to pursue them all. Film, poetry, literature, music, mythology, and history probably top the list. My musical interests lie firmly in rock and blues with a smattering of folk and world music. I consider myself lucky to have lived during the great flowering of modern rock music during its Golden Age in the late 1960s/early '70s. In poetry my major inspirations are Dylan Thomas, Rilke, Neruda and the early 20th century British/American poets: Auden, Eliot, Cummings. My preferred cinema includes the great French auteurs, Kirosawa, Orson Welles, and Film Noir. My preferred social causes are too numerous to mention but include banning GMOs, eliminating poverty (ha-ha), and a sane approach to forest conservation and resource extraction. Wish me—wish us all—luck on that one!
View all posts by seanarthurjoyce →
This entry was posted in mythology and tagged Anne Cameron, Anne Champagne, Battle of Moytura, Christopher Vogler, De Danaan, Fir Bolg, Hero's Journey, John Neihardt, John Willmott, Joseph Campbell, Labor Gabala Erenn, Lough Arrow, mythology, Newgrange, Sligo County, Tennyson, The Book of Invasions, The Morrigan, Yeats. Bookmark the permalink.