A Paradigm Shift for Halloween

Posted on October 26, 2015 by seanarthurjoyce

It’s time to stop demonizing Halloween. No longer should it be open season on witches, black cats and the spirits of the dead. Nor does it need to be a time where fear of death is transmuted into a commercial bonanza for corporations selling candy, costumes and related paraphernalia. Its ancient origins provide a much deeper, more profound well to draw upon. With harvest season ended, we teeter on the cusp of coming winter, that most elegant living metaphor for death and the underworld. Historically cultures have seen this as a liminal time, when the veil between the living and the dead is at its thinnest. And while many Asian and aboriginal cultures have a strong tradition of ancestor veneration, the Christian West has downplayed this element. The Siksika Blackfeet, according to Dr. Duncan Grady, see the ancestral realm as living side by side with our own and occasionally reaching across the veil to assist or instruct. 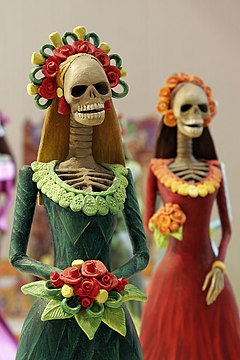 Day of the Dead celebrations have a long provenance in human culture as a means of releasing our most primal of fears. At their most elegant, as in Mexican Day of the Dead fiestas, they foster a psychic reversal, from fear to celebration. The same happens in the best art, which juxtaposes light versus dark elements in the psyche, seeking balance. As J. Edward Chamberlin explains in If This is Your Land, Where Are Your Stories? it’s the reason why we’re perennially drawn to musical forms like the blues. Noting that some of the most popular songs during the Great Depression were stories of loss and tragedy, Chamberlin cites a broad cross-section of similar instances in culture. “All of these songs… pick you up on your way down. They put you back together by telling you what it’s like to be broken apart. They make you feel better by making you feel bad.” [1] Arguably the same principle is at work in All Hallow’s Eve and Day of the Dead celebrations. Instead of our usual tactic of avoidance, these spectacles force us to confront—and hopefully dissipate—our most primal fear. “Although we may feel hopelessly caught between death and resurrection, somewhere in us we know that the cold grip of winter will eventually give way to the warm flow of spring, that no matter how overwhelming our grief or how intense our sorrow it will eventually give way to grace, if only the grace of numbness or exhaustion.” [2]

We’re well into a new century and when you look at history, often a new century ushers in paradigm shifts. Whether that comes from the latest scientific discoveries or the collective consciousness or both, it’s humanity’s way of moving forward. The concept of social evolution is arguable depending on your sociopolitical views. It’s often more like a game of snakes and ladders than a straight line of forward momentum—two steps forward and three steps back. Or two steps forward and five steps backward, depending on your degree of cynicism. Probably it’s safe to say that human progress is incremental, spread across an evolutionary and temporal scale that’s simply beyond the scope of an individual human life. But every once in awhile, by a lucky accident of birth and timing, you find yourself poised on the cusp of societal change. Canadians are hopeful that such a moment has come—quite unexpectedly—with the election of Justin Trudeau as Prime Minister. Time will tell. One thing was crystal clear: the message resoundingly sent to outgoing Prime Minister Harper and his corrupt gang of right-wing Neanderthals: “Enough of you, already!”

Political, religious, historical and social phenomena cast long shadows through a process known as epigenetics, the influence of social and physical environment on the expression of genes. And the way we’ve celebrated Halloween in recent history is evidence we’re still coming out of Christianity’s shadow. Clever strategists all, the architects of early corporate Christianity learned quickly the most effective way to colonize the Old Ways. Persecuting pagans—especially the feisty, combative Celts and Teutons—was unlikely to gain much traction. Such a heavy-handed approach was likely only to inspire resistance movements. Instead, Christendom’s politically savvy foot soldiers such as St. Patrick simply grafted the new over the old, building churches on ancient temple sites, co-opting sacred wells used for thousands of years, and rebranding age-old ceremonies and celebrations, from Easter to Halloween to Christmas. I saw this most graphically while visiting Tobernalt Well in Sligo County, Ireland. This amazing place in a lush grove of trees featured both the Catholic Stations of the Cross and a ‘clootie tree’ festooned with strips of cloth and other prayer offerings, an ancient ‘pagan’ practice that predates Christianity. As we were walking in, an Irish Catholic woman was just completing her devotions and suddenly fell on the moist stones, bruising her knee. It was perhaps symbolic of Christianity’s slipping grip on our consciousness in the 21st century.

The very term ‘pagan’ itself is an invention of Christianity, “a term that developed among the Christian community of southern Europe during late antiquity to describe religions other than their own, Judaism, or Islam, the three Abrahamic religions. Throughout Christendom it continued to be used, typically in a derogatory sense.” [3] As the Wikipedia article notes, the term was re-adopted and repurposed by self-described ‘pagans’ in the 19th and 20th centuries as a badge of honour rather than shame. “The adoption of paganus by the Latin Christians as an all-embracing, pejorative term for polytheists represents an unforeseen and singularly long-lasting victory, within a religious group, of a word of Latin slang originally devoid of religious meaning,” explains Peter Brown, Emeritus Professor of History at Princeton University. “The evolution occurred only in the Latin west, and in connection with the Latin church. Elsewhere, ‘Hellene’ or ‘gentile’ (ethnikos) remained the word for pagan; and paganos continued as a purely secular term, with overtones of the inferior and the commonplace.” [4]

Possibly the most direct historical connection between Halloween is with the Celtic festival of Samhain (pronounced ‘Sow-in’). It’s the liminal threshold between autumn and winter, when the veil that separates worlds is at its thinnest. According to historian Nicholas Rogers, while “some folklorists have detected its origins in the Roman feast of Pomona, the goddess of fruits and seeds, or in the festival of the dead called Parentalia, it is more typically linked to the Celtic festival of Samhain,” which comes from the Old Irish for “summer’s end.” Samhain/Calan Gaeaf marked the end of the harvest season and beginning of winter or the ‘darker half’ of the year.”[5] Many commentators besides Rogers have noted the debt owed to Celtic culture for the evolution of Halloween. “Like Beltane/Calan Mai, it was seen as a liminal time, when the boundary between this world and the Otherworld thinned. This meant the Aos Sí (pronounced ees shee), the ‘spirits’ or ‘fairies,’ could more easily come into our world and were particularly active.” [6]

“At Samhain, it was believed that the Aos Sí needed to be propitiated to ensure that the people and their livestock survived the winter. Offerings of food and drink, or portions of the crops, were left outside for the Aos Sí. The souls of the dead were also said to revisit their homes seeking hospitality. Places were set at the dinner table and by the fire to welcome them.” [7] There are wonderful examples of such fairy visitations in W.B. Yeats’ collection Irish Fairy and Folk Tales. The emphasis in these stories is less on sensationalistic fright or gore and more on recognition of the vital role ancestral spirits play in our lives, and the need to show due respect.

Whatever our belief in the afterworld or lack thereof, there’s something to be gained by the deeper, broader context this gives us. The problem with commercialized celebrations is that they typically keep us skating across the surface of the event, subverting the ritual purpose for which it was formed. While I would never advocate for superstition, I think such a narrow reading of such ritual events robs us of much spiritual richness. As Chamberlin so eloquently argues in his book, it’s not a case of either/or—it’s either true or it isn’t—but both/and. It’s both true and not true, believe it and not, “it was and it was not,” as the Majorca storytellers begin their tales, Chamberlin writes. [8] This puts us at the very heart of the paradox that governs our lives: we live with a consciousness that can conceive of no end, yet by its nature will inevitably come to an end. At least, in corporal form. Yet our spirits live on in poem, painting, sculpture, song and story. This is what makes art, poetry and storytelling so vital—they help us both reconcile these paradoxes and transcend them.

Remember that the next time your political candidate tells you arts funding is “unnecessary.”

I am a poet, journalist and author with a strong commitment to the environment and social justice. If anything, I have too many interests and too little time in a day to pursue them all. Film, poetry, literature, music, mythology, and history probably top the list. My musical interests lie firmly in rock and blues with a smattering of folk and world music. I consider myself lucky to have lived during the great flowering of modern rock music during its Golden Age in the late 1960s/early '70s. In poetry my major inspirations are Dylan Thomas, Rilke, Neruda and the early 20th century British/American poets: Auden, Eliot, Cummings. My preferred cinema includes the great French auteurs, Kirosawa, Orson Welles, and Film Noir. My preferred social causes are too numerous to mention but include banning GMOs, eliminating poverty (ha-ha), and a sane approach to forest conservation and resource extraction. Wish me—wish us all—luck on that one!
View all posts by seanarthurjoyce →
This entry was posted in History, mythology and tagged civilization, Day of the Dead, Halloween origins, history, mythology, Samhain, social commentary. Bookmark the permalink.