A Mother’s Day Story–Mama Duck Gets a Helping Hand

Posted on May 8, 2016 by seanarthurjoyce

This year my mother has not had the best of Mother’s Days. After suffering from chronic bronchitis that progressed to pneumonia, followed by fluid on the heart that caused a heart attack, she was rushed to Williams Lake hospital. It was determined that she needed to be air ambulanced to the Kelowna hospital, where they have the best cardiology wing in the BC interior and she could receive a full range of diagnostic tests. Anne and I had to quickly arrange to have our garden looked after, pack up the car and head off from our home in New Denver to Kelowna on the afternoon of May 3. It took them another day to finally get Mom to Kelowna and since then we’ve been at the hospital every day keeping her company.

Although Mom and I have never been close, it’s still a deep shock to see a parent in such a diminished condition, her dignity so battered down, her health so suddenly frail. As our friend Judy said, she’s your mother—the connection is visceral, beyond any other emotional considerations and personal history. Her breathing is laboured and she barely has the strength to lift herself back onto her hospital bed. Because she’s been suffering oxygen depletion from the pressure on her lungs, she’s not entirely lucid and often gets confused. This from someone who was always a very strong personality. Just a few years ago she chased off potential thieves on their ranch property with a shotgun! So seeing her phasing in and out of lucidity is particularly hard for me, as for myself I value my mental clarity and capacities above all else. And in the midst of an already challenging medical crisis it makes it hard to separate Mom’s reality from what is just another symptom of her illness.

After Anne and I got back from the hospital just before dinnertime on May 7, we were chatting with our hosts Keith and Judy on the front porch when we noticed a mother duck and her brood of ducklings come waddling through the yard. She seemed a little disoriented but it was immediately clear she was headed toward Okanagan Lake, which is only about three blocks distant from Keith and Judy’s place. However, as it is a busy residential neighbourhood with many fenced yards, people on bikes, driving cars, and walking dogs, I felt I should follow her to make sure she made it safely to the water.

Keith and Judy’s cross street is a dead end so poor Mama Duck found herself in someone’s backyard, confused about how to get out. I opened the gate and then realized I’d have to act as a shepherd to get her headed in the right direction. If I got too close she made a defensive posture and opened her beak as if to hiss at me, though she made no sound. I kept just far enough away so as not to scare her but close enough to herd her away from going down a dead end street or getting stuck in another fenced yard. Along the way people would smile and comment on the situation. 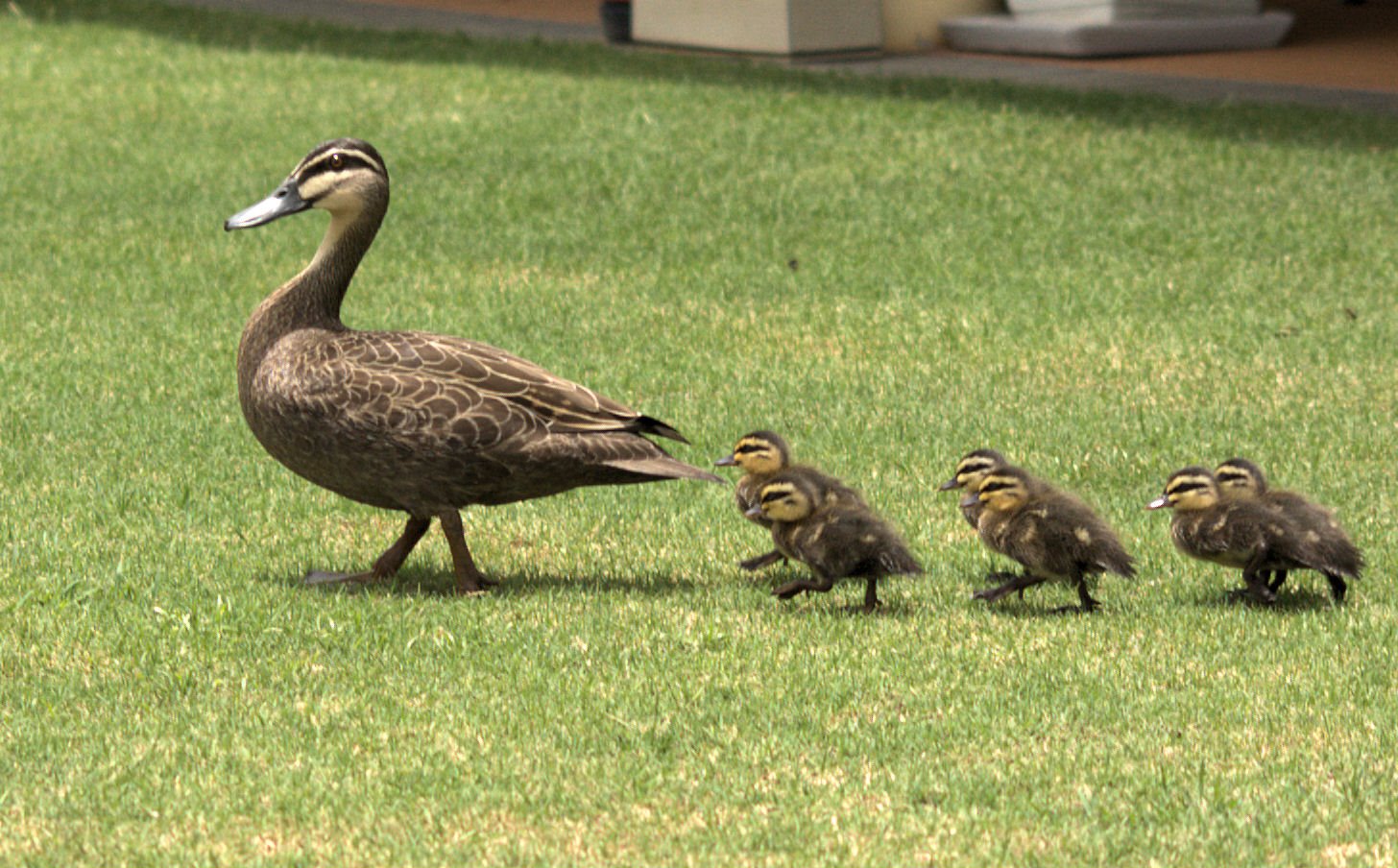 This scene is very much the one I observed as I acted as Mama Duck’s unofficial herder. Courtesy Wikimedia.

I managed to get her herded onto the main street that heads toward the lake but about half a block along she made a left turn into a rather lush looking yard at another of the lovely heritage homes in this neighbourhood. An older woman was on the porch with her iPad so I explained why I was coming into her yard and she immediately helped gently herd the Mama and her nine ducklings back toward the street, as again there was no other way out of the yard. The woman gave me directions for the shortest route to the water. I used those to continue herding the ducks in that direction.

Then in the next block a male mallard appeared, and decided he wanted to have at ‘er with poor Mama Duck. “Hey, honey, let’s get it on!” Of course she was having none of it but there was a few minutes of tense drama while he chased her in circles through the air. Somehow she managed to finally get through to him: “Look, I’ve got nine little ones already. I’m in no mood.” I was worried it could end badly, and kept an eye on the temporarily stranded ducklings. Another neighbour watched this drama play out as I explained to him my role in it.

So on they went. I had to keep to the street side of the ducky procession because drivers in this town have a habit of behaving as if they’re on the Indy 500 with their expensive cars (Kelowna is after all a kind of Beverly Hills North). I had to flag one driver to the fact that he needed to pay attention to the ducks and slow down. Another neighbour shouted helpful directions toward the lake.

The last main cross street before the lakefront is another busy street, with walkers, cyclists, more racing drivers, and even the occasional rollerblader. Luckily there was a lull in traffic as Mama and her brood crossed but then she seemed to want to continue along that street in the wrong direction. I blocked her, forcing her to go the right way again. She slipped under a tall cedar hedge and I could no longer track her. I walked along the sidewalk of the property, one of Kelowna’s rich houses, complete with iron gates, but couldn’t see them anymore. However, as it was the last property before the beach, and indeed has private beachfront, I figured Mama would be able to take it from there.

On the way back I met the lady in the heritage house on her front porch again, who wanted to know how they made out. She said, “Well, you’ve certainly earned yourself a nice glass of wine.” Back at our home away from home, Keith and Judy said, “You’ve done your bit for the environment today!”

Ah, the bond between mother and baby duck…

It was a lovely interlude in an otherwise deeply stressful time. I’m sure a biologist would tell me that to the mother duck, I was just another potential danger to be overcome in her odyssey toward the lake. But being the romantic I am, I can’t help but hope that Mama Duck remembers a tall stranger in a straw hat and red summer shirt who helped shepherd her and her babies to safety on the water.

I am a poet, journalist and author with a strong commitment to the environment and social justice. If anything, I have too many interests and too little time in a day to pursue them all. Film, poetry, literature, music, mythology, and history probably top the list. My musical interests lie firmly in rock and blues with a smattering of folk and world music. I consider myself lucky to have lived during the great flowering of modern rock music during its Golden Age in the late 1960s/early '70s. In poetry my major inspirations are Dylan Thomas, Rilke, Neruda and the early 20th century British/American poets: Auden, Eliot, Cummings. My preferred cinema includes the great French auteurs, Kirosawa, Orson Welles, and Film Noir. My preferred social causes are too numerous to mention but include banning GMOs, eliminating poverty (ha-ha), and a sane approach to forest conservation and resource extraction. Wish me—wish us all—luck on that one!
View all posts by seanarthurjoyce →
This entry was posted in environment, Nature and tagged empathy, environment, mother duck and ducklngs, Mother's Day, nature. Bookmark the permalink.