Nakusp Medieval Days a blast from the past

Turns out there’s far more going on at Nakusp Medieval Days than just an exercise in nostalgia. Far more than merely a forum for staged battles, the festival boasts a wide array of revived ancient skills. Although numbers were down slightly this year, Daniel Abraham, Nakusp Medieval Society (NMS) president, says the event was a success. Judging by the delight I saw on the faces of young and old watching ‘sword’ combat, archery skills, Highland games, and jousting matches with competing ‘knights,’ I’d have to agree.

The partnership this year with the NMS and the Society for Creative Anachronism (SCA) was a first for both organizations. The SCA was established some 50 years ago and represents “over 1,000 years of history from pre-17th century Europe and the cultures that influenced Europe.” For those new to this event, a little explanation helps. “Participants in the SCA develop a persona which represents an individual from the Middle Ages who might have existed (but not based on a real figure from that time…) For most SCA participants this means selecting a particular time and culture from the Middle Ages, building a name from documented historical records from that culture, and wearing clothing that someone from that culture would have worn.” And indeed, it’s this colourful array of costumed characters that helps create the unique allure of Medieval Days.

The Jousting Alliance of Washington State brought in fully armoured ‘knights’ competing with lances on horseback – another first for Nakusp Medieval Days. The event featured a ‘page’ or announcer who goaded the audience to cheer for just about any competitor besides the Black Knight, who delighted in taunting both his competitors and the audience. For safety the lances are designed to shatter on impact, but this is not a sport without risk. The female Green Knight, Ariana Wolf, sustained a slight injury at Saturday’s match when a lance deflected off her shoulder armour and caused a bruise on her cheek. Nakusp resident Richard Sahlman was ‘knighted’ for coming to their assistance when he drove to the border to tow a horse trailer when one of the jouster’s trucks broke down. The crowds loved it. 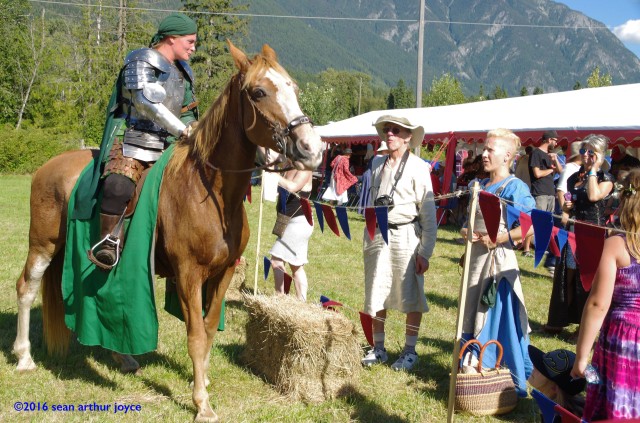 The war on Saturday pitched the principality of Tir-Righ, comprising BC and part of Washington, and Avocal, the kingdom to the east, comprising Alberta, Saskatchewan and part of Idaho. Contestants compete for ‘war points’ at various events throughout the year that can determine who rises to the position of royalty in the kingdom. Sunday’s Highland Games featured a half-dozen kilt-clad competitors displaying feats of strength and agility with such sports as the shot putt and caber tossing.

In an era when we’re accustomed to seeing everything from thumbtacks to iPads made in China or Malaysia, the merchants at Medieval Days are more artisans than mere retailers. William Litwin, a.k.a. Taliesin ap Hafgan, specializes in calligraphy, and explained the painstaking process he uses to create ink from black walnut, among other sources for his inks. His partner Christopher ‘Topher’ Mackenzie creates chain mail as well as being a spinner and weaver. Kimberley Grigg, a.k.a. Duchess Meaghan, hosted a sewing and weaving circle teaching young women her skills, including Norse knotwork (nálbinding) that predates modern knitting by some 2,000 years. Stuart Tringle and Aleyn Wyckington displayed handcrafted medieval period lyres and encouraged festival patrons to try them out. Metal artists displayed handcrafted armour for sale and there were blacksmithing demonstrations from Nelson’s Kootenay Arts Studio. Leather workers such as Vargas Hides and Dyes happily take commissions for armour or belts and pouches made to last. Someone at the festival was the lucky raffle winner of a handcrafted longbow by Kootenay artisan Clark Dennill. A medieval-style furniture maker came all the way from Denver, Colorado with his wife, who displayed a beautiful tapestry-in-progress. The festival also teamed up with Nakusp Secondary to create swords for sale to would-be knights. 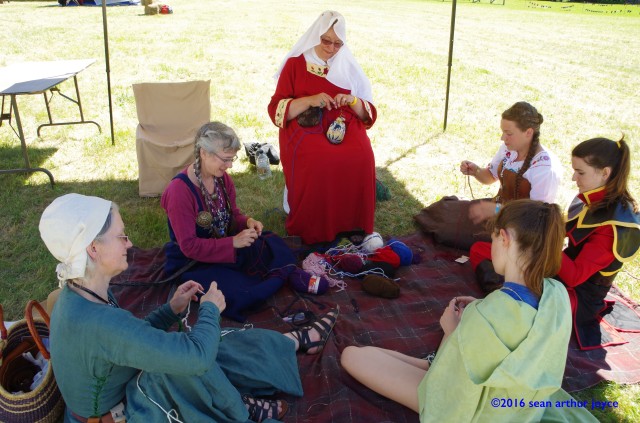 “We recognize that there’s a lot of traditional handcrafted arts around here,” says Abraham, “so we thought one way to promote tourism is to give them a chance to promote their wares at our festival. Last year we had 28 vendors but this year we had about a third more. We try to keep things as local as possible, as relevant as possible.” 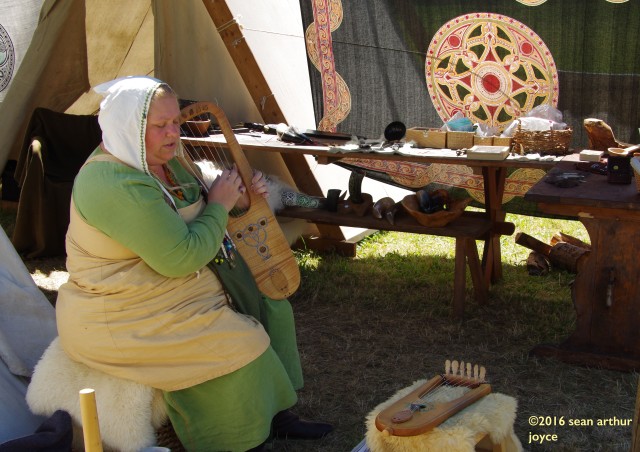 The food and beverage department was a blend of ancient and modern. A bakery vendor sold both traditional and gluten-free goodies. A big hit was the tent offering ‘Irish-style’ whiskey (only whiskey made in Ireland can be called ‘Irish whiskey’). Award-winning Kootenay Craft Distillery was there with their regular and flavoured vodkas. The Burton City Cidery offered a distinctly medieval touch to its high-test ciders. The festival tavern sold out of everything they ordered. “Last year we were a little more strict on the food, that it had to be medieval food,” says Abraham, “but we had only two vendors and they sold out fast. So this year we thought, we can sacrifice authenticity to keep peoples’ bellies full. And it worked.” 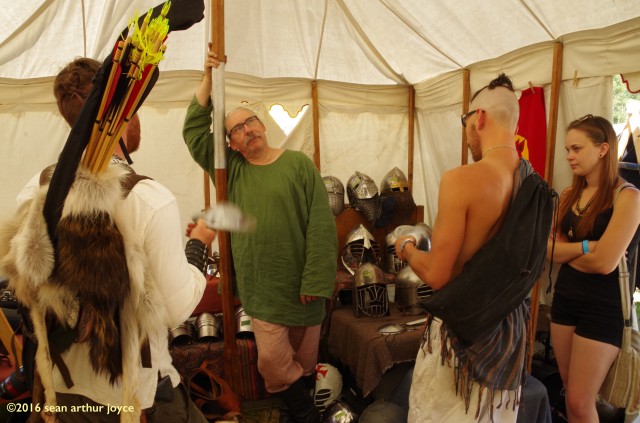 Haggling with a merchant at the armoury shop. Photo Sean Arthur Joyce

The festival closed around 6 pm each day, making it both a family-friendly and easy on the neighbours. Look for another exciting event at next year’s Medieval Days. For more information visit www.medievaldays.ca or www.sca.org.

I am a poet, journalist and author with a strong commitment to the environment and social justice. If anything, I have too many interests and too little time in a day to pursue them all. Film, poetry, literature, music, mythology, and history probably top the list. My musical interests lie firmly in rock and blues with a smattering of folk and world music. I consider myself lucky to have lived during the great flowering of modern rock music during its Golden Age in the late 1960s/early '70s. In poetry my major inspirations are Dylan Thomas, Rilke, Neruda and the early 20th century British/American poets: Auden, Eliot, Cummings. My preferred cinema includes the great French auteurs, Kirosawa, Orson Welles, and Film Noir. My preferred social causes are too numerous to mention but include banning GMOs, eliminating poverty (ha-ha), and a sane approach to forest conservation and resource extraction. Wish me—wish us all—luck on that one!
View all posts by seanarthurjoyce →
This entry was posted in Arts & Culture, Slocan Valley, The Kootenays and tagged creativity, Middle Ages culture, Nakusp Medieval Days, Society for Creative Anachronism, the kootenays. Bookmark the permalink.