Posted on February 7, 2017 by seanarthurjoyce

Well, they came, and they rocked. The 25th anniversary of the Winter Blues Boogie in Silverton (Saturday, February 4) delivered another great evening of booty-shaking rock and blues. The evening was notable for the reunion of the original line-up of Dr. Fun and the Nightcrawlers, a mainstay of the event during its quarter century. Although the band ‘officially’ retired in 2008, Gary Gilbert (‘Dr. Fun’) and bandmates showed up again in 2014 and 2016 to rock the joint.

“And all of them still alive, some more than others,” quips organizer Dick Callison. “They were just on cloud nine last night.” 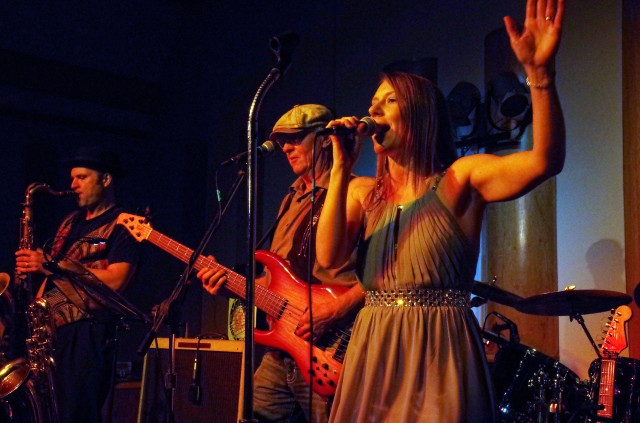 In response to complaints about overcrowding on the dance floor, 80 fewer tickets were printed this year. The effect was noticeable, with less of the bumper derby effect of past years. Tickets were put on sale the first week of December and were sold out by the 15th of that month, all without publicity. “By the time it was time to submit an article to the Valley Voice the tickets were gone,” says Callison. “We printed 40 posters early this year but before we could get them put up the tickets were gone.” Callison and co-organizer Barb Yeomans keep an email list of about 120 people and send out alerts before advertising goes out.

Due to the heavy snowfall, some ticket holders weren’t able to make it, leaving Callison with about eight tickets to re-sell the night of the Boogie. Although Highway 6 remained open, there were extreme weather warnings across the province, with an accumulation of up to 70 centimetres predicted over the weekend in some areas. Meteorologists are calling it one of the most significant snowfalls to hit BC in February history. But braving the elements has become as much of a tradition for Winter Blues Boogie as shakin’ yer booty. Boogie patrons over the years have had to endure landslides, power outages and of course extreme weather. Just last year a snowslide briefly closed the highway between Silverton and New Denver. This year one man drove all the way from California to be here.

But enough about weather. Holly Hyatt and Friends came on for the first set. It was great to see Holly so relaxed and happy now as a performer and at the same time really belting it out. And looking fabulous all the while. The ‘Friends’ turned out to be Jon Burden properly giving the fretboard the 12-bar strut and some mean, ripping leads. The rhythm section was the ‘old reliable’ rhythm engine of No Excuse: Bill Wilson on drums and Kenny Turner on five-string bass. And let’s not forget the inimitable Clint Swanson on sax, as usual blowing magic through those brass keys. In places it was a bit rough; Burden confessed they’d only had time for a couple of rehearsals. But in the main it was a rollicking great opening set that had the dance floor packed from the very first song.

What can you say about Dr. Fun and the Nightcrawlers anymore after 25 years? These guys never let you down—always entertaining, always energetic, and with an evolving mix of songs that weave seamlessly through two dance-licious sets. Just like Holly Hyatt, Dr. Fun’s gang had ‘em shakin’ their hips from the first chord. Gary Gilbert came on decked in his trademark shades, nattily dressed as usual, and the boys soon launched into a raucous cover of Talking Heads’ classic Life During Wartime. They nailed it. Talk about dancing on the ashes of the apocalypse to the south of us. I must admit I miss their Allman Brothers streak, but that’s just my love of a screaming electric slide guitar, Duane Allman-style. I’ve seen these guys do an extended Allman Bros. jam and do it justice damn straight. They also did a fast blues shuffle version of Leonard Cohen’s I’m Your Man, often considered the choice of cool cats in the music world. It’s a bit odd to hear it done that way, probably because without the man himself singing it it’s a reminder of the Great Voice we’ve lost. Of all the Great Voices we’ve lost the past year. But nobody thought of that. They just boogied. And boogied. And boogied.

The only sour note came from a sound mix that occasionally had instruments buried in the mix, repeated squeals of feedback, monitor problems, and other issues. The horn section was particularly hard hit, with Crispin Elder’s honeyed sax tones all but drowned. That didn’t change the fact that Winter Blues Boogie is the Doctor’s best cure for those dreaded January Blues, when it’s not hard to find yourself drained to a grey shadow. Shakin’ a leg is one of Nature’s great remedies. Callison is fond of saying how he’s always loved looking out at the audience and seeing all the smiling faces. Many of them are faces that return year after year, making it almost a family reunion – getting older but staying perennially young at heart.

Dr. Fun and the Nightcrawlers aren’t being let off the hook to enjoy their pension cheques just yet. They’ve been hired to perform at this year’s Cannafest in Grand Forks, BC, a rock music festival dedicated in part to raising awareness of the medicinal benefits of cannabis. “So they may be back in business,” says Callison. “They all seem kind of pumped to do that gig.” The Nightcrawlers will share the bill with Canadian classic rock artists Randy Bachman, Loverboy, April Wine, Harlequin, Trooper, Platinum Blonde and prog rockers Saga—a much underrated band who are ironically more popular in Europe than here at home.

I am a poet, journalist and author with a strong commitment to the environment and social justice. If anything, I have too many interests and too little time in a day to pursue them all. Film, poetry, literature, music, mythology, and history probably top the list. My musical interests lie firmly in rock and blues with a smattering of folk and world music. I consider myself lucky to have lived during the great flowering of modern rock music during its Golden Age in the late 1960s/early '70s. In poetry my major inspirations are Dylan Thomas, Rilke, Neruda and the early 20th century British/American poets: Auden, Eliot, Cummings. My preferred cinema includes the great French auteurs, Kirosawa, Orson Welles, and Film Noir. My preferred social causes are too numerous to mention but include banning GMOs, eliminating poverty (ha-ha), and a sane approach to forest conservation and resource extraction. Wish me—wish us all—luck on that one!
View all posts by seanarthurjoyce →
This entry was posted in blues, blues boogie, Music, Rock 'n Roll and tagged music, rock, the blues, the kootenays, Winter Blues Boogie. Bookmark the permalink.