Posted on February 23, 2017 by seanarthurjoyce

Long hours of drudgery: From the image on the 2010 Canada Post stamp. Image: Library and Archives Canada

It happened so quickly most Members of Parliament were barely aware of it. On February 15 a Private Member’s motion brought forward by Bloc Québécois MP Luc Thériault was passed. The motion calls for the House of Commons to apologize to the families of the British Home Children brought to Canada to work as indentured labourers on Canadian farms during the late 19th and early 20th centuries. The text of the motion reads:

“That the House recognize the injustice, abuse and suffering endured by the British Home Children as well as the efforts, participation and contribution of these children and their descendants within our communities; and offer its sincere apology to the former British Home Children who are still living and to the descendants of these 100,000 individuals who were shipped from Great Britain to Canada between 1869 and 1948, and torn from their families to serve mainly as cheap labour once they arrived in Canada.” 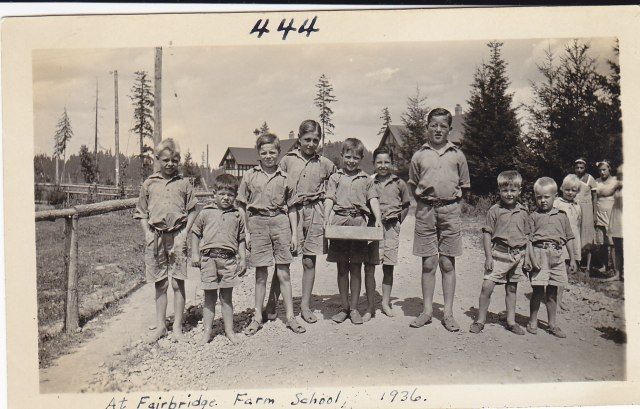 First group of Fairbridge boys at the Prince of Wales Farm School, Duncan, BC, 1936. Note how young some of the boys are. Photo courtesy Ron Smith / Fairbridge Chapel Society

The manner in which the motion was so suddenly adopted speaks to the often-convoluted political process on Parliament Hill. Working with former Bloc Québécois leader Gilles Duceppe, Thériault was able to do something of an end-run around the usual process for getting Private Member’s legislation passed. By gaining the support of the four House parties, the motion received unanimous assent and passed quickly in the House. Thériault had been lobbied by Sandra Joyce, who formed the advocacy group British Home Child Group International, and has been an ardent supporter and worker for the apology cause. The four party MPs who agreed to the motion were Judy Sgro, Liberal (Humber River-Black Creek); Mark Strahl, Conservative (Chilliwack-Hope); Jenny Kwan, NDP (Vancouver East); and Elizabeth May, Green (Saanich-Gulf Islands). 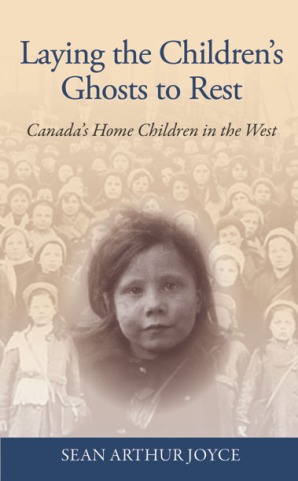 The apology motion is the result of years of educating the public about the much-neglected history of the British Home Children in Canada. Both Sandra Joyce and Lori Oschefski, CEO of the British Home Children Advocacy and Research Association, have been circulating apology petitions for several years now. While Alex Atamanenko was MP (NDP)[1] for the BC Southern Interior riding in which I live, he contacted me after reading my book, Laying the Children’s Ghosts to Rest, about drafting an apology motion. Although the resulting motion M-568 was brought forward in the House by Atamanenko, it failed to gain any traction with the Conservative dominated government under Prime Minister Harper. Indeed, while Jason Kenney held the post of Minister for Citizenship, Immigration and Multiculturalism in the Harper cabinet, he was quoted as saying: “Canadians don’t expect the government to apologize for every sad event in our history.”[2] Yet this sentiment apparently didn’t apply to PM Harper’s official apology to the former inmates of Native residential schools. That long-awaited apology was issued on June 11, 2008.[3]

When Atamanenko retired, the riding had been re-drawn, bringing into it two vastly different regions of BC—the West Kootenay and South Okanagan. The new riding, South Okanagan-West Kootenay, was probably an attempt to skew the vote toward a Conservative victory. It failed. NDP candidate Richard Cannings was easily elected for the riding in the 2015 federal election. One of his first actions upon taking office was to contact me about re-presenting the motion, now designated M-51. It was presented by Cannings in the House along with two other Private Member’s motions on May 5, 2016.[4] 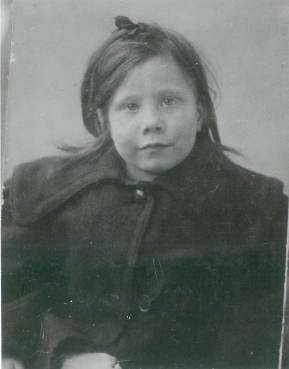 It remains to be seen whether the vote will lead to an official Government apology with full public ceremony. Although my understanding of Parliamentary procedure is weak, from what I’ve been told by Cannings, an apology in the House doesn’t necessarily mean the same thing as an official federal Government apology. To that end, Oschefsky and I are working to press the Government for a formal official apology ceremony with BHC families invited as special guests. Cannings contacted me by phone from Parliament Hill today to tell me that he’d managed to make the request in Question Period. We await the response of Prime Minister Justin Trudeau’s government, which so far has shown great sensitivity in matters of social justice. Within a month of being elected he was pressing Pope Francis for a Catholic apology to the First Nations people forced to endure residential schools run by the church.[5] This was followed in May 2016 with an apology for the 1914 Komagata Maru incident, in which “hundreds of Sikh, Muslim and Hindu passengers were denied entry to Canada and forced to return to an uncertain and ultimately violent fate in India.”[6]

There’s plenty of precedent for public apology ceremonies for the British Home Children in the official apologies offered by the British and Australian governments. When former Australian PM Kevin Rudd apologized on November 16, 2009, BHC families were invited to Parliament in Canberra, where he addressed them all from the platform in an hour-long ceremony.[7] It was very moving; in video footage you can see tears in the eyes of many faces.[8] Australian child migrants suffered disproportionately from sexual and physical abuse. Unlike Canadian child migrants, the Australians were mostly kept in institutions run by the Christian Brothers, a Catholic sect. They were brutally exploited for their labour, building roads, schools and other infrastructure.

For young men like Joe Harwood, Barnardo’s offer of a better life in Canada proved to be true. A typical photo taken upon entry at a Barnardo’s Home in England. Courtesy Bev Harwood.

Notably, PM Rudd did not limit his apology to sexual or physical abuse, but noted “the emotional starvation, the cold absence of love, tenderness and care.” He spoke of the “absolute tragedy of childhoods lost, childhoods spent instead in austere and institutional places, where names were replaced by numbers, spontaneous play by regimented routine, the joy of learning by the repetitive drudgery of menial work. And let us resolve today that this apology becomes a turning point in our national story… to do all in our power to never allow this to happen again.”

When former British Prime Minister Gordon Brown made his government’s official apology on February 24, 2010, Canadian and Australian BHCs were invited to London for a ceremony where the apology was given.[9] “Sixty survivors were flown to London so they could listen to the statement in person. Conservative leader David Cameron said the programme had been operated by all political parties and Mr. Brown’s apology was on behalf of ‘all of us,’” noted the BBC report. “The Child Migrant Trust said the significance of the apology was ‘immense.’ Director Margaret Humphreys said: ‘It gives them [the migrants] the recognition they have sought for so long—and, sadly, that so many have not lived to witness.’ …Until now, no British prime minister has ever delivered an official apology, despite repeated demands from victims’ groups.”[10] 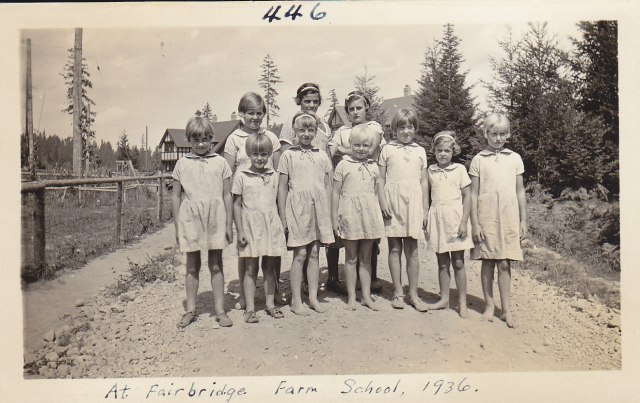 In my book I interviewed Patricia Skidmore, who was there with her mother Marjorie, who had been sent to Canada with Fairbridge Farm Schools in the 1940s.[11] Unfortunately PM Brown focused mostly on the Australian child emigrants, who were a fairly small number (7,000) compared to the 100,000 Canadian BHCs—some say as many as 120,000. There were federal government subsidies paid to the emigration agencies to bring the children here and our immigration officials worked closely with them. Sadly, Marjorie Skidmore did not live to hear of the apology motion just passed in Canadian Parliament. Skidmore died earlier this month.[12]

The author with Ivy Sucee at the George St. United Church in Peterborough. Ivy has been a tireless advocate for BHC families. Photo by Anne Champagne

In a sense it’s too bad Cannings’ motion wasn’t the one that was passed, since it was drafted to carefully include three essential points along with the call for an apology: that the federal Government should, “(b) express its gratitude and appreciation to the families whose ancestors were responsible for building up Canada’s agricultural industry at a critical early point in its development; (c) assist in a coordinated effort with survivors and descendants to track and record their genealogies and ensure that reunification with lost family members is made possible; and (d) take steps to ensure that all Canadians are informed about this important period of history in a way that makes certain it is never forgotten by present or future generations.”[13] 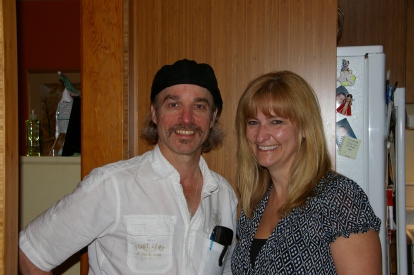 The author and Lori Oschefski in Peterborough. Lori has been a strong advocate for an official apology. Photo Anne Champagne

During my tour of Canada to promote Laying the Children’s Ghosts to Rest, I met BHC descendants at every reading. Many of them told me they’d learned nothing of their own family history until middle age or later, either from their own parents or from their public schooling. This pattern was typical in my research for the book. I met two young women working toward their master’s degrees in Canadian Studies and only one of them had heard of the British Home Children, and only briefly at that. This is at a university level of education! It would be like skipping completely over the chapter on the Riel Rebellion, or the Plains of Abraham. So clause D of our motion would have held the Government to account to remedy that huge oversight in the teaching of our nation’s history. But BHC advocates are nothing if not determined, so we may yet see integration of the topic into our school curriculum.

By no means is the call for an apology unanimous among BHC families; many are quite against it. Unlike the Australian experience, which was almost universally negative, many Canadian farm families treated their child migrants well, though very few were ever adopted. It’s important to note, however, that none of the Canadian initiatives have called for financial restitution. Atamanenko and Cannings’ motion merely calls for government assistance retrieving family records.

What matters, ultimately, is that this is a triumph for BHC families who felt that their ancestors were badly treated, neglected or abused. Everyone who has had a hand in the apology motion in whatever form deserves congratulations for a sense of civic duty that goes above and beyond the call.

NOTE: If you wish to support an official apology ceremony, please sign this petition: https://www.change.org/p/open-letter-to-the-right-honourable-prime-minister-trudeau

I am a poet, journalist and author with a strong commitment to the environment and social justice. If anything, I have too many interests and too little time in a day to pursue them all. Film, poetry, literature, music, mythology, and history probably top the list. My musical interests lie firmly in rock and blues with a smattering of folk and world music. I consider myself lucky to have lived during the great flowering of modern rock music during its Golden Age in the late 1960s/early '70s. In poetry my major inspirations are Dylan Thomas, Rilke, Neruda and the early 20th century British/American poets: Auden, Eliot, Cummings. My preferred cinema includes the great French auteurs, Kirosawa, Orson Welles, and Film Noir. My preferred social causes are too numerous to mention but include banning GMOs, eliminating poverty (ha-ha), and a sane approach to forest conservation and resource extraction. Wish me—wish us all—luck on that one!
View all posts by seanarthurjoyce →
This entry was posted in History, Home Children, News, politics and tagged Australian child migrants, Barnardo's, British Home Children, child labour, children, fairbridge farm schools, Gordon Brown apology, history, Justin Trudeau apologizes, Kevin Rudd apology, Laying the Children's Ghosts to Rest, politics, social justice. Bookmark the permalink.