Posted on April 3, 2017 by seanarthurjoyce

Just in time for National Poetry Month in April, a group of poets from Kaslo and area have released an anthology of their work titled Five Kootenay Lake Poets. The writers’ group, comprising Mark Mealing, Robert Banks Foster, Sheila Murray-Nellis, Anne Heard and Sheila Falle, have been meeting to workshop their verse since about 2004, inspired by a poetry workshop with Susan Andrews Grace.

The late great Chilean poet Pablo Neruda once said that, “my poetry was born between the hill and the river, it took its voice from the rain, and like the timber, it steeped itself in the forests.” Much the same could be said of these five poets, whose poems in this volume draw on the Kootenay landscape for theme and subject matter. Yet their scope goes far beyond that, drawing on literary influences from around the world.

Mark Mealing, who studied folklore and ethnopoetics at the University of Pennsylvania, became fascinated with First Nations lore, particularly the Coyote trickster myths. His book Coyote’s Running Here was published in 1980 by Pulp Press and the theme is continued here. Mealing, who is the minister of St. Andrew’s Anglican Church in Kaslo, has also studied classic Chinese verse forms and these metrics are transposed into English in several poems. Chinese poetry was typically written by aristocratic court poets who found themselves in exile for being on the wrong side of the politics of the day. Proving once again that well-crafted poetry never loses its social or political relevance, their poems of political corruption and chaos continue to resound through the ages. Mealing’s lines in Late Snow echo the classic Chinese poets and could have been written, not just of Trump’s presidency, but of any despotic ruler: “One ruler keeps his court leashed tight / and heaps sacrifices to greed and anger / his boot pressing the land and the people.”

Anne Heard’s poems hew closely to the Kootenay landscape she clearly loves, describing hikes into the Purcells, the Kaslo Community Garden, and other pastoral subjects. She deftly uses various poetic forms, including haiku (or as close as English can get to the original Japanese form), rhyming quatrains, or the more commonly used free verse. In To Carlyle Mountain Lodge, her interest in Kootenay history preserves a powerful memory:

caught in an avalanche

One unscathed to go for help, never to arrive or to return

The injured man, snowshoes on hands

Made it to Cody, pulling himself along the snow

Heard also delves into folklore with The Enchanted Flounder Prince Left a Streak of Blood, which uses the traditional pantoum form to create a kind of fairy tale mantra. Heard says she has “memorized and recited, read and written poetry from childhood on,” making her something of an endangered species these days. “Authors on my bedside table include Tom Wayman, Art Joyce, Joy Kagawa and Lorna Crozier.”

Robert Banks Foster was born in Victoria, BC but educated in both the US and Canada at the University of Victoria and Syracuse University. He was co-editor of the Canadian literary journal CV2 (Contemporary Verse) with legendary poet Dorothy Livesay. Foster weaves into his poems a deep environmental and social justice sensibility, with one suite, Water Sequence, inspired by the work of global water activist Maude Barlow: “Faith in the marketplace replaces many faiths. / All tears collected—the rushing river hits the rocks.” In his suite Glacial Going, a tribute to the Jumbo Requiem, his influences draw from a wide range of literature—Andrew Marvel, Aeschylus, William Dunbar and John Ralston Saul. The language is sparse yet precise in its evocation of glacial beauty, interspersed with quotes from these poets and authors. Far from merely flexing his intellectual muscle, these serve as a kind of chorus of voices from the history of literature. The poem foregrounds the reality of our global environmental crisis in powerfully compressed language: “The glacial tongue leaves a lake. / Ice faces vanish into the faces of the rocks.” Foster displays the poet’s skill in distilling social phenomena into a few lines: “The cosmeticians who teach us imperfection so they / can perfect us. / We belong to the land. / We are told to rape our mother.” 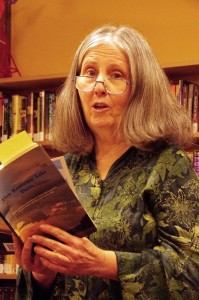 Sheila Murray-Nellis clearly got Aristotle’s memo that the command of metaphor is at the heart of poetic genius. Her poems are both an evocation of wilderness and a tribute to the creatures that inhabit it. I’m reminded of nature photographer Jim Lawrence’s breathtaking portraits of grizzlies, eagles, and other animals. In her poem The Wolf, this much-maligned creature “lifts his snout / to the wind’s ladder… asking his question…” This is poetry at its best, employing unique use of language to challenge our perceptions, make them new again. Wolf Cull, another pantoum, reminds us that our weapons are “more deadly than tooth and claw.” Yet her compassion extends to the human animal too, “the myriad ways we fall / and still… get up each day.” (Conversation) She grew up in New England, where she “enjoyed readings by many of the great American poets.” She has twice won first prize in the Kootenay Literary Competition (2012 and 2012), giving her the confidence to publish a collection titled You Are Meant to Be Like Fire and a book of poems and photographs titled Presence. She is also the author of two children’s books. “Writing poetry is a contemplative experience for me,” she says. “I look for the words to express what is just beneath the surface of things.” 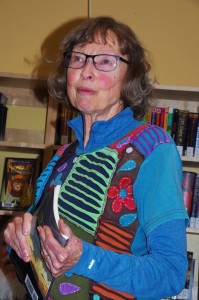 Sheila Falle writes primarily in free verse, but with taut lines that allow no room for excess verbiage to get in the way of the images and ideas she presents—a key lesson all poets must learn. Demonstrating a haiku-like precision, in just three lines, I Believe illustrates the point: “Rhymes that wind inside the mind / like the tangle of a too-long nightgown / awaken.” Again, In Spring uses just a few words to create a vivid picture: “Bright green on each tip makes / spring fir trees look like / ruffled party dresses…” Like the other poets, Falle explores a folklore theme in Riddled by Stars with her unique take on Humpty Dumpty. “My poetic education and background began in early childhood with Dad’s love of the sounds found in poems and songs,” she recalls. “Now I favour poems that distill and universalize experience yet remain each poet’s own expression.”

My only criticism is that it would have been useful to have a table of contents. Five Kootenay Lake Poets will be available on Amazon in April as either a print or e-book.

I am a poet, journalist and author with a strong commitment to the environment and social justice. If anything, I have too many interests and too little time in a day to pursue them all. Film, poetry, literature, music, mythology, and history probably top the list. My musical interests lie firmly in rock and blues with a smattering of folk and world music. I consider myself lucky to have lived during the great flowering of modern rock music during its Golden Age in the late 1960s/early '70s. In poetry my major inspirations are Dylan Thomas, Rilke, Neruda and the early 20th century British/American poets: Auden, Eliot, Cummings. My preferred cinema includes the great French auteurs, Kirosawa, Orson Welles, and Film Noir. My preferred social causes are too numerous to mention but include banning GMOs, eliminating poverty (ha-ha), and a sane approach to forest conservation and resource extraction. Wish me—wish us all—luck on that one!
View all posts by seanarthurjoyce →
This entry was posted in Arts & Culture, book reviews, Poetry, The Kootenays and tagged books, Five Kootenay Lake Poets, Jim Lawrence photographer, Kootenay culture, Mark Mealing, Maude Barlow, Pablo Neruda, poetry, poetry anthologies, poetry reviews, reviews, Robert Banks Foster, social justice. Bookmark the permalink.