“Oh the sisters of mercy, they are not departed or gone.

They were waiting for me when I thought that I just can’t go on.

Oh I hope you run into them, you who’ve been travelling so long.

Yes you who must leave everything that you cannot control.

It begins with your family, but soon it comes around to your soul.”

At age 82, Order of Canada recipient Joy Kogawa continues to challenge both herself and her audiences. As part of The Langham’s commemoration of the 75th anniversary of Japanese Canadian internment, ‘Memory and Reflection,’ the author appeared with the Tasai Collective in the performance A Suitcase of Memories. The Langham’s newly air-conditioned theatre was packed for the event the evening of July 11. 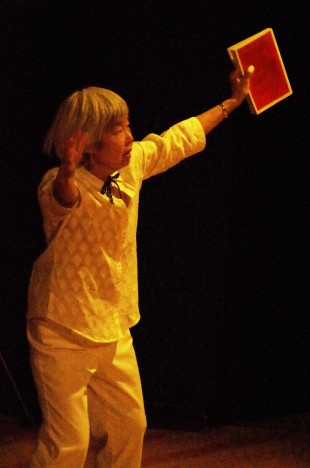 Kogawa is touring to promote her new nonfiction book Gently to Nagasaki, which she says is a reply to the statement in her famous novel Obasan that there is no reply to that story. Both books focus on Japanese Canadian families torn apart by war and internment, hewing closely to Kogawa’s own family experience. Her father, raised as a Buddhist in Japan, was converted to Christianity in Canada and became a priest in the Anglican church. Christian allegory informs her attempts to reconcile both the horrific atom bombing of Nagasaki and the discovery that her father had been a pedophile. Kogawa in Gently to Nagasaki notes that one of Japan’s largest Christian communities was located in that city when it was destroyed. The terrible irony is that it had survived centuries of domestic persecution before being wiped out by America, a Christian nation. She notes that the Christian injunction to forgive even your enemies is a command, not an option. Much of her life’s work has been about finding a way to do just that.

“The freeing voice is what is in that reply to Obasan,” she told the Kaslo audience. “The new book is a scream for the presence of mercy because I could not live without it.”

Rather than simply do a reading from the book, Kogawa chose to work with the Vancouver-based Tasai Collective, comprised of poet/performer Soramaru Takayama, performer Yurie Hoyoyon and director Steve Frost. In Japanese ‘tasai’ means multifaceted or multi-talented. Passages from Gently to Nagasaki were read by Kogawa in English, then by Takayama in Japanese, and then simultaneously. “The two together are being given full voice,” says director Frost, who worked with Takayama on the translations. “It’s a collision of words and something new comes out of it. For people who are bilingual it brings it all together. For Joy, hearing the Japanese, which she grew up hearing, was comforting.”

Soramaru Takayama as the Clown in ‘A Suitcase of Memories’ with Joy Kogawa. The Langham Cultural Centre, Kaslo, BC, July 11, 2017. Photo Sean Arthur Joyce

The performance was presented in three sequences: The Balloon of Silence, A Suitcase of Memories and The Tree Fable. In the first sequence Takayama appeared as a clown miming the ever growing of the ‘balloon of silence.’ This illustrates what happens when grievous mistakes are made that people refuse to talk about or apologize for, as during the initial decades after the internment. The clown’s childlike innocence was the perfect foil for the heaviness of individual and collective guilt. It was impossible not to be charmed by Takayama’s performance.

In A Suitcase of Memories, Kogawa read a poem that appears in Gently to Nagasaki, invoking the Goddess of Mercy. “The goddess of mercy and goddess of abundance, which are the same, came to me in a dream,” she told the audience. Takayama reappeared as the clown, lugging a heavy suitcase and pulling out its contents to decide what to keep and what to leave behind. Only when the suitcase has been lightened enough can he keep moving, keeping only memories and the reasons for the journey. Kogawa continues the journey with the blessing of the goddess, who reassures her, “I am with you… in the terror and at the heart of what you most fear, I am with you. Through the long dark night of every absence, I am with you, therefore fear not.” 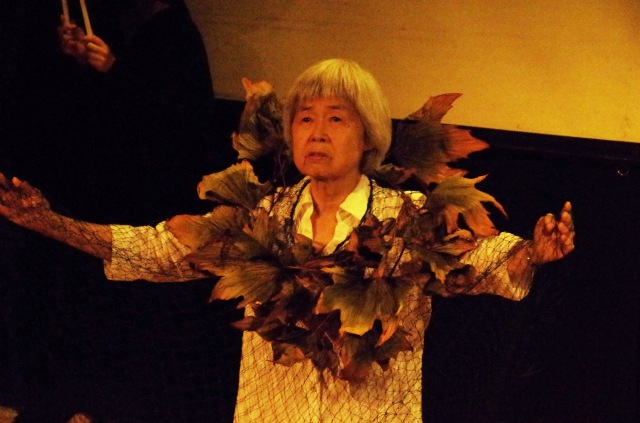 Joy Kogawa in ‘The Tree Fable’ at The Langham, Kaslo, BC. Photo Sean Arthur Joyce

The Tree Fable was a piece she’d written for Gently to Nagasaki but which the editors had removed. Kogawa explained how, during a wistful visit to the family home in Vancouver, she discovered a withered old tree in the back yard. Inexplicably drawn to it, she felt something akin to love at first sight, the empathic response of two wounded beings. Returning a few days later, she put her hand on the bark of the tree and felt “a sensation, not as strong as a jolt but distinctly warm” course through her arm. “What struck me at that instant was the sense of a Presence. The life of which I was a part, my family’s life, my community’s life, everything that was done to any of us or by any of us—everything—all the good, all the evil, all the shame, all the secrets, all the kindness, all the sorrow, all, all, all, was fully known. A tide within me surged forth and I acknowledged the Knowing as the Presence of Love.” For Kogawa it was another step on the path to healing. The Tree Fable is one of several fables that had been written for the book but edited out. She says there’s a possibility they could appear in a future children’s book.

“One of the things I love about this show is that the kids love it,” says Frost. “It’s a combination of the cultural and the poetic. Words are rooted in each culture and when you bring those things together something else gets made.”

Some may feel that the breezy, almost comic approach taken in A Suitcase of Memories actually avoids the grave topic at hand. Kogawa told the audience her goal with the show was to try to “make a heavy thing lighter.” She leaves the reconciliation of history’s crimes to others. Gently to Nagasaki is about a lifelong spiritual journey to reconcile herself with her personal history. It’s a lifelong quest she’s accomplished with impressive grace and wisdom. Neither her written words nor her soft-spoken presence betrays bitterness. “You can’t love people you can’t see. The job is to find out what is hidden from you. That’s the task of this book. Eventually we’ll get there. Sometimes the arc of loving the enemy gets longer, but eventually it gets there.”

“If I could follow the stream down and down to the hidden voice, would I come at last to the freeing word?” —Joy Kogawa, Gently to Nagasaki

NOTE: While the Truth and Reconciliation hearings into the residential schools that damaged or destroyed generations of First Nations people are still top of mind, I thought it appropriate to ask Kogawa about her own journey of reconciliation, and how she uses her art to this end.

JOYCE: I’m fascinated by the way you have dedicated so much of your life to reconciliation, for example your work with the Green family of Kaslo in 2012, and also with the difficult issue of your father. What prompted you to choose this path? You could easily have chosen to avoid it, as many in the JC community have done.

KOGAWA: I am guided by certain notions that I imbibed from Western values, i.e. being truthful. My mother was also a very truthful person, which is a value she picked up from English missionaries. Without truth there is no reconciliation. Without reconciliation we have ongoing suffering. 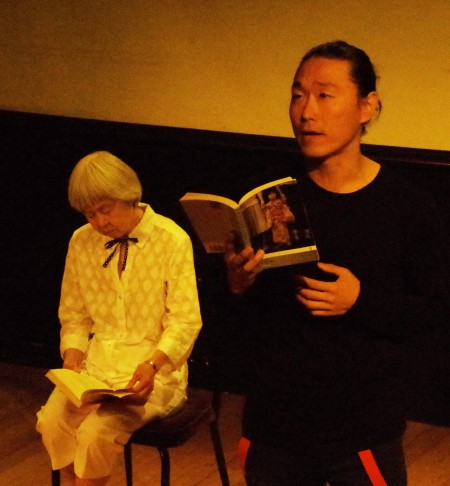 JOYCE: It must have been very hard dealing with your father’s legacy. If you’re prepared to talk about that, how has this been progressing?

KOGAWA: I’m exhausted by the ongoing-ness of it. And I have too much to say about it. NOTE: In Gently to Nagasaki Kogawa explores how she came to terms with this legacy of child abuse. She writes of suffering debilitating bouts of nausea in reaction to it: “When I’d first learned of this impossiblity as a teenager, my psyche and my soma convulsed. I did not stop loving him, although at times the roiling within caused my skin to crawl.” During a trip to Japan with her father in his later years she confronted him about it, something not traditionally done in Japanese culture. It was a painful object lesson in just how emotionally complex these legacies are. Simple forgiveness is never simple, even in a culture where children are taught to honour their parents. She speaks of the paradox of her father’s nature, both healer and abuser. As a minister, “very often he sensed the needs of people who were ill, people on the brink of death, people suffering from some calamity. He would phone. He would write. More than once I had driven him to visit a family of someone who was sick or in crisis.” It was during this trip to Japan that she had the dream of the Goddess of Mercy and Abundance, helping her reconcile these wrenching forces.

JOYCE: Let’s talk about your performance tonight at the Langham. You’re collaborating with poet Soramaru Takayama in what is being billed as ‘a poem within a poem.’ How did this collaboration come about? What excites you about it?

KOGAWA: They were among the people at a book launch for Gently to Nagasaki at my childhood home in Marpole and they asked if I would collaborate with them. I thought, ‘Why not?’ The exciting thing is getting to know them bit by bit, the competence, the spontaneity, the flexibility, the willingness to serve, the humility and modesty, the helpfulness, the kindness and gentleness is part of who they are. And on top of that, they are talented and open. Of course I don’t know them very well since we’ve just met a few times and we know we are all flawed. But I am drawn by the ideas that have been generated so far by Soramaru.

JOYCE: Genre boundaries seem to be breaking down, as artists cross-pollinate more and more between genres and even different artistic disciplines. Do you see this as a positive development for writers?

KOGAWA: I see it as an evolution, not just for writers but towards more holistic ways of knowing.

JOYCE: What role do you see poetry playing in activism? Clearly your work has a strong activist element. Do you think poetry can change peoples’ perceptions?

KOGAWA: Poetry opens the mind and heart for those who have ears for poetry. We are all multi-faceted and some are more dependent on their eyes, etc. But it seems to me that when the mind and heart are engaged, action is a natural outcome.

I am a poet, journalist and author with a strong commitment to the environment and social justice. If anything, I have too many interests and too little time in a day to pursue them all. Film, poetry, literature, music, mythology, and history probably top the list. My musical interests lie firmly in rock and blues with a smattering of folk and world music. I consider myself lucky to have lived during the great flowering of modern rock music during its Golden Age in the late 1960s/early '70s. In poetry my major inspirations are Dylan Thomas, Rilke, Neruda and the early 20th century British/American poets: Auden, Eliot, Cummings. My preferred cinema includes the great French auteurs, Kirosawa, Orson Welles, and Film Noir. My preferred social causes are too numerous to mention but include banning GMOs, eliminating poverty (ha-ha), and a sane approach to forest conservation and resource extraction. Wish me—wish us all—luck on that one!
View all posts by seanarthurjoyce →
This entry was posted in Art, Arts & Culture, Books, Poetry and tagged crossing writing genres, Gently to Nagasaki, Joy Kogawa at The Langham, Joy Kogawa interview, Obasan, performance poetry, poetry, Tasai Collective, truth and reconciliation. Bookmark the permalink.