Catching Up on the Canuck Blues

Posted on February 27, 2018 by seanarthurjoyce

If you think the hippest, hottest bands are coming out of Los Angeles, you are mistaken! More power to Jack de Keyzer, come show the Americans what we’ve been missing! —Kathy Pellizzi, Los Angeles Film & Music

It’s not every day you stumble across a national treasure—or two. But that’s just what happened to me the other day when Brian Slack’s Zeb Productions landed four new CDs in my mailbox: The Best of Jack de Keyzer, Steve Strongman’s No Time Like Now, and two albums by Mike Goudreau & the Boppin’ Blues Band: Sweet Blues and Alternate Takes Vol. 1. But first, a disclaimer: clearly I’m no authority on the Canadian blues scene, or I would have heard of these great players long before now. In fairness to myself, the celebrity-brained media tends to obsess over the same few stars over and over. Canadian artists have always had to swim upstream against the tide of the American-dominated music industry. So while Jeff Healey, Colin James, Powder Blues, Downchild and a handful of others are household names….

‘The Best of Jack de Keyzer Volume 1’ is a must-have for blues lovers. Courtesy band website.

Jack de Keyzer is clearly one of the hardest-working names in Canuck blues, with an average 120 shows per year. His 24-year track record covers eight albums plus the new one. De Keyzer maintains a furious touring schedule, performing gigs from “Alert, Arctic Circle to Puerto Escondido, Mexico; from Athens, Greece to Hornby Island, BC.” Again, a mystery to me how I missed this guy! De Keyzer’s own liner notes on The Best of provide a useful synopsis of his long career, with 16 of what he considers his best tracks. I agree. The result is 70 minutes of pure listening joy. This guy is Albert King, BB King, Eric Clapton and Stevie Ray Vaughan all rolled into one. He fires with the same unflinching intensity as the best of them. Mesmerizing. The album covers blues, soul, jazz and even a hint of rockabilly from his early days in the biz. And how many blues lyricists do you know who can effortlessly work Shakespeare into a song without sounding pretentious? (Music is the Food of Love) Some of his own descriptions of the songs are the best. Of the song Blues Thing he writes: “somewhere between Hi, Stax, Memphis and Whitby, Ontario.” (Just in case you thought the blues was antithetical to Canadian suburbia.) “Engine Trouble is one of my most popular tunes and this is the original version recorded at famed Liquid Sound, Toronto, which eventually had to close because of flooding and leaking pipes!” De Keyzer gets a nod from me for the Best Liner Notes nomination. My least favourite songs are the rockabilly Rock ’n Roll Girl and the country-tinged Nothing in the World. But that still leaves 14 tunes that sizzle off the speaker grille. This is virtuoso playing at the level of the blues greats (see namechecks above) and makes The Best of Jack de Keyzer a must-have album for any blues lover. http://www.jackdekeyzer.com 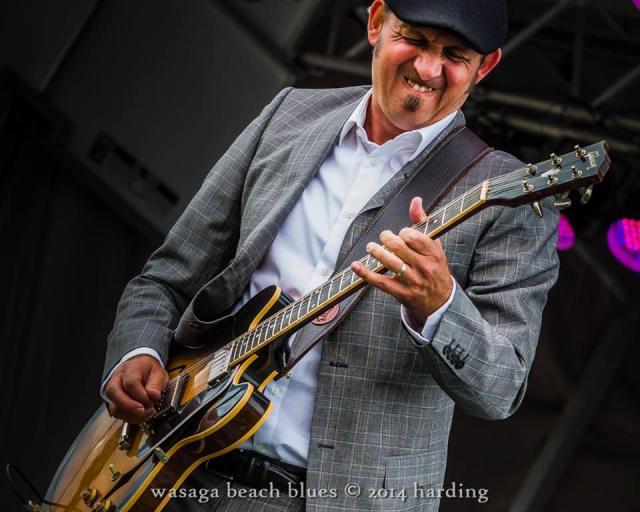 With such a deep-rooted tradition as the blues, it’s increasingly a challenge for artists to put their unique stamp on it. What hasn’t been done? Not much. Yet Steve Strongman manages it somehow on his new roots blues album No Time Like Now, with a special guest appearance by Randy Bachman on BTO’s classic You Ain’t Seen Nothin’ Yet. Strongman surrounds himself with tasty players who know when to hang fire and when to light it up, including drummers Dave King and Adam Warner, bassists Rob Szabo and Alec Fraser, and keyboardist Jesse O’Brien. The title track kicks off the album in strength, with a rock groove that nicely blends acoustic and electric guitars and a stompin’ vocal chorus. Strongman is adept at creating memorable choruses and every original on this album is memorable in its own right. There’s a clear talent for uncluttered, controlled power in his arrangements. Examples include Bring the Hammer Down, Money in the Bank, Love, Love, Love and, well, pretty much everything here. What’s impressive is Strongman’s ear for just the right flourish at the right moment, whether it’s a gospel-style chorus, a blues harp, a dash of funk (I’m A Man) or a touch of overdriven dobro. There’s not much show-offy soloing here. But when he lets ’er rip, he’s no slouch on the fretboard either. Strongman gives tribute to his blues forebears in Old School: “If you really want to learn, you gotta go to the old school.” Oh yeah. More reflective tunes like Good Times demonstrate Strongman’s impressive emotional range. Sometimes is positively haunting and The Day They Carry Me Away is a ballad par excellence. The mix throughout is pristine, with great resonance and separation. This is all killer, no filler. No Time Like Now, along with The Best of Jack de Keyzer, is my pick for Best Canuck Blues of 2018 (so far). https://www.stevestrongman.com

You could add to that pick Mike Goudreau. At times Sweet Blues reminds me of BB King’s big Chicago show band, with Goudreau’s hard-driving horn section. His Boppin’ Blues Band is a well-oiled machine keepin’ the toes tappin’. Swing is king on this album. Every tune is delivered with sheer gusto and professional polish. Goudreau is as well known for an impressive list of TV theme songs as for his albums. His influences are eclectic to say the least: the Beatles, Chuck Berry, Stones, Johnny Cash, Nat King Cole, Louis Armstrong, Sinatra, Albert King, Freddie King, Stevie Ray Vaughan, Powder Blues and Downchild. But Goudreau is no mere tribute artist—his guitar style is recognizably his own, a beautifully forged reinvention of its sources. Equally proficient at jazz and blues, Goudreau says: “I get bored doing just one type of music. I love jazz for its beautiful melodies, chords, and improvisation. I love blues for its energy, soul and milking its three-chord structure. I enjoy playing rock ’n roll too. But no matter what music I play it has to SWING!” A quick look at his discography confirms his wide-ranging curiosity in blues and roots music. Never having been much of a horn lover, I actually prefer Alternate Takes No.1, culled from Goudreau’s archive of unreleased material. More straight-up blues numbers like Should Quit Your Drinkin’ allow his guitar to step out front and talk to us oh so sweetly. He turns on a dime to a reggae groove in Mend My Broken Heart, switches to the piano-driven honky-tonk of Got Your Letter, then gypsy jazz á la Django Reinhardt on Easy to Love, all effortlessly. And on it goes through 16 unstoppable tracks. Too often, albums of unreleased material are just an excuse to keep the cash flowing, but not here. Both his new albums are highly recommended for blues lovers. http://mikegoudreau.com/bio/

I am a poet, journalist and author with a strong commitment to the environment and social justice. If anything, I have too many interests and too little time in a day to pursue them all. Film, poetry, literature, music, mythology, and history probably top the list. My musical interests lie firmly in rock and blues with a smattering of folk and world music. I consider myself lucky to have lived during the great flowering of modern rock music during its Golden Age in the late 1960s/early '70s. In poetry my major inspirations are Dylan Thomas, Rilke, Neruda and the early 20th century British/American poets: Auden, Eliot, Cummings. My preferred cinema includes the great French auteurs, Kirosawa, Orson Welles, and Film Noir. My preferred social causes are too numerous to mention but include banning GMOs, eliminating poverty (ha-ha), and a sane approach to forest conservation and resource extraction. Wish me—wish us all—luck on that one!
View all posts by seanarthurjoyce →
This entry was posted in blues, Music and tagged Albert King, BB King, blues reviews, Canadian blues, Canuck blues, Colin James, contemporary blues, Downchild, Downchild Blues Band, Jack de Keyzer, Jeff Healey, Mike Goudreau, Mike Goudreau & the Boppin' Blues Band, Powder Blues, Randy Bachman, reviews, Steve Strongman, Stevie Ray Vaughan. Bookmark the permalink.

3 Responses to Catching Up on the Canuck Blues