Poetry is indeed alive and well in 2018. Judging by recent books by both established and emerging poets, the art is in fine fettle. There’s evidence of both high craft and relevance to the social and environmental circumstances in which we find ourselves. And finally, the taboo against political poetry seems to have lifted in Canadian poetry.

In one of my first blog posts in 2011, I foolishly announced that “poetry is dead.” Of course, I wasn’t the first to make such a reckless declaration. There’s even a journal now called Poetry is Dead, as if to ironically underscore the point that in fact it still thrives. In my defense I will say that poetry in the early 21st century lives in a strange paradox: more books of poetry being published than at any time in history, yet fewer readers of poetry than ever. Welcome to the age of cognitive dissonance. Just ask a publisher about trying to sell books of poems and you’ll get the exasperated equivalent of an eye-roll. Way back in 1990, in an interview with Tom Wayman for our Selkirk College magazine, he said that Canadian poetry was kept alive on the “artificial life support” of the grant funding system. That, and proliferation of creative writing faculties in the past 30 years. But is anyone outside these faculties actually reading poetry? When I wrote that essay, I was questioning poetry’s role “as a relevant cultural force.”

But of course poetry is perennially, eternally relevant. Poetry was where political leaders often found their most pithy quotes, at least in the pre-Trump, pre-Twitter era. That’s the greatness of the art: its ability to summarize human experience in just a few words or lines. The great poems act as high-energy constructs, densely packed and ready to go off like a Roman candle in your mind. Better yet, its fireworks change both shape and colour every time you read the poem. More subtleties emerge, more shades of meaning.

Kelly Shepherd: Shift (Thistledown Press). I discovered Shepherd’s work through a mutual friend who thought our poetics were sympatico, and he was right. In my own poetry I strive to get out of the typical self-absorption of humans and get inside all the other lives—from moths to robins to elephants—with whom we share this planet. After all, in the trajectory toward the universal, contemplation of the self is only going halfway. Most poets writing about ecological concerns aren’t necessarily anxious to be labeled ‘eco poets’ but there’s no denying the theme is present in Shepherd’s work. At times there’s a shamanistic quality to his voice, but its authenticity never succumbs to the faux shamanism of so many New Agers. The poem In Exchange for Flight is an example:

…a bird hollows its bones,

letting the sky enter its body

in exchange for flight.

In Webs Across the Eyes, Shepherd deftly explores the hidden magic of the wild, a magic that animals understand intuitively:

Some spiders know the knots

to tie a cluster of Oregon grape

into one single dusty purple berry. If a

black bear swallows it under the right moon

he or she will become a powerful shaman,

able to speak the language of spiders.

Long before today’s ‘eco poets,’ the Romantic poets and early transcendentalist movement of Thoreau and Emerson attempted to turn us back to a less destructive relationship with the natural world. They saw from the outset of industrial capitalism what a divorce from nature would cost us in spiritual terms. In the 200 years since, our consumer culture and capacity for intellectual abstraction and narcissism has largely divorced us from our innate connection with the planet. The result has been climate chaos and endemic depression. But the best poets don’t sermonize, they create a space within the poem—an Aha! moment of transcendence—akin to the experience of actually being in nature. It’s the transcendence that comes from having our toes in the wet soil of the Earth. We are, after all, Earth animals. And there is indeed a transcendent element to Shepherd’s poems, thanks to his careful attention to craft. Little Thunderstorm Songs deserves quoting in its entirety:

the rain is coming!

The wind is rising,

the pond will burst its seams.

There are quite a number of ‘found’ poems in Shift. I’ve always been vaguely suspicious of found poems on the same principle that I remain skeptical of electronic music composed entirely of excerpts or ‘samples’ of other artists’ music. Too often it seems like thinly disguised plagiarism or a sheer lack of originality. So I asked Shepherd about it. 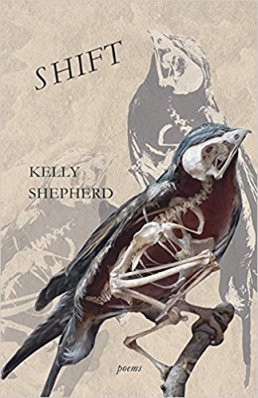 “I understand your point about techno music, simply combining other people’s music and calling it your own. This is hardly a musical skill, at least nowhere near the same category as playing piano or violin etc. However, at the same time (speaking of music) there is the notion of sampling as a way of paying homage, as is done in the best of hip hop music. They’re not claiming credit… they’re situating their music into a broader context. That’s more like what I had in mind with those found poems in Shift: acknowledging the genealogy of other writers in the nature writing / eco-poetry vein. Deliberately placing my own poems in that tradition, and thereby acknowledging my own literary / philosophical roots. The only one that’s different (not simply a direct quote) is the poem The First Metaphor where a passage from Annie Dillard is combined with a passage from John Berger. The direct quotes from the two different authors alternate.”

From this perspective then, the poet is acting as curator rather than originator. And clearly, Shepherd has a keen eye for the bon mot, the gold buried in the dross. To his credit, he provides the sources for his found poems in the notes at the back of the book. As has often been said, no art is ever 100 percent ‘original’ in the sense that everyone is influenced by someone else. Still, I don’t agree with those who go so far as to say there is no originality, only various gradations of ‘stealing.’ Though we all indeed in any craft or art stand on the shoulders of giants, it’s our originality, our genetic recombinations, that set us apart as writers.

Shift is an exciting discovery in Canadian poetry and deserves wide attention.

I should also note in this context northern BC poet Ken Belford’s 2005 collection Ecologue (Harbour Publishing), something of an updated coinage of ‘eclogue,’ a short pastoral poem that originated with 4th century BC Greek poet Theocritus. But unlike some poets who fall over themselves to avoid appearing strident, Belford is more of a plain speaker in the northern tradition. “Loggers wipe their asses with owls, / a synonym for old growth,” he writes in Weed book drift. “But shit doesn’t stick to feathers and / diversity is a moral responsibility / having to do with the transfer of properties.” In that sense he’s more in the tradition of Peter Trower or Milton Acorn than Don McKay. Yet in Acorn’s classic 1969 collection I’ve Tasted My Blood, he proved that poets can still pack a political punch within a superbly well-wrought poem, as for example in poems like I Shout Love. The danger of subtlety is that it can serve the wrong master. Trower, a former logger himself, had no problem naming the devastation wrought by industrial scale logging, “the land… hammered to stumps and ruin.” (The Ridge Trees)

Belford seems to have chosen the title of this collection somewhat ironically, positioning himself both within and without the tradition of the eclogue. “The conventional standards of narrative and lyric poetry give me nothing. The intention of the sequences I write is to assemble words that can be messaged to the habituated souls of the city from the land-aware that live outside city limits.” It’s an acknowledgement of the urban/rural divide of modern society, or what I call Canada’s 21st century ‘Two Solitudes,’ to borrow from Hugh Maclennan. With the late 20th century shift toward a primarily urban global population, only about 20 percent of Canada’s population resides in rural communities. Add climate chaos to that and it’s more important than ever that the ‘pastoral’ perspective isn’t lost.

But whether ‘eco poets’ strive simply to emulate the sense of presence in the landscape, as Shepherd does, or call out those responsible for its destruction, both are, to quote Belford in Land schemas, seeking “the return path”:

Away in the burrow out of earshot

the earthworm snuffles toward connexion,

zeroing in on the return path.

I am a poet, journalist and author with a strong commitment to the environment and social justice. If anything, I have too many interests and too little time in a day to pursue them all. Film, poetry, literature, music, mythology, and history probably top the list. My musical interests lie firmly in rock and blues with a smattering of folk and world music. I consider myself lucky to have lived during the great flowering of modern rock music during its Golden Age in the late 1960s/early '70s. In poetry my major inspirations are Dylan Thomas, Rilke, Neruda and the early 20th century British/American poets: Auden, Eliot, Cummings. My preferred cinema includes the great French auteurs, Kirosawa, Orson Welles, and Film Noir. My preferred social causes are too numerous to mention but include banning GMOs, eliminating poverty (ha-ha), and a sane approach to forest conservation and resource extraction. Wish me—wish us all—luck on that one!
View all posts by seanarthurjoyce →
This entry was posted in Poetry, politics, Writing and tagged eclogue, ecopoetry, environment, Kelly Shepherd Shift, Ken Belford, Ken Belford Ecologue, Milton Acorn, nature, pastoral poem, poetics, poetry, urban/rural divide. Bookmark the permalink.