Posted on August 18, 2018 by seanarthurjoyce 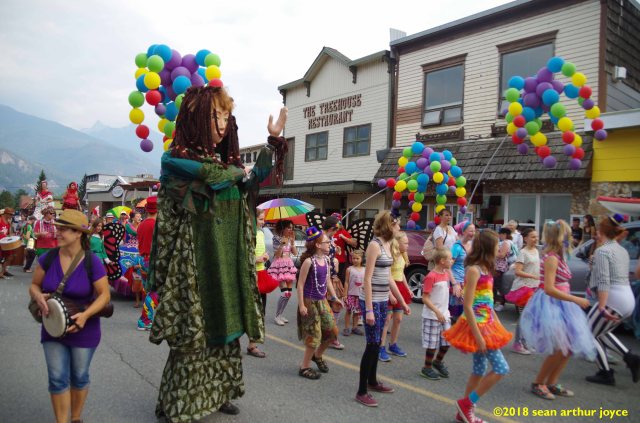 From the swirl of colour and rhythm at the grand opening parade on Friday evening to the last sweet sounds trailing off into Sunday night, Kaslo Jazzfest once again made a lot of people happy. Over 2,600 of them, in fact – peak ticket sales reached 2,618 on Saturday. The local rumour mill claimed that 3,000 tickets had been sold, causing concern about overcrowded campsites in the village. But according to festival director Paul Hinrichs, it’s not true.

“We actually sold more tickets on the Friday in 2016 with Michael Franti. That day we sold 2,670 tickets. That was a record, the biggest day Kaslo Jazz has ever had.”

At meetings prior to each festival the board decides on a maximum capacity that will work that year given infrastructure, volunteer numbers, weather, etc. That number often falls far short of 3,000. “We’ve never sold that high because it would take a lot more resources. We sell to the capacity we’re comfortable managing,” says Hinrichs. “Even at 2,600 it feels full, it’s the sweet spot. This year Sunday only had 2,300 on site, so we didn’t quite get there for the whole festival.” This in part is what has earned the festival its reputation as one of the top outdoor festivals in North America—its family atmosphere and sense of intimacy. 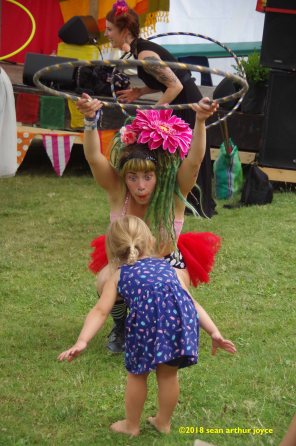 Kids find plenty to do at Jazzfest including learning the hula hoop.

Festival patrons noticed another change on-site this year – the floating stage rode higher in the water and has a new lighting rig. The stage was raised by 28 inches, partly in response to complaints in recent years about sightlines. In the past, dancers were relegated to zones on either side of the floating stage, keeping sightlines open to those sitting down. When the new management reversed this policy, allowing dancers up front, the view was blocked. To remedy the situation, the festival successfully applied for funding to renovate the stage, receiving funds from Creative BC, CKCA/CBT, and the Province of BC. This paid for a complete replacement of the superstructure, adding 50,000 pounds to its weight. The project is ongoing; next year the canvas arch above the stage will be replaced with trusses capable of suspending lighting and sound equipment.

Others noticed a new LED lighting system onstage. It’s also the first year the stage has used a smoke machine for effects. Hinrichs says many bands now stipulate in their contract the lighting needs for their show and come with their own lighting director. There were some issues with lights pointing into patrons’ eyes, but Hinrichs says by Sunday this was remedied. “Personally I expect a certain production value when I pay a couple hundred bucks for a festival ticket. We’re going to continue to grow the light show. Was it perfect this year? No, of course, we’re still learning.”

Although the festival has had to change its roster of performers to reflect a more eclectic music market and younger audiences, Hinrichs says he’s not really interested in tracking age-related demographics. He sees Jazzfest as an all-ages event featuring improved kids’ events and wheelchair access. “I worry that by tracking age you can end up with an ‘us and them’ factor. I just feel like music lovers can be any age. I’m much more interested if somebody’s a repeat customer as well as where they come from. I just want the best live music experience people can have.”

Visually the festival was a treat as always, kicked off by the delightful spectacle of the grand opening parade on mainstreet making its way to Kaslo Bay Park. It was Kaslo’s own Mardi Gras Day, with the dazzling costumes and stilt-walkers of the Circus Act Insomniacs, the pulsing rhythms of the Moving Mosaic Samba Band, and kids’ dancing choreographed by Glynis Waring.

The content of the festival was sonically impressive, from the ‘newgrass’ of Greensky Bluegrass, to the new take on singer-songwriters manifest in Shakey Graves’ wildly popular show, to jumpin’ grooves by Shred Kelly, to the avant-garde ‘brass house’ horns of Too Many Zooz, to major stars like Mavis Staples and Buffy Sainte-Marie. These two women are icons of both popular music and social justice history, still performing into their late 70s. Mavis spoke of being part of the historic march with Dr. Martin Luther King from Selma to Montgomery, Alabama in March 1965. Her new album, If All I Was Was Black, is her soulful R&B message to a 21st century America ripped apart by racial tensions. She performed several of the album tracks, including Build a Bridge, Little Bit, We Go High along with classic R&B numbers. Her between-song banter was relaxed, as if chatting with us in her living room. Her band was unstoppable in their cover of Talking Heads’ Slippery People, oddly enough an ideal song for Mavis. She said in a music career spanning six decades it was the first time she’d performed on a floating stage. “They tell me this festival has been going for 27 years now. What I want to know is, why you didn’t invite me before now!”

Buffy Sainte Marie is one of the most decorated artists in music, with 12 honorary doctorates, an Academy Award, Golden Globe Award, and five Juno Awards, to name only a few. She spoke eloquently about the history of racial oppression but made it clear her activism wasn’t limited to racial issues, but to the cause of peace generally. As if to underline the point, she performed her 2015 song The War Racket, whose lyrics are unambiguous in exposing one of the most evil, profitable industries in the world. The crowd raised the roof with applause when she sang favourites like Universal Soldier, Starwalker and Bury My Heart at Wounded Knee. She also led the crowd in a singalong of the old solidarity hymn We Are Community. Like Mavis, Buffy is touring a new album that sees no diminishment of her powers, Medicine Songs. It was incredible to see enthusiastic fans as young as their early teens singing along to her songs right alongside fans old enough to be their grandparents. The stage-shaking cheers Mavis and Buffy received during their shows proves both their popularity and their message remains strong.

“I wasn’t around in the sixties when their message was fresh but I think it’s just as important now,” says Hinrichs. “If you look through our lineup a lot of the bands had a message in their music. Mavis and Buffy both seemed to have a fantastic time, so it meant a lot to have them go away feeling that.”

None of this is to give short shrift to the younger, newer artists who graced the stages at Kaslo Jazzfest this year. I betray my age when I confess how surprised I was to see how big a star Shakey Graves is with his audience, many of whom knew the lyrics to every song.

I am a poet, journalist and author with a strong commitment to the environment and social justice. If anything, I have too many interests and too little time in a day to pursue them all. Film, poetry, literature, music, mythology, and history probably top the list. My musical interests lie firmly in rock and blues with a smattering of folk and world music. I consider myself lucky to have lived during the great flowering of modern rock music during its Golden Age in the late 1960s/early '70s. In poetry my major inspirations are Dylan Thomas, Rilke, Neruda and the early 20th century British/American poets: Auden, Eliot, Cummings. My preferred cinema includes the great French auteurs, Kirosawa, Orson Welles, and Film Noir. My preferred social causes are too numerous to mention but include banning GMOs, eliminating poverty (ha-ha), and a sane approach to forest conservation and resource extraction. Wish me—wish us all—luck on that one!
View all posts by seanarthurjoyce →
This entry was posted in Kaslo Jazzfest, Music, The Kootenays and tagged brass house, Buffy Sainte Marie, Greensky Bluegrass, Kaslo Jazzfest 2018, Mavis Staples, Music in the Kootenays, newgrass, Shakey Graves, Shred Kelly, social justice music. Bookmark the permalink.