Diary of a Plague Year Parts 1–3 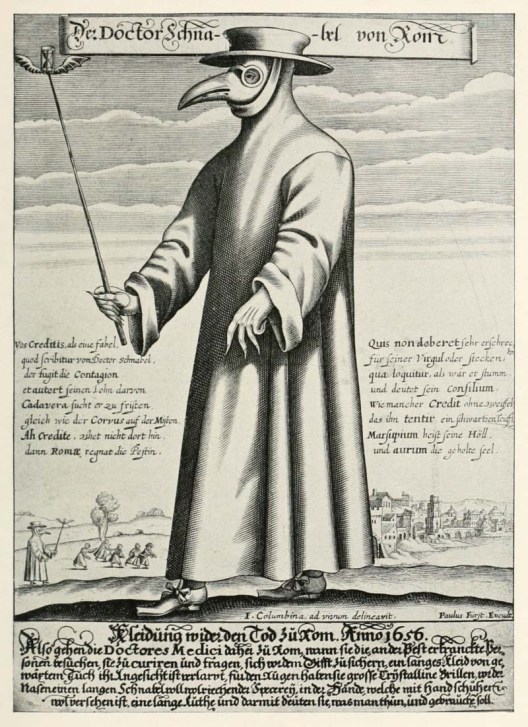 I had two important things before me: the one was the carrying on my business and shop… in which was embarked all my effects in the world; and the other was the preservation of my life in so dismal a calamity as I saw apparently was coming upon the whole city, and which, however great it was, my fears perhaps, as well as other people’s, represented to be much greater than it could be.

—Daniel Defoe, A Journal of the Plague Year, first published in 1722 regarding the great plague of 1665 that struck the city of London

In my diary of a plague year,

even the pages are dangerous to touch.

Who knows where words have been,

their filthy little hands all over everything.

waving sensual beaks from side to side,

designer gowns clung to an infrastructure

off-key rants about how our sins

led us to this pestilence, how our lust

for touch made us all Typhoid Marys.

Coming out of the grocery store,

a woman leaned so far away from me

I thought she’d fall and shatter.

A man paying for his prescription

My grandpa died in the arms of his faith,

sure of his place in the next world:

I’m the one who’s getting off easy.

I pity those who still have to live.

I know what he means. The streets,

empty, but the residue of our touch

makes them ache for our presence.

Nothing disappears without a trace,

but will we ever return? Or is this

our epitaph, that as a species we are

between leavers and takers, the sane

and the psychopaths, the controlled

and the controllers. Fear is the virus.

The next world is a long way down.

Moses by Michelangelo, housed in the Church of San Pietro, Rome.

In the Biblical tradition, when Pharaoh refuses Moses permission to lead his people out of Egypt, God promises to send plagues on the Egyptians. To protect his own people, the Hebrews, he instructs them to paint their doorposts with the blood of a sacrificial lamb so that the angel of destruction will pass over them. This became the basis of the modern Jewish Passover celebration, which has accrued its own traditions over the centuries. According to History.com, the Seder ceremony includes children, who ask four questions designed to explain what distinguishes this special night from all other nights.

as the Passover angel flies on stealth wings

that cost the Pentagon 10 billion dollars

and emptied hospitals of ventilators

and surgical supplies. No lamb’s blood

can save us from the plague of masks,

filtering our words, our thoughts,

our very breath. It has become a sin

to look one another in the eye.

Italians flouted this ban and sang

from their balconies, parting the Sea of Fear

with music. No modern-day pharaoh,

no Presidente or Il Duce can stop

the exodus to the promised land

of the heart, the reign of reason that lives

only imperfectly outside the mind.

A little boy outside the grocery store

shrieks in fear as flies divebomb

of a routed insect armada.

His mother ensures that he never

leaves her sight, ever. His father is absent,

sent into exile. The boy will learn

to grow up afraid of any creature

that does not resemble him.

The secret symphony of bees

will remain a foreign tongue to him

long before they vanish forever.

Will mystery be too much for him?

Will he ask the Four Questions? Better yet,

will he learn to make up his own?

He is too young yet to know—knowledge

is the antidote, and questions the key.

“Going Mad for the Sake of Sanity” from book cover for a collection of poetry by Chad Norman. Photograph ©2007 Sean Arthur Joyce.

“…Deaths of despair from crashing the economy via lockdowns will significantly add to the final death toll and may end up surpassing fatalities from the virus itself.” —Toby Rogers, Ph.D

“Love is not illegal!” he boomed

meeting in a grocery store

for the first time in years,

yet still too afraid to embrace.

The simple act of shopping now

a hazard zone of simmering fears

a car with Alberta license plates

is screamed at outside the Safeway:

You don’t belong here! Go back

where you came from! You’ll make us all

sick! The heart behind its mask

starved of oxygen, the latent germ

an even greater plague.

As emergency rooms empty out,

at “deaths of despair” ghosts, gone

straight from quarantine to morgue.

No tree is separate from the forest,

roots and fungi a single web of life.

Isolate one and it begins to die.

Breathe, breathe in the mossy droplets.

I am a poet, journalist and author with a strong commitment to the environment and social justice. If anything, I have too many interests and too little time in a day to pursue them all. Film, poetry, literature, music, mythology, and history probably top the list. My musical interests lie firmly in rock and blues with a smattering of folk and world music. I consider myself lucky to have lived during the great flowering of modern rock music during its Golden Age in the late 1960s/early '70s. In poetry my major inspirations are Dylan Thomas, Rilke, Neruda and the early 20th century British/American poets: Auden, Eliot, Cummings. My preferred cinema includes the great French auteurs, Kirosawa, Orson Welles, and Film Noir. My preferred social causes are too numerous to mention but include banning GMOs, eliminating poverty (ha-ha), and a sane approach to forest conservation and resource extraction. Wish me—wish us all—luck on that one!
View all posts by seanarthurjoyce →
This entry was posted in Poetry, Political Commentary, Uncategorized and tagged coronavirus poetry, COVID19 poems, poetry, poetry of resistance. Bookmark the permalink.