Posted on April 6, 2021 by seanarthurjoyce 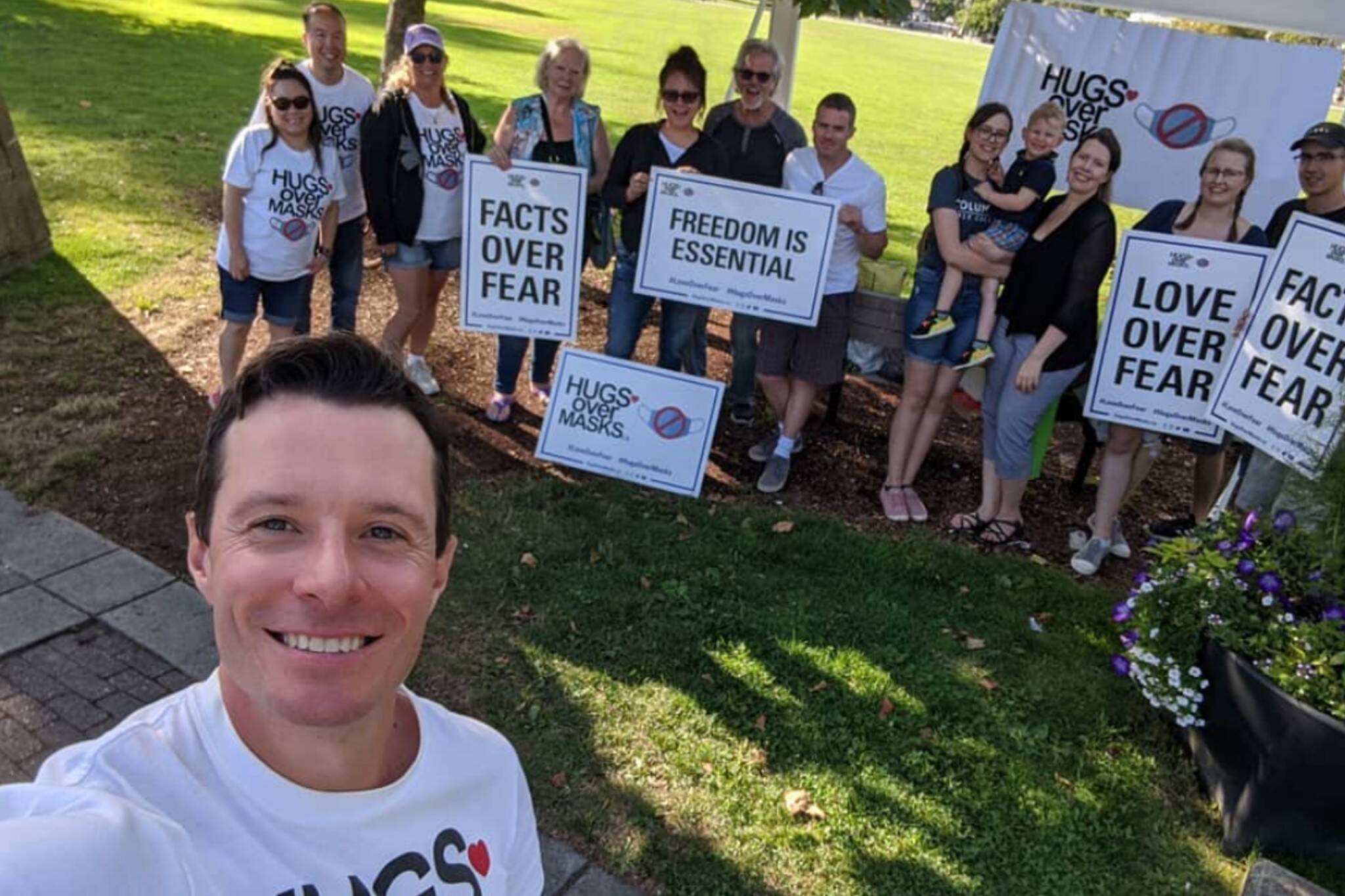 The national activist group Hugs Over Masks rolled into Nelson on Saturday, April 3 on its second tour of British Columbia. Founded by Vladislav Sobolev last year in Toronto, the group has attracted supporters across the country who are protesting mask and lockdown mandates. Rallies sponsored by the group have been held in cities across the country, including Toronto, Kitchener, Ottawa, Vancouver and Surrey. The current tour has held rallies in Penticton, Kelowna, Vernon, Nelson and Cranbrook, with further stops planned in other BC cities. The Nelson event was co-hosted by Kootenay Freedom. Two of the organizers are former residents of Communist countries who see a similar creep toward totalitarianism in the West with Covid restrictions.

“We started in Toronto but as soon as possible we moved out to the surrounding communities in the GTA,” said Sobolev. “I’d rather have 100 different locations with only 100 people than have them all in one place.”

Hugs Over Masks, We Are All Essential and Kootenay Freedom sponsored a rally in Nelson’s City Hall Square on April 3, 2021. Image by author.

About 100 people were present in Nelson City Hall square to hear presentations offered by Sobolev, We Are All Essential trainers Beatrice Weir and Marcella Desjarlais, Pastor Gord Harding, and retired physician Dr. Jane Grey. We Are All Essential is a national coalition of small business owners seeking to educate businesses as to their Charter rights and the mask exemptions issued by the BC Office of the Human Rights Commissioner. Nelson City Police provided non-intrusive support along with fire and ambulance services. However, RCMP officers swept in as the last rally participants were leaving and fined three people, issuing each $2300 tickets. This despite the fact that rally stewards were careful to maintain social distancing among the crowd during its Baker Street march.

This one-page ad from the Office of the Human Rights Commissioner clearly spells out legitimate mask exemptions in BC.

Sobolev and other speakers repeatedly emphasized the need for compassion when speaking to others about Covid. Sobolev held up a reproduction of the BC Office of the Human Rights Commissioner one-page ad explaining mask exemptions. The BCHRC website explains: “The poster is designed to be placed alongside notices or signage about a business’s mask-wearing policies.” Yet as Sobolek explained, “Hardly any stores have these and the media is not talking about this. This is equally part of the law along with mask requirements. Business owners cannot be fined for allowing customers to enter their businesses without masks. They are already suffering the loss of their businesses so they need to know this. Don’t be hard on staff asking you about your mask. They’re just doing their jobs. People are very confused; have some compassion for them—they are lost. If you can’t stay calm, just walk away.” BCOHRC Mask Exemption Poster

Pastor Gord Harding of Celebrations Church in Trail, BC led the crowd in a recital of the Lord’s Prayer, which he said Facebook “hates and tries to take down.” Harding has come under fire for keeping his church open and was fined $2300 for doing so. “I’m so proud to be here and so proud of all of you for taking a stand for our freedoms. I’ve had the faith community coming after me because I opened up, I kept the church open. We got a $2300 fine, and I don’t regret that fine at all. We needed to stand up and make a stand for righteousness.”

Dr. Jane Grey said she has been shocked by the unprecedented level of censorship taking place in the medical profession, something she hadn’t seen in 40 years of practice. She pointed out that adoption of the PCR test as the current “gold standard” for Covid testing was never peer-reviewed, and that its inventor Kary Mullis is on record stating that he never intended it for use as a diagnostic tool. She condemned the fear being promoted by the media about viruses and infection. “We were made from viruses through a series of evolutionary events.” She is equally appalled, she said, about the media hysteria regarding Covid “variants.” “It’s natural for viruses to mutate,” she said. “The variants are being publicized to achieve a political agenda. The imposition of masks and lockdowns can lead to more strains, possibly even more virulent.” Dr. Grey said there are many inexpensive, efficient means of prevention, including high daily intake of vitamin C and vitamin D, which can be safely taken up to 10,000 I.U. daily. She said maintaining a healthy lifestyle with exercise and healthy food is the best prevention. Signing up for an experimental vaccine, which she described as a “gene therapy,” is unnecessary and risky. She reminded the audience that these vaccines have only been allowed under “emergency use authorizations.” Product inserts from Johnson & Johnson, Pfizer, and Moderna clearly state they are still in clinical trials until 2023, except that the public is now part of these trials. “We have Common Law rights not to have invasive or experimental medical procedures. If you ask your doctor what are the long-term effects of vaccines, the correct answer should be: I don’t know.”

Useful questions asked at the Nelson rally. Photo by the author.

Beatrice Weir moved to Canada 24 years ago from Communist Romania and is now a Canadian citizen. “I came here expecting freedom because in my country we had none. In Romania, when the Communists took over, the first thing they did was to close the churches. The second thing they did was to close and take over all small businesses.” She said her family was warmly welcomed to Vernon, where she owns a restaurant. Like many restaurant owners, she was incensed that Bonnie Henry shut down restaurants on the Easter weekend with only 12 hours notice. “Remember: the government is our servant, not our master.” Weir said that there were 100,000 people in Romania on Saturday protesting the lockdowns, part of an ongoing resistance that has had people on the streets daily from 5:30–11:30 pm to put pressure on the Romanian government.

Sobolev said his experience growing up in Soviet Russia was a major part of his awakening to the loss of freedoms under the Covid regime in Canada. A former Toronto resident now living in Vancouver, he was born in Kazakhstan in 1980 and works as a health coach and fitness trainer. When he was only three years old, his parents made the pilgrimage to Moscow to see Lenin’s tomb in Red Square. When they arrived to find it closed, he remembers being very upset. “I cried because I couldn’t go see Grandpa Lenin. That shows you just how the indoctrination works. I was indoctrinated in Communism from birth, the same as children today are being indoctrinated in Covidism. That’s why last year I saw that this is going to get really bad really fast. From day one I was committed to educating people, not just getting an exemption for myself. They are 100 percent after the children—that’s why we have to protect them at all costs. Our grandparents did everything to protect our freedoms and we have to do the same.” Sobolev’s grandfather was a soldier in the Russian army that liberated Berlin.

A pertinent quote from Albert Einstein. Photo by the author.

We Are All Essential trainer Marcella Desjarlais reminded protestors that it’s a physiological fact that hugs have health benefits, releasing the beneficial hormone Oxytocin after just a 20-second hug. She also clarified the BC Trespass Act, which some business owners are using as a basis for kicking non-mask wearing customers out of their stores. “The Trespass Act in BC refers to rural or farming land or your private residence, not stores. They are licensed to provide a public service, so they can’t use the Trespass Act against you.”

Beatrice and Marcella did a role-play for the audience to demonstrate how a business owner might be approached in a compassionate, non-confrontational way. “When you talk to people in stores, your attitude matters,” Marcella said. “If you become aggressive you make an instant enemy. The best thing is to smile, be sweet, and just ask questions: Are you aware that BC Covid regulations allow mask exemptions? Did you know…?”

I am a poet, journalist and author with a strong commitment to the environment and social justice. If anything, I have too many interests and too little time in a day to pursue them all. Film, poetry, literature, music, mythology, and history probably top the list. My musical interests lie firmly in rock and blues with a smattering of folk and world music. I consider myself lucky to have lived during the great flowering of modern rock music during its Golden Age in the late 1960s/early '70s. In poetry my major inspirations are Dylan Thomas, Rilke, Neruda and the early 20th century British/American poets: Auden, Eliot, Cummings. My preferred cinema includes the great French auteurs, Kirosawa, Orson Welles, and Film Noir. My preferred social causes are too numerous to mention but include banning GMOs, eliminating poverty (ha-ha), and a sane approach to forest conservation and resource extraction. Wish me—wish us all—luck on that one!
View all posts by seanarthurjoyce →
This entry was posted in Coronavirus, COVID-19 lockdowns, Democracy, The Kootenays and tagged BC Covid mask exemptions, COVID dystopia, COVID laws in BC suspend democracy, COVID-19 and civil liberties, COVID-19 logical fallacies, COVID-19 mask exemptions, COVID-19 science, COVID19 laws contravene Canadian Charter, COVID19 legislation, COVID19 lockdowns cause harm, Hugs Over Masks, Kootenay Freedom, Questioning Covid narratives, Vladislav Sobolev. Bookmark the permalink.