Posted on January 1, 2017 by seanarthurjoyce

In a year that many will be all too happy to see the back of with so many tragic losses in the music world, the blues seems to have made something of a comeback. Surprising everyone, the Rolling Stones released Blue and Lonesome, their first new album in over a decade and first ever all-blues album. For my money, it’s the strongest album they’ve done since Exile on Main Street and Goat’s Head Soup. The muse only seems to grant artists a limited number of classic originals, so few of their recent studio albums have been particularly memorable. And the further the Stones stray from their blues roots, the more lost they seem. The closest Mick and the boys got to the kind of raw vitality heard on Blue and Lonesome was their mid-90s venture Stripped. A sideways take on the ‘unplugged’ trend of the day, the set breathed new life into their old classics, including rare oddities like The Spider and the Fly, probably not performed since it was originally recorded 30 years earlier in 1965. With their global stature, let’s hope the new album will provide a trickle-down effect that helps all blues artists.

Of course, the blues remains a perennial and vital genre of music. But its heydays seem mostly in the past now as the greats leave us, most recently B.B. King. With a few notable exceptions like Porter Davis, Derek Trucks and Joe Bonamassa, younger musicians seem more intent on creating New Folk or Alt Folk than in exploring the blues. As the Boomers have reached senior citizen status, the music that underpinned a generation of astonishing music is fading with them. The sheer range of genres the blues has influenced is breathtaking—from the early rock ’n roll of Elvis and Chuck Berry through the English blues scene of the mid-60s with Alexis Korner and the ever-durable John Mayall, boogie rockers the likes of Savoy Brown and Foghat, and even hard rock pioneers Deep Purple and Black Sabbath. I find it strange that so many young black artists have chosen to pursue gangsta rap or vapid pop music. It’s as if they’ve lost touch with their own roots—the gospel, soul, funk and blues that spurred the greatest musical revolution in history.

Music promoter extraordinaire Frank Roszak seems intent on countering this faltering trend, with a massive stable of blues artists from across North America. Since I published my review of Holly & Jon’s Shufflin’ the Blues, Roszak contacted me and has been sending me review copies of the bands he represents. It’s refreshing to know that so many musicians see the blues as their life path. Again, however, most of the artists in Roszak’s stable seem to be in the 40-plus age bracket, even 50-plus. And most of them, interestingly, seem to be white, in contrast to the original blues greats. Many of them are paying reverential tribute to their blues heroes, like Derrick Procell’s shout-outs to the legendary Howlin’ Wolf on Why I Choose to Sing the Blues. The CD sticker that reads ‘New Blues, Old Souls’ sums it up. Let’s face it: no one could ever replace the growlin’ baritone of the Wolf. But Procell and collaborator Terry Abrahamson stay true to the spirit of the legend. At times Procell’s voice and groove reminds me of Seventies era Steve Winwood. The arrangements are superb, and original songs like The Eyes of Mississippi  and The Wolf Will Howl Again have the potential to become New Blues standards in their own right.  (http://www.derrickprocell.com/aboutderrick.html) 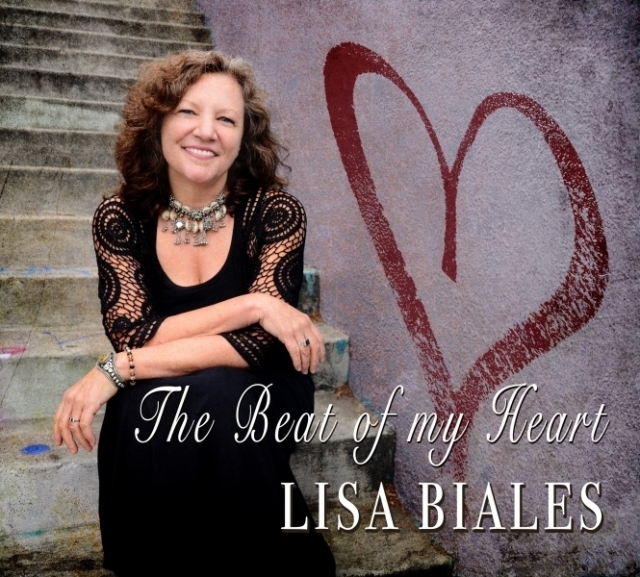 Just out is Lisa Biales’ album The Beat of My Heart, inspired by her mother Alberta Roberts‘ pressing of the song Crying Over You in 1947. Biales doesn’t have the typical blues-mama voice steeped in whiskey and cigarettes—it’s a little too pristine for that—but she nails the good-time spirit of the blues, propelled by groovin’ horns and gospel choruses. Messin’ Around With the Blues has the juke joint swing and tinkling ivories that put it in a similar league with the classic version by Memphis Slim. Said I Wasn’t Gonna Tell Nobody, written for the Abyssinian Baptist Choir by Professor Alex Bradford, is an energized Southern church stomp—a moonshine jug brimming with the wellspring that inspired early rockers like Little Richard. Crying Over You, the song written by Biales’ mother Alberta Roberts, has the jazzy shuffle of a Billie Holiday tune. It’s a slow, sensual groove Biales inhabits easily on other numbers like Wild Stage of Life and Romance in the Dark. Brotherly Love ends the album with a plaintive appeal for unity in a fractured age, beautifully rendered by Biales.

The Beat of My Heart is a solid, joyful blues album that could easily capture for Biales the career in music her mother was unable to pursue. At times her voice reminds me of the crystal clarity of Holly Hyatt on Shufflin’ the Blues. It’s a deeply personal effort and a powerful life journey for Biales, from finding the 78 of her mother’s record to making her own album in Studio City, California with Grammy Award winning producer Tony Braunagel, who also plays a snappy drum kit. Braunagel mustered a line-up of top tier studio musicians to back Biales, including veteran bassist Larry Taylor.  http://www.lisabiales.com

Jack Mack and the Heart Attack Horns—another Roszak stablemate—has released Back to the Shack, another album that reads like a tribute to the greats, with elements of country blues and soul confidently delivered. The album features a guest spot with the legendary Mike Finnigan, a keyboard player who may not be a household name but who’s played with the greats as far back as Jimi Hendrix. The band was discovered in 1981 by Glenn Frey of the Eagles, who generously helped arrange their first recording. Back to the Shack lists as inspiration a Who’s Who of Blues and Soul, including James Brown, B.B. King, Solomon Burke, Otis Redding and “so many others.” Singer Mark Campbell’s vocals clearly recall these greats with a fluency and ease that seems effortless. http://www.jackmack.com

We Canadians can rock ’n roll or shuffle the blues with the best of them, as the Smoke Wagon Blues Band’s new album Cigar Store proves. Once again this is blues to boogie to, built on the unbreakable chassis of Hammond organ, sax, blues harp and guitar. Fronted by vocalist and harp blower Corey Lueck, often the band’s original compositions explore historical themes, a penchant shared by many Canadian artists, from Colin James and Colin Linden in the blues to Bruce Cockburn, James Keelaghan and Stephen Fearing in folk. Driven by Lueck’s harp groove, Hoodoo Woman is a standout track that pays tribute to Junior Wells’ Hoodoo Man Blues while carving out its own niche. There aren’t many of the original blues harp masters still standing so it’s a joy to hear Lueck blowing up a storm. He and Jagger on Blue and Lonesome are breathing fire into a revered tradition of blues harp masters. Bravo! http://www.smokewagonbluesband.com

Like the Smoke Wagon Blues Band, Mississippi Heat on Cab Driving Man serve up their blues with Chicago flair. But with a genuine blues mama—Inetta Visor—handling vocals, you can hear echoes of Big Mama Thornton or Sister Rosetta Tharpe. It came as a shock to me that Mississippi Heat have been around for 25 years, led by blues harp player extraordinaire Pierre Lacocque. The fact that I’d never heard of them is perhaps indicative of the fact that the blues has lost much of its prominence in the public mind. That, combined with the advent of the million-channel universe made possible by the Internet, makes it much harder for accomplished veterans like this to rise above the crowd. The playing is consistently excellent throughout. Lacocque is a worthy successor to the tradition of blues harp greats like Little Walter and Paul Butterfield. This band would heat up any room with bodies in motion. http://mississippiheat.net

One of the greatest discoveries of the albums Roszak has sent me is the new Reverend Freakchild release Preachin’ Blues, a selection of stripped down blues classics including In My Time of Dyin’, Preachin’ Blues and Grinnin’ in Your Face. The Reverend is digging deep, performing solo acoustic Delta blues on National resonator guitar and harmonica. Here’s the thing: when I first put this album on, I could have sworn it was a black man’s voice, but it isn’t. This is one white dude with soul. Reverend Freakchild’s loose, conversational performances eerily echo the originals he’s quoting: Son House, Blind Lemon Johnson, and the Reverend Gary Davis. This is how it all started, folks—a lone guy on the front porch beatin’ the devil out of his guitar. Although his harp work is more reminiscent of Bob Dylan than Junior Wells, it melds seamlessly with his metal resonator. Consistent with the eclecticism of 21st century spirituality, his ‘preaching’ is more “philosophical investigation” than Bible-thumping, yearning for the light even as he acknowledges that, “death is part of life.” A more true-blue blues message would be hard to find. http://www.www-reverendfreakchild.org/bio/

I am a poet, journalist and author with a strong commitment to the environment and social justice. If anything, I have too many interests and too little time in a day to pursue them all. Film, poetry, literature, music, mythology, and history probably top the list. My musical interests lie firmly in rock and blues with a smattering of folk and world music. I consider myself lucky to have lived during the great flowering of modern rock music during its Golden Age in the late 1960s/early '70s. In poetry my major inspirations are Dylan Thomas, Rilke, Neruda and the early 20th century British/American poets: Auden, Eliot, Cummings. My preferred cinema includes the great French auteurs, Kirosawa, Orson Welles, and Film Noir. My preferred social causes are too numerous to mention but include banning GMOs, eliminating poverty (ha-ha), and a sane approach to forest conservation and resource extraction. Wish me—wish us all—luck on that one!
View all posts by seanarthurjoyce →
This entry was posted in blues, Music and tagged album reviews, blues, Frank Roszak, Jack Mack, john mayall, LIsa Biales, Mississippi Heat, Reverend Freakchild, rock, rolling stones, Smoke Wagon Blues Band. Bookmark the permalink.