Posted on August 13, 2019 by seanarthurjoyce

Aldous Huxley has since my youth been a huge influence on my thought and writing. Most famous for his essential novel of technological dystopia, Brave New World, his essays and novels spanned almost every conceivable topic in the arts and sciences. His final novel, Island, was his concept for a utopia based on a lifetime of study. Inevitably, it goes wrong, as all utopias do. But some 60 years before today’s critiques of capitalism, in Island he deftly satirizes the economic system that has so degraded our global environment. “Armaments, universal debt, and planned obsolescence—those are the three pillars of Western prosperity. If war, waste and moneylenders were abolished, you’d collapse. And while your people are over-consuming, the rest of the world sinks more and more into chronic disaster.” (Island, Granada Publishing, London, 1979 ed., originally published 1962, p. 170.) 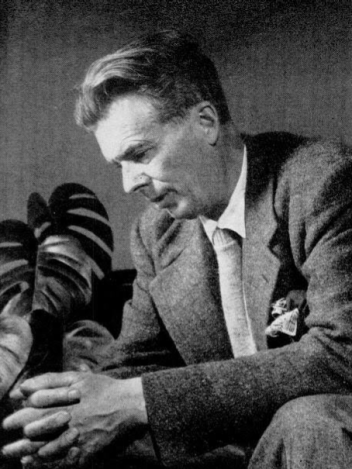 Huxley was perhaps among the last of the ‘Renaissance men,’ whose intellectual capacities and achievements ranged wide and deep, with a penetrating perception and subtlety of thought. Such a contrast to the digital era, with its emphasis on the specialist, the one-trick pony who knows everything about only one area of expertise but almost nothing else. Yet cultivating interest in a broad range of subjects, and reading widely, is the best way to develop a balanced perspective on the world. It was an omnivorous habit of mind Huxley called “rich mixed feeding.”[1]

As even the Harvard Business Review has noted recently, the age of the specialist may be ending. “The future may belong to the generalist,” notes writer Vikram Mansharamani in ‘All Hail the Generalist.’ “There appears to be reasonable and robust data suggesting that generalists are better at navigating uncertainty.” Not to mention, having a much broader view of the world.

Huxley wasn’t just a cool intellectual though. He seemed to possess intellect and heart in equal capacity, and cultivated a well-informed intuition. He was among the earliest thinkers in the West to explore Buddhism, along with Alan Watts. Huxley also explored shamanic cultures and the use of hallucinogens in his quest for spiritual enlightenment. In fact, with Canadian scientist Dr. Humphry Osmond, he coined the term ‘psychedelic.’ As Huxley’s second wife Laura Archera Huxley wrote in her biography of Huxley, This Timeless Moment, the 1960s popular drug culture succumbed to the use of LSD, psilocybin and mescaline as a recreational drug and paid the price for it. Now, five decades later, there’s been something of a revival of hallucinogens as a path to spiritual development.

In this passage from Huxley’s biography, published in 1968, she writes about the final days of his first wife Maria, who was dying of cancer in 1955. It’s an amazing document, quoted directly from Huxley’s diaries, showing what incredible insight, intuition and compassion the man possessed. It also reveals his pioneering use of the technique in the mid-1950s that we today sometimes refer to as ‘healing touch,’ or what he called ‘magnetic passes.’ There’s a beautiful section where he relates the tender way he eased his wife into her death using a form of light hypnosis that we today would probably call ‘guided meditation.’ He does it with the skill of a Buddhist master, whatever your view of the concept of transmigration of souls and the bardo. In my view, it’s a passage that could be used to guide anyone through their final hours with compassion, love and dignity. Sixty-five years later, hospice care workers could still learn a lot from Huxley. All quotations are taken from This Timeless Moment, Laura Archera Huxley, Ballantine Books, 1968, pp. 19–22.

“I spent a good many hours of each day sitting with her, sometimes saying nothing, sometimes speaking. When I spoke, it was always, first of all, to give suggestions about her physical wellbeing. I would go through the ordinary procedure of hypnotic induction, beginning by suggestions of muscular relaxation, then counting to five or ten, with the suggestion that each count would send her deeper into hypnosis. I would generally accompany counting with passes of the hand, which I drew slowly down from the head towards the feet. After the induction period was over, I would suggest that she was feeling, and would continue to feel, comfortable, free from pain and nausea, desirous of taking water and liquid nourishment whenever they should be offered. These suggestions were, I think, effective; at any rate there was little pain and it was only during the last thirty-six hours that sedation (with Demerol) became necessary. These suggestions for physical comfort were in every case followed by a much longer series of suggestions addressed to the deeper levels of the mind.”

“Overhead the sky was more deeply blue than ever. But in the west there was a great golden illumination deepening to red; and this was the golden light of Joy, the rosy light of Love. And to the south rose the mountains, covered with snow and glowing with the white light of pure Being—the white light which is the source of the coloured lights, the absolute Being of which love, joy and peace are manifestations, and which all dualism of our experience, all the pairs of opposites—positive and negative, good and evil, pleasure and pain, health and sickness, life and death—are reconciled and made one. And I would ask her to look at these lights of her beloved desert and to realize that they were not merely symbols, but actual expression of the divine nature; an expression of Pure Being, an expression of the peace that passeth all understanding; an expression of the divine joy; an expression of the love which is at the heart of things, at the core, along with peace and joy and being, of every human mind. And having reminded her of those truths of our being, which some know consciously but only theoretically and which a few (Maria was one of them) have known directly, albeit briefly and in snatches—I would urge her to advance into those lights, to open herself to joy, peace, love and being, to permit herself to be irradiated by them and to become one with them. I urged her to become what in fact she had always been, what all of us have always been, a part of the divine substance, a manifestation of love, joy and peace, a being identical with the One Reality. And I kept on repeating this, urging her to go deeper and deeper into the light, ever deeper and deeper.” 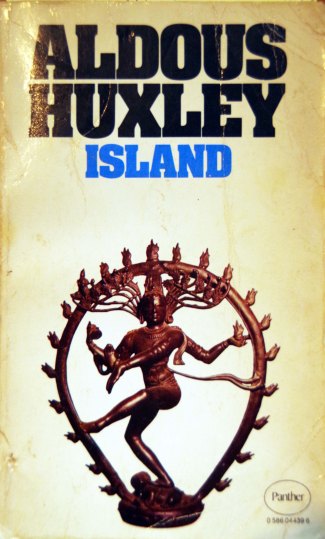 “So the days passed, and as her body weakened, her surface mind drifted further and further out of contact, so that she no longer recognized us or paid attention. And yet she must have still heard and understood what was said, for she would respond by appropriate action, when the nurse asked her to open her mouth or swallow. Under anesthesia, the sense of hearing remains awake long after the other senses have been eliminated. And even in deep sleep, suggestions will be accepted and complicated sentences can be memorized. Addressing the deep mind which never sleeps, I went on suggesting that there should be relaxation on the physical level, and an absence of pain and nausea; and I continued to remind her of who she really was—a manifestation in time of eternal, a part forever unseparated from the whole, of the divine reality; I went on urging her to go forward into the light.”

“A little before three on Saturday morning the night nurse came and told us that the pulse was failing. I went and sat by Maria’s bed and from time to time leaned over and spoke into her ear. I told her that I was with her and would always be with her in that light which was the central reality of our beings. I told her that she was surrounded by human love and that this love was manifestation of a greater love, by which she was enveloped and sustained. I told her to let go, to forget the body, to leave it lying here like a bundle of old clothes and to allow herself to be carried, as a child is carried, into the heart of the rosy light of love. She knew what love was, had been capable of love as few human beings are capable. Now she must go forward into love, must permit herself to be carried into love, deeper and deeper into it, so that at last she would be capable of loving as God loves—of loving everything, infinitely, without judging, without condemning, without either craving or abhorring.” 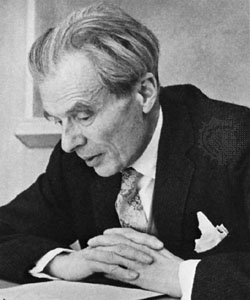 “And then there was peace. How passionately, from the depth of a fatigue, which illness and a frail constitution had often intensified to the point of being hardly bearable, she had longed for peace! And now she would have peace. And where there was peace and love, there too there would be joy. And the river of the coloured lights was carrying her towards the white light of pure being, which is the source of all things and reconciliation of all opposites in unity. And she was to forget, not only her poor body, but the time in which that body had lived. Let her forget the past, leave her old memories behind. Regrets, nostalgias, remorses, apprehensions—all these were barriers between her and the light. Let her forget them, forget them completely, and stand there, transparent, in the presence of the light—absorbing it, allowing herself to be made one with it in the timeless now of present instant. ‘Peace now,’ I kept repeating. ‘Peace, love, joy now. Being now.’”

“For the last hour I sat or stood with my left hand on her head and the right on the solar plexus. Between two right-handed persons this contact seems to create a kind of vital circuit. For a restless child, for a sick or tired adult, there seems to be something soothing and refreshing about being in such a circuit. And so it proved even in this extremity. The breathing became quieter and I had the impression that there was some kind of release. I went on with my suggestions and repeating them close to the ear. ‘Let go, let go. Forget the body, leave it lying here; it is of no importance now. Go forward into the light. Let yourself be carried into light. No memories, no regrets, no looking backwards, no apprehensive thoughts about your own or anyone else’s future. Only light. Only this pure being, this love, this joy. Above all this peace. Peace in this timeless moment, peace now, peace now!’ When the breathing ceased, at about six, it was without any struggle.”

I am a poet, journalist and author with a strong commitment to the environment and social justice. If anything, I have too many interests and too little time in a day to pursue them all. Film, poetry, literature, music, mythology, and history probably top the list. My musical interests lie firmly in rock and blues with a smattering of folk and world music. I consider myself lucky to have lived during the great flowering of modern rock music during its Golden Age in the late 1960s/early '70s. In poetry my major inspirations are Dylan Thomas, Rilke, Neruda and the early 20th century British/American poets: Auden, Eliot, Cummings. My preferred cinema includes the great French auteurs, Kirosawa, Orson Welles, and Film Noir. My preferred social causes are too numerous to mention but include banning GMOs, eliminating poverty (ha-ha), and a sane approach to forest conservation and resource extraction. Wish me—wish us all—luck on that one!
View all posts by seanarthurjoyce →
This entry was posted in Books, memoir, social commentary, Writing and tagged Aldous Huxley biography, Aldous Huxley Brave New World, Aldous Huxley Island, Aldous Huxley on hospice, Aldous Huxley spirituality, hospice care, Laura Archera Huxley bio. Bookmark the permalink.